One of the coolest things about attending conventions, specifically Gen Con for me, is that you have the opportunity to meet some pretty hip industry folks. While I was perusing the booths before the show officially started, I happened across Micah Skaritka. Skaritka is a renaissance man of sorts. He’s a part of the industrial band Cruciform Injection, an artist, author, and designer for High-Voltage Software.

Skaritka and I had the opportunity to talk about the first-person shooter The Conduit, which is currently slated the Wii. Over the course of the conversation, he revealed to me how The Conduit was picked up by Nintendo, how the game controls, and the difficulties of designing a game for the Wii. He also commented on some of the barriers that Nintendo’s E3 peripheral unveils caused, as well as bringing a Wii game to the next level.

Hit the break for our full conversation. 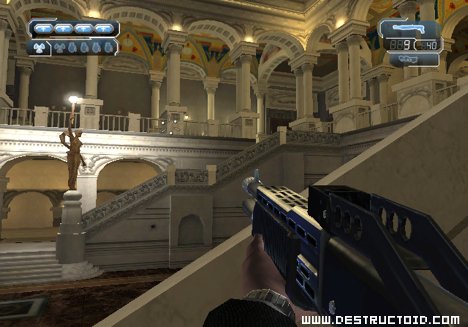 DESTRUCTOID
We talked earlier about a Wii build for PAX

MICAH SKARITKA
Right, we did a Wii build for PAX. From my understanding, Nintendo contacted us and wanted to put it up front.

Can you talk to me a little bit about making the game? Specifically for the Wii — did you help with the Wii build?

It’s actually a demo [of The Conduit]. People will [sic] be able to play the game. The level [on the demo] is one I actually [helped create] for the game. The game itself is actually one of High Voltage’s original IPs. The company is really excited about this…We tweaked [the build] a little bit for PAX. But when [Nintendo] saw [the demo at E3] they were impressed. Nintendo need[s] something that show[s] off the Wii for the hardcore.

The whole idea for the game was for the casual market. But as we went on, we realized that there weren’t any first-person shooters on the market with good graphics on the Wii. I think a lot of developers that make FPSs on the Wii say, ‘let’s do this so [the player] can use the Wii shooter’ And it doesn’t work. You lose half your control.

So when we did it, we said ‘let’s use [the controls] for what [they] were intended for.’ The nunchuck has the throw grenade [command] on it. For a while it was crazy, the sensitivity on the Wii is almost a nightmare. At first if you scratched your nose or turned around if someone came in the room, you would throw grenades. We got the sensitivity on that, so it’s brilliant. It’s almost second nature now. You don’t throw the grenade unless you want to.

We use the Wii motion to some degree. A lot of games use it, and it’s kind of annoying. What we tried to do is really incorporate the easy [motions]. We don’t have any of the pull back or push forward ones. But we did a little bit of the twist, but it’s subtle…A lot of our weapons have a horizontal path. If you move the Wiimote to the left and right you are actually changing your reticule and the way the bullets travel. You can slice through the air and different directions. Little stuff like that really takes first-person shooters to the next level on the Wii. 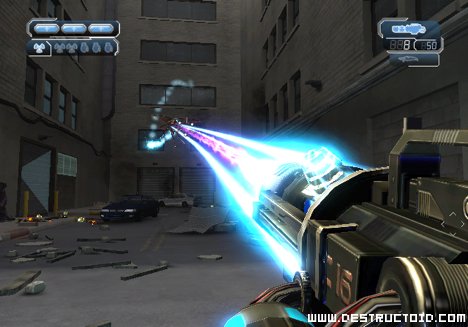 Has there been trouble to work for Nintendo in terms of Multiplayer?

Right now, we’re still getting it networking. We’re still seeing what our limits are in terms of environment sizes and weapon sets and how many players we can get in there. It’s still early, early on the multiplayer. We’re just now wrapping up the single-player. We have a whole [different] cycle for [the multiplayer].

Are you going to use friend’s codes or anything dumb like that?

It’s still all up in the air.

Are you going to use the voicechat device they showed at E3?

That is something that we talked about. I don’t know if we’re going to use it or not. It’s one of those things where it’s so new and we’re at the point in the project where we need to know what we have to play with. I think we have already established that we probably won’t be doing the 1:1 ratio. It was at E3 when they announced that, and it was at that point where we were already too far into the project to retrofit it. 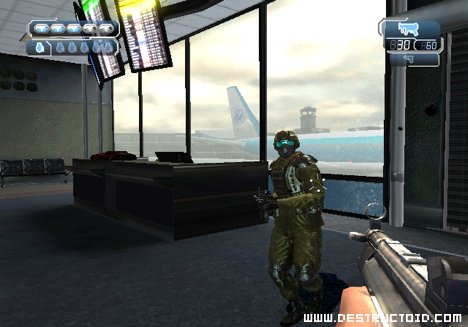 Do you feel that you can contend with the 1:1 ratio?

The controls in the game are 100% fully customizable. You can remap all of your buttons. We were also talking — I don’t know if it will get in the game or not —  we’re trying to get all of the UI to be ‘splicable’ by clicking and dragging. So — you can move your weapons HUD wherever you want on the screen.

I always read it’s hard to get these things (multiplayer) through Nintendo.

It is. EA had their own servers when they were doing Medal of Honor.

Do they expect that out of you then?

We’re not sure which way we’re going. It depends who picks us up. I really want split-screen, but graphically…we’re pushing the graphics on the game engine. We have projected lighting, projected textures, dynamic lighting. The water effects are crazy. It’s all stuff you haven’t seen on the Wii. Some people would say its’ getting to the point where it’s almost looking like a next-gen game.