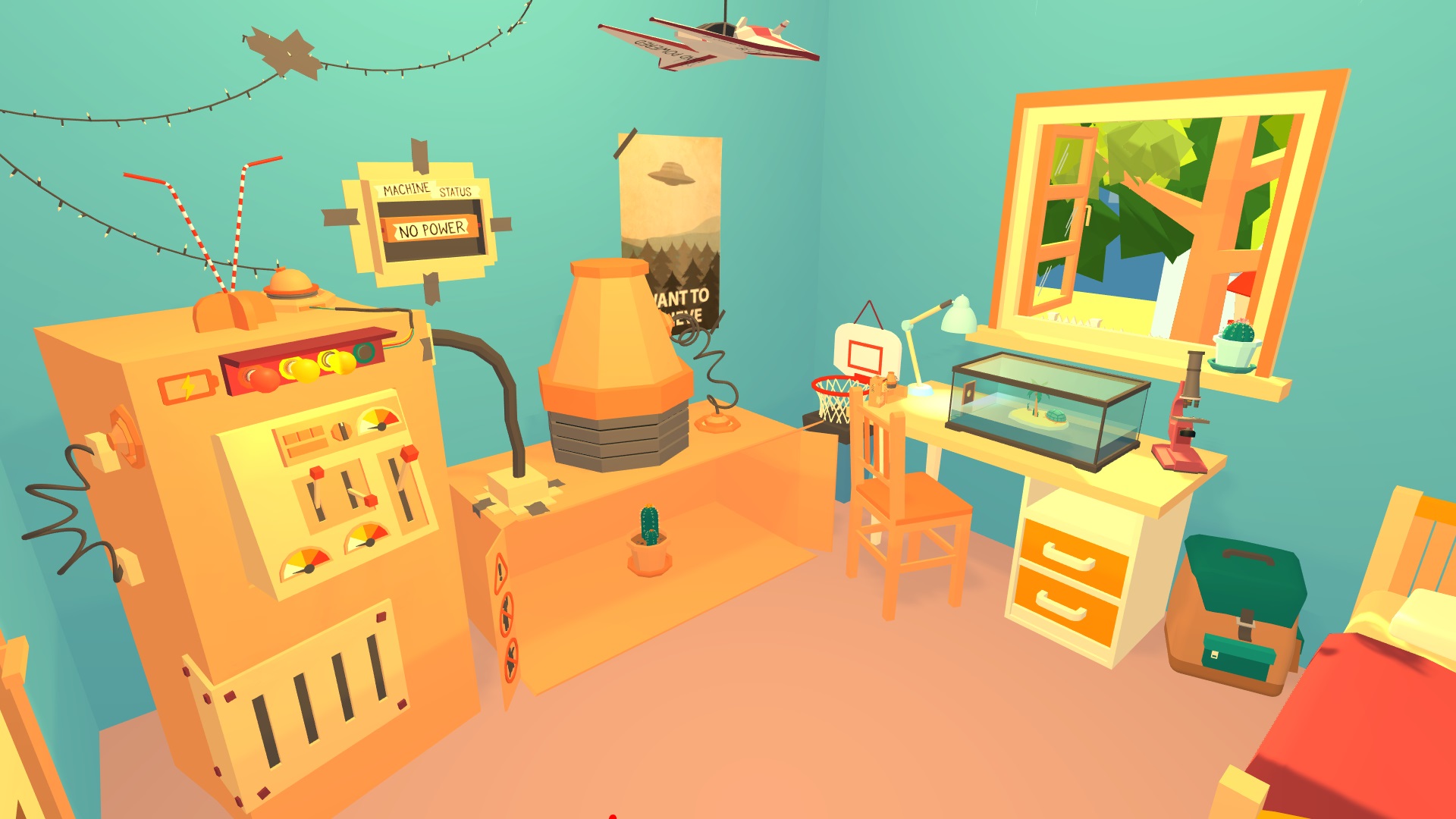 The award-winning student team talks to me about VR, tall players and dealing with pesky headset wires

The well-deserved winner of the Most Innovative Newcomer award at the PLAY creative games festival, held in Hamburg, Germany from 1–5 November, was Tell Me What You See, a co-op VR puzzle-adventure game. It is being developed by Pesky Bees, a Copenhagen-based student dev team. A lot of the games on display at the festival showed creative flair in their own special ways, but Tell Me What You See had a distinctive style and charm, and earned brownie points in making use of tricky HTC Vive VR technology.

The build I played at the festival was a two-player demo. One player would sit at a computer screen, and would have a zoomed-out overview of the entire level, which is a diorama of a child’s bedroom. The other player would wear the Vive headset, and would be in the life-sized bedroom. Communicating via headset microphone, the player at the computer monitor assists the second player in escaping the room, using machines straight from a child’s vivid imagination that are made out of cardboard boxes.

The art style is a joy, and all of the interactions with objects in the game feel natural. As an aside, I’ll admit this was my first attempt at a VR game, and I embarrassed myself a fair bit. I was so taken aback by everything being in front of my face that I giggled uncontrollably – and loudly – throughout the entire experience. I also collided with one of the team, who were running the demo booth themselves, and was not very graceful in plonking myself on the floor to “climb” into an object.

But out of all of the exhibits, it was the one with which I had the most fun – which is why I loved this game so much, and why I just had to get an interview with the developers. Keep on reading for my chat with the team!

What made you specifically want to develop a VR game?

While the economic sustainability of developing for VR seems to be uncertain, we do consider it a format full of potential for expressiveness and innovation. However, making the game in VR was just the beginning of the plan. We know more students creating projects in VR than in any other platform, so that would definitely not set us apart. If we chose VR is because we had a very specific take on it and we wanted to see how far we could go with that idea.

What specific difficulties did you encounter making a VR game compared to a “normal” game?

VR adds a new layer of difficulty on top of every part of the development process. First of all, the production phase demands higher requirements for hardware and actual physical space than any other kind of game. Also, setting up playtests, recording playthroughs, traveling to festivals… becomes more challenging. The fact that our game was also online didn’t make things easier.

But most importantly, making a game for VR sometimes requires a completely different mindset. Level design, for example, needs to consider the actual physicality of the player. For a long time, one of the puzzles in the game was based on the VR player not being able to reach a certain object. That worked until our first player who was two metres tall tried the game and proved the design to be wrong.

Why did you decide to make a game that required working in pairs?

I think that most people who try VR realise that there is something magical about that digital space that you are suddenly inhabiting. Somehow, even if the hardware is still far from perfection, the trick works and we feel transported to another place. With our game, we wanted to open a window for a second player to accompany the VR player through this experience.

The main goal was to see how those two players would collaborate in a common space that is presented to them in such a different way. That was the foundation of the project and we always tried to make our design, sound, and visual choices based on that concept because we considered it to be worth exploring.

From there, it was all about making the game enjoyable for both parts. We didn’t want the PC player to just enable the fun of the VR player. We tried to understand the strengths and weaknesses of both platforms and build a game in which those technologies were not competing but enriching each other’s experience. This required careful puzzle design and many iterations of the mechanics that can be performed by both players.

You developed the demo as a student project. Do you think the process of working on a game as a group of students is any different to working on one full-time at an independent studio?

Since our roles were clearly defined from the start (programmer, artist, game designer, and sound designer) the workflow was surprisingly similar to the one of a small independent studio. However, there were of course some differences. A negative one is that we couldn’t commit full-time to the development. The positive side is that our decisions were not constrained by the economic viability of the project; the priority was always for the game to be as close to our initial vision as possible. We knew that this situation was not likely to be repeated in the future, so we enjoyed the process of developing with that freedom.

I think I accidentally punched one of the people working the booth when playing your game. How often have you been hit by people trying out the demo?

We became experts at untangling cables while remaining unnoticed by the players. What we couldn’t avoid is some of them trying to lie down on what is just a digital model of a bed and falling as a result.

Oh dear. Thanks for the interview, guys! The game is still in development, but follow the team on Twitter for further updates.