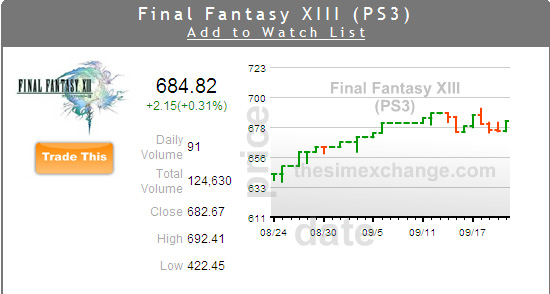 Coaxing an analyst out of his cave is a complicated process. First, we must fast for 13 days, and then sacrifice one of the members of the staff from Destructoid Network (usually Japanator). Then, you wait. Perhaps they will come out and throw you a glimmer of hope, sometimes it will be something that is even more difficult to translate than the moon language.

Jesse Divinich is an analyst for the simExchange, and he was delighted by the sacrifice of one of Chad’s dolphin friends (I’m sorry for Cocoapuffs, Chad), and agreed to spend a few minutes with me talking about this holiday season for the games market.

The simExchange uses a prediction market, which is essentially a group of users (feel free to sign up for it if you want) who work to predict how games and systems will do in a particular month and for the total life of the SKU. Figuring out what all this data means, and why these things happen is where Jesse steps in.

Let’s jump into the interview!

Back at E3, we saw the announcement of the PSP Lite from Sony. What sort of impact is it going to have on the system’s sales come its release in October?

Here in America, there’s been a significant rise is sales for the October month. Normally, we see a spike when it comes to the holiday season, but the PSP is getting that jump early, and it’s clearly due to this, combined with the system’s price cut down to $169.

Will it put any pressure on Nintendo and the DS?

Not really. Nintendo’s been so incredibly successful with the DS, that even a large jump by Sony won’t shake them from their position. The two systems are able to live together in relative harmony, but it’s not like Nintendo will need to do anything more than what they’re already doing.

With Sony’s holiday lineup, will they be gaining any ground on the competition?

Well, right now, the Wii and the Xbox 360 are outselling the PS3 2:1. Looking at the prediction market, Sony is actually expected to stay outsold 2:1 throughout the holiday. The interesting thing is, looking at lifetime sales for the SKU, both consoles are expected to sell 50 million units. So somewhere in that gap, Sony is going to get a huge boost and catch up. It’s just that we don’t know when that is going to be.

Will the implementation of Home lend a hand to Sony in getting that together?

The market data didn’t change when Sony announced Home, or when they announced the delay. Sony’s playing catch-up with Xbox Live, and while Home is something of a completely different nature than Live, it’s still them making an entry into the online market. It may get close to or on par with Live, but if anything, it’s just a regular release from Sony. It’s them trying to stay competitive.

Microsoft has Halo 3 coming out next week — how will that affect the number of consoles sold?

There’s been a huge spike in sales for Halo 3. Back in August, they sold around 250,000 units. Now, the prediction market for September has them pegged at 400,000 units. So, Halo 3‘s impact is definitely noticeable. The price cut announced by Microsoft actually help a bunch, too. Before the announcement, we were expecting them to sell about 200,000 units, and then see a similar increase in sales.

Looking back to Microsoft’s billion dollar write-off, how did that affect sales?

We were initially expecting the PS3 to outsell the 360 at that time in July, simply because it was such a huge setback for them. Yet, it didn’t happen. Microsoft managed the situation well, and because of the strong 360 library, it didn’t send people away from the console. They could have handled the situation better, but they still did a good job with it.

Nintendo has been heavy with its push towards the casual market, both with the Wii and the DS. They’ve obviously shown great success with that. Is this going to end up being a fad at some point, or will it continue to go on? Also, do you think it’ll end up ostracizing the casual gamer?

Looking at the lifetime sales for the Wii, we’re seeing a 2:1 prediction for the SKU. This is a pretty strong indication that they’re not producing a fad here. If Nintendo keeps selling at the rate that they have been, then they will be forcing third parties to keep up with support of great titles. It’ll just be too much money passed up if they don’t.

As for the hardcore market, I think the sales of Manhunt 2 on the Wii will be the definitive answer for how strong the hardcore market is on Nintendo’s console. It’s a title that isn’t being pushed by Nintendo as part of its plan, and it’s a game that would really only apply to the hardcore crowd. If you look at the numbers for Resident Evil 4 for the Wii, the game sold very well, but had a lot of momentum behind it. Manhunt 2 will be a good test of that.

In the past couple of weeks, have there been any spikes or slumps in the gaming market?

Nothing coming out of Tokyo Game Show has made any changes to the flow of the prediction market. Sony’s announcement of rumble in the PS3 controller is something that players had been expecting for a while, and they were just waiting for Sony to finally come out and admit it. The last spike that we saw coming from an announcement was the PSP Lite. Other than that, it’s just been the increase in sales towards the holidays.

Well, judging from how sales have been for September, there’s been a 50% increase year over year, and so by this Christmas season, we should be seeing growth in the double digits once again for the industry. Over all, it’ll be yet another great season for the video game industry.