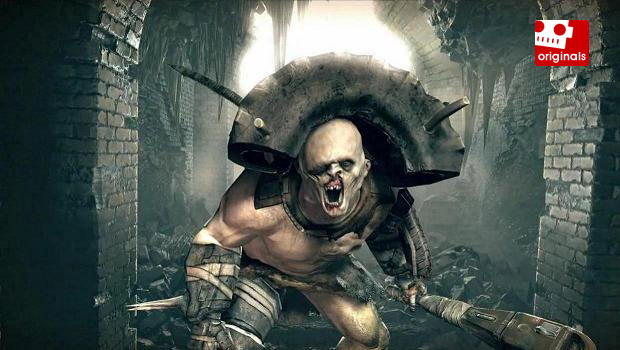 My interview with longtime id Software member Tim Willits began with my pitch for a Destructoid crossover-promotion with id and the Hilton that houses QuakeCon.

It’s called “GET RAGED!” The rules are whoever trashes their hotel room and inflicts bodily harm in the most creative ways wins a Rage t-shirt. Willits wasn’t very receptive to my idea, but he agreed to sit down and talk Rage with me anyway. His loss, just saying. 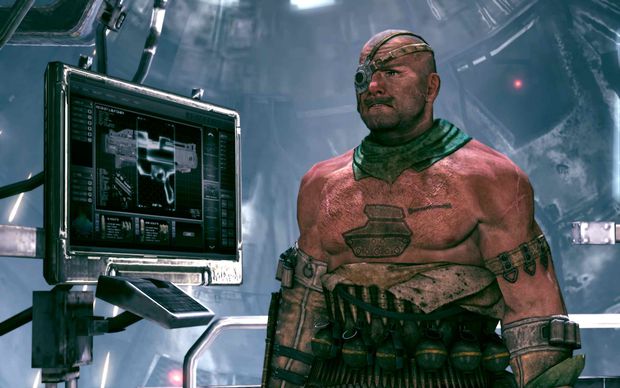 What’s your current role on Rage?

I’m the creative director. It’s very similar to what we did to Doom 3. Matt Hooper is the design director so I work with him. We basically built Doom 3 together — remember it was only 33 people. That’s the great thing about id: it’s a small group of guys. Me and the other guys rolled right into Rage. I do a lot of similar things, but Matt does a lot of the heavy lifting.

Much like Doom 3, one of the most impressive things about the game is the animation. Enemies have elaborate animations where they fall down and shoot you or jump from cover to cover — can you explain how that came about?

Where the game shines is in both our combat animations and AI system and how well they work together. When you were playing, you might have shot a guy and he grabs himself like this [Willits grabs chest] or you shoot them in the back and they do this [reaches for back], or you see them fall down. You think they are dead, but they slowly crawl to cover or shoot you from the ground. That’s awesome. It adds a whole layer to the system.

Then all the characters you meet are keyframed which is amazing because keyframing is a lot of work these days. It adds over-the-top animation that draws a lot of character into those NPCs [non-playable characters]. So it’s a mix between great keyframing for our main characters and good AI and animation for the enemies. 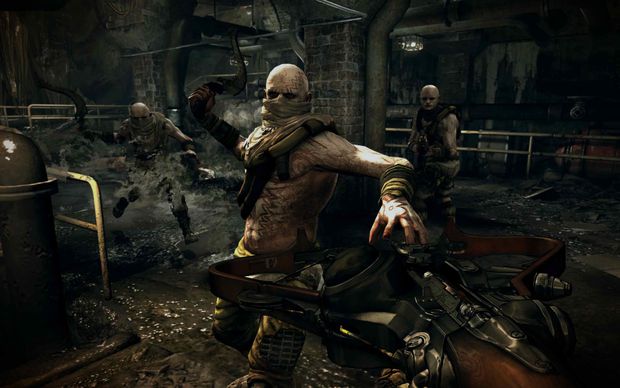 What was the thought process behind letting enemies jump from cover to cover, while the player cannot?

We started with one cover system that was interactive. You went up there, hit a button and went into cover. Then you hit another button and got out of cover. That kind of slowed the game down. Then we added an automatic cover system where you would go to flagged points and you’d lock-in to cover, but it really slowed the pace.

You can think about in your mind and go, “How is that going to really slow the pace down,” but we actually had it in and the pacing just didn’t feel right for us. So, we had two systems in that were fully functional and then poof. Gone!

Same thing with getting into vehicles. You’d go up to your buggy and it’d trigger this animation where you climb in. It was really cool about the first three times you saw it, but then you just want to get in and go. So we got rid of that. Same thing with the Wing Stick; we originally had a complex animation for that but it slowed it down. It just wasn’t fast and responsive.

That’s the great thing about id. We put stuff in, try it, test it out and if it doesn’t work — great, we throw it out!

One of the things that most impressed me about the time I spent with Rage was the cinematic score. What is the story behind that and who is the composer?

Christian Antkow is our sound and music director and he works with a number of guys. What Christian did was he worked with the programmers to create multiple layers of music based on what you are doing. So, if the combat intensifies, the music intensifies. If you combat in vehicles, you hear the combat vehicle music. We don’t have a soundtrack that triggers based on maps or anything like that. We have context-aware music tracks. 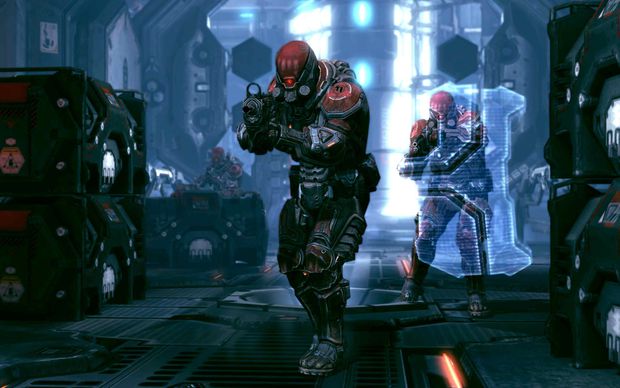 What are PC players going to get that they wouldn’t be able to do on a console?

The great thing about Rage is that all the assets that the guys at id create are all the same, regardless of the platform you play on. But, on PC what you can do is crank up the resolution, anti-aliasing, and increase the texture bumpers to get higher-res textures farther out. Then, you can take your cores and apply them to to transcoding, so those textures come in fast. Then, after we ship, you can download the SDK, but you need to have 64-bit.

You guys never built a full world like this before. The intro of Doom 3 had something going on, but not like this. Where did you start with Rage?

Historically, our games start here and end here, but with Rage we wanted to setup a world where you can feel things happened before you got there and things will happen after you leave. We went as far as to do a three-part comic book series with Dark Horse. The book’s story takes place ten years before you even show up; it’s all about Elizabeth and Cavassier who you meet in the game. We also have the novelization of Rage, if you want to read more about the game’s backstory.

It’s been a very conscious effort for us to make this world more than a single game experience, which really sets us up for anything we may want to do.

Has Bethesda consulted id, while you guys were making this world?

The great thing about the executive leadership at Zenimax and Bethesda is that they are letting us make this game. Todd Howard works a lot like we do. They said, ‘You guys been making games for a long time — keep doing that! We will support you, we will let you build the new Doom team and we’ll help sell the games. You guys just do what you do best.’ So, it’s really worked out great. 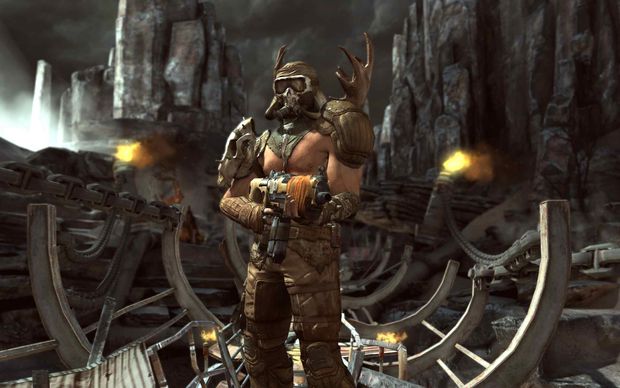 Do you see Rage being a game that people play at QuakeCon?

The vehicle combat in multiplayer is quite fun. I like it a lot. So, hopefully we’ll see it being played.

Is there any sort of fast travel you unlock in Rage?

No, but if you are in the wasteland and your car gets stuck or destroyed you’ll have to call the tow truck.  But, it’s expensive. If you want to get back to the town faster you can call the tow truck but it ain’t cheap.

What voice actors are involved in the game?

John Goodman. He’s the first guy you meet and he’s perfect. If you can have one actor that is perfect for a post-apocalyptic world, of course you have to pick John Goodman.  He kind of looks a lot like Dan.

There is some very good voice talent and a lot of guys we worked with in the past. We also have a lot of guys who had major roles in other games like Cain from Diablo, Drake from Uncharted — it’s fun to play and go, “Hey, that’s Drake and that’s Cain!”

Are there any missions or areas you can miss on your first playthrough?

Yes, sewers are definitely one of them. I bet you missed them when you played them. I bet you drove past all three [He’s right!] That’s three levels you missed and then there are the post-it jobs, the Stanley Express missions … there’s a lot of stuff. If you look around and listen to what the NPCs say and go out and find stuff, you’ll be rewarded. 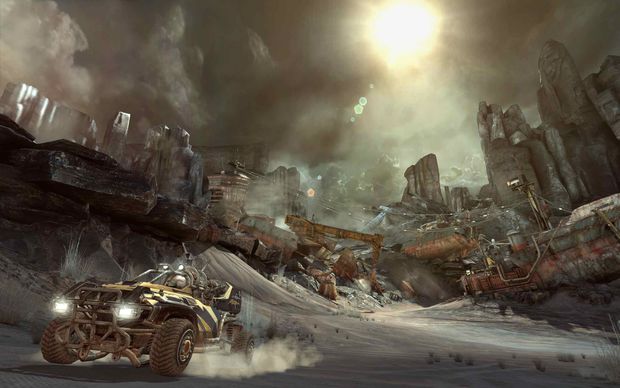 Id has always been innovative in its enemy design, but how do you keep that intact when all the enemies are human?

[Lost a bit of the recording here: Willits describes the various clans leading up to …] The Uncharted clan are not afraid of anything, they will hold their ground. One guy will drop a shield and another guy will step-up behind him and use him as cover. Then of course with mutants, skinny mutants and giant mutants they all have their very unique attacks. Rage is a long game but you won’t grow bored with fighting.

Does it feel weird to show off a single-player game at QuakeCon?

No, because the QuakeCon fans all love good games. If they didn’t like good games, they wouldn’t be at QuakeCon. I am excited about our multiplayer offering in Rage. It’s different. It’s not the cookie-cutter formula again — well, the formula we invented. Besides, people at QuakeCon just want to see good games.

Now that you have Hi-Rez showing off Tribes and all the Bethesda games here, QuakeCon feels a bit more like an expo. Does it feel different to you? 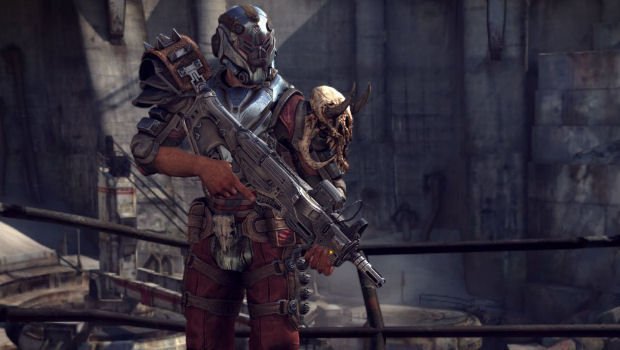 Are there any other games we’ll be seeing with the id Tech 5 engine, any time soon?

Well, the id Tech 5 engine is exclusive to the Bethesda family. There are other studios who are working with it but – everybody knows Doom is using it. Further down the road, I really can’t say.

When you were making Rage, you must’ve still hit some limits of what the hardware is capable of doing. Have you looked into what could be possible five years from now?

One of the great things about id Tech 5 is that it’s very scalable. John Carmack believes as we look to the future, we’ll be able to reutilize this engine and its capabilities. We push the 360 and the PS3 right to their limit. We encourage gamers to install the game to their hard drive. There’s a lot of legs to this tech and you’ll see it around for a long time.

I know you got your start as part of the Doom modding community. I was wondering if you’ve seen any of the crazy things people have done with the Doom engine the last couple years?

Yes, there are some very neat Doom mods out there that are very advanced. Modding games is still the best way to get into the industry. Pick an engine you like and make something cool with it.