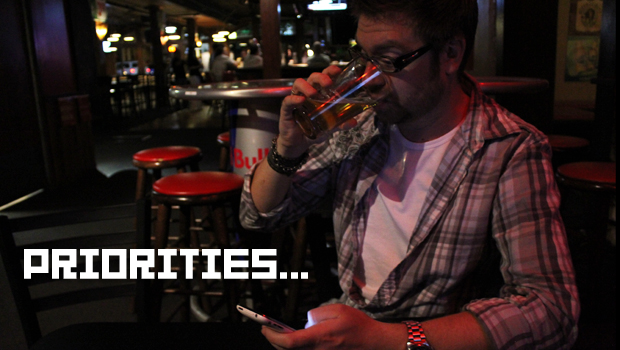 After its unveil in May and strong showing at E3, Starhawk is once again hiding within the walls of LightBox’s Austin office.

Thankfully, LightBox’s office is only a block away from Austin’s lively bar scene on Sixth Street, making for the perfect spot to coax new details out of LightBox president Dylan Jobe — an unusually cheerful, generous guy who genuinely cares about the game he is working on.

For those of you who missed our previous coverage of Starhawk, I’ll summarize Dale North’s excellent and lengthy preview. It’s the follow-up to PS3 multiplayer-only shooter Warhawk with a new focus on a single-player campaign and base building. The game’s combination of real-time strategy elements with team-based third-person shooting promises a refreshing change of pace from other shooters on the market. Personally, I can’t wait for it. I miss the days of team-based games where anything seemed possible, and Starhawk‘s “Build and Battle” system opens the doors to advance strategy and silly shenanigans.

Over a couple beers, we discuss Trenched, the PSN outage, Ladyhawke, Pagan theorists and Austin, Texas.

E3 was really great. It was interesting because when E3 went live it was just shy of one month of when we first announced in May.

At Sony’s E3 press conference, I was surprised the spotlight wasn’t put on Twisted Metal and Starhawk. Did you have any input on that?

No. I’ve been working with Sony for 12 years and as an employee for ten. If you remember me flailing around on stage with the Sixaxis Controller [in 2006], I got to see what happens behind stage. It’s a lot of business strategy and all of that stuff, so you just kind of hang on and wait for the opportunity. They didn’t ask us to do any on-stage stuff. In fact, we finished the gameplay trailer they showed only three days before the conference. It’s just whatever the Sony executives want and we give it to them. 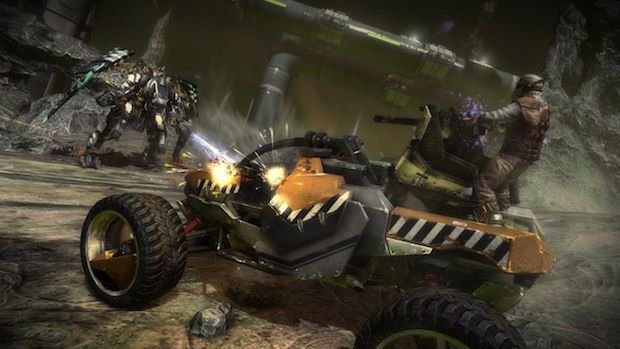 Did you have a chance to check out any games, at E3?

We went to see Trenched, Double Fine’s mech/tower defense game. Obviously, there are some similarities between it and Starhawk. I’m a big fan of their stuff and I was very happy I got to meet those guys. Being able to say hi to Tim Schafer was awesome, because I have so much respect for him. So we got to play it and their designers were familiar with Starhawk, so we had a really great discussion between our creative director and their creative director.

But, most of the time I just sat at our developer booth and was dragged to press interviews. Kind of a bummer.
Why did you wait until May to announce the game, since rumors have been around since 2009?
I think a lot of games show too early, so they’ll contract a CG house and get the players amped up with some gorgeous video that is indicative of the tone but not indicative of the game.
I had actually promised our fans that the first time we unveil it, it will be with real footage — that was a year and a half ago. Working with the Santa Monica team [Starhawk‘s publisher], we wanted to unveil it when we felt it was good. We actually thought we wanted to show it at last year’s E3, but we weren’t happy with it at LightBox. As a testament to the critical eye of the Santa Monica guys, they were like, “You know what? Let’s wait.” We didn’t have to show, so we waited.
I’m glad we did because at our unveil and at E3, we got a lot of comments from people saying, “Just release this as a demo, right now.” We had the game running 72 hours at E3, and I think there were only three crashes — and it’s way pre-alpha.

You recently set up a Facebook page for feedback and suggestions. Have any fan comments been worked into Starhawk?

Some, yeah. There have been — I can’t really talk about it — but there are a couple things that really influenced us.
A lot of it’s about clarification on some stuff. The other day I got a tweet from someone saying there should be a Horde 2.0-type mode where you can build stuff and play cooperatively, and we totally have that mode. You and three buddies play Rifters and defend a Rift plane, and the server just sends wave after wave of enemy troops, tanks, jeeps and aircraft. In that mode, you all share an economy so you build up your plane and defend it, kind of like a strategy game.
Warhawk was such a well-balanced game. With the new “Build and Battle” system in Starhawk, how are you able to preserve the balance between vehicles, aircraft and troops?
After a playtest we pull everyone together and we bitch about the game. We make a few tweaks and we play the game again the next day. We do that every single day. We’ll do our best to make sure everything is well-balanced before release, but as we saw with Warhawk, we’ll make a mistake — “oh shit that’s bad” — now that we have 30,000 people playing at the same time, we’ll see how bad it is. We never would have seen that during QA.
This guy on the forums that is complaining is totally right, but I know in order for me to fix it, it’s a minimum of $32,000 dollars worth of cost to submit a patch and all that stuff. What we really want to do is do what Naughty Dog brilliantly did with Uncharted 2, where they have a patch system and a hotfix system that could by-pass Sony and react quickly.
So we follow their lead. Next time when someone complains about something in the game, I don’t have to say, “Yes, it will be fixed in three months.” Now, I can say, “Yes, it will be fixed tomorrow. All you have to do is reboot your machine.” 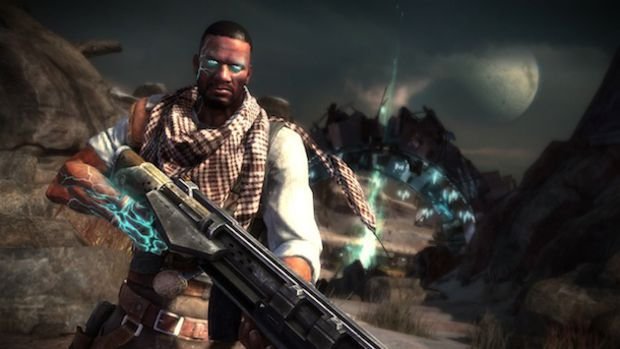 At E3, I talked to Naughty Dog about how it created a offline LAN-mode as a work around during the weeks without PSN. Now it’s a feature in Uncharted 3. Did you guys have a similar experience?

Warhawk was at the forefront of PSN, when Sony didn’t really have things figured out. Now that the service has matured, are there elements that you can now include in Starhawk?
PSN and Crossbar updates have given us new stuff, but really the new things we are doing in Starhawk are pushing the boundaries of the service. We are still having discussions with Sony — one of the things we want to do is have the game always online, whether in single-player or multiplayer.

In Call of Duty, you choose multiplayer or single-player and it starts up a different game. If you go multiplayer, you have to exit all the way back out. That always seemed weird to me, so what we ended up doing is taking all the functionality associated with friends list and wrapped it up in number of apps in our Uplink, which is our pause menu. You bring up a menu in the middle of a single-player game and you can see what your friends are doing and even browse the server list.
It pauses the mission, of course. You can press a button and go right into a multiplayer game. That sort of “always online” thing is something we are still hammering out with Sony, but we are really excited about it.

I read you guys cut single-player out of Warhawk, because you felt it wasn’t up to snuff. How did that inform the way you approached a solo campaign in Starhawk?

It informed us a lot. In Warhawk we simply weren’t happy with our single-player game. Truth be told, we really didn’t have the experience we needed to do a single-player game for Warhawk. If you look at the sort of games we did at Incognito — Twisted Metal and War of the Monsters — the single-player was largely multi-player with bots. Maybe you’d see a movie after a boss battle. We wanted to do something different for Warhawk but we were failing at it and it just didn’t come together. It was kind of a gamble to cut it all, admit it and release it as a download.

For Starhawk, we built a big design team. We have a legitimate scripting language, tool pack for building machines, a separate A.I. team and we get the incredible benefit of having the God of War team critique our shit. They know how to make a triple-A, cinematic experience. Sure, Starhawk is a different game but they can help us gauge where we are going.
Why did you move to Austin?

We always had staffing troubles in Utah. It’s always been my belief that when the content matches the culture it works really well. We are a rambunctious group. We like our beer, we like our music. We wanted to build a community that we couldn’t build in Utah.
So we looked all over the place and Sony offered us office space in San Francisco and San Diego. But, Austin ended up winning out just because it has a great vibe. I remember the first time I came down here and scouted it, it was at night and I just walked around. I didn’t know what the hell I was doing. I just went into different bars — I could hear the music and I could hear the people. It was awesome. I was like, “This is going to happen.” 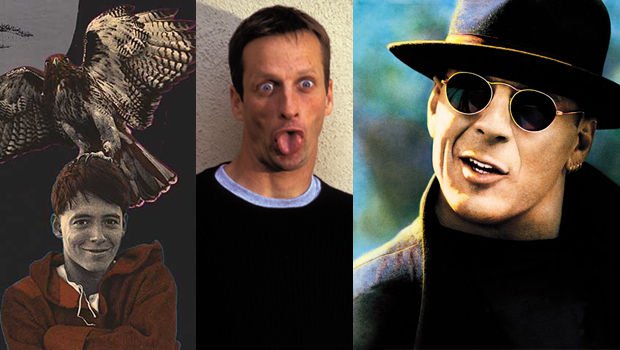 It’s five years from now. Starhawk has already come out. You’ve had your expansion packs and your game of the year edition. Sony want another game in the “Hawk” series but Sony only wants you to make a game associated with one of three licences. It has to be Tony Hawk, Ladyhawke or Hudson Hawk. Which of those three do you go with and why?

That’s a damn good question. It’s tricky. I think if you could comeback with a really good Tony Hawk game and do it right, that’d be a good product for a publisher. I like Ladyhawke. I think they can re-film Ladyhawke and it’d do good at the box office. I think the bigger question is: Who will be the hero of the Ladyhawke game? Would it be Andre the Giant, young Fred Savage in the bed or would it be Columbo. I don’t remember his name. He’s the dad telling the story.
Wait, you just described Princess Bride. That’s not part of the deal!

Oh my god, you’re right. That’s Princess Bride! I just totally botched that. I’d probably do Ladyhawke because I like the idea of doing a Zelda-style game where you have missions during a certain time of day and a certain set you have to execute at night. And there are some missions you need to transform into the hawk and finish the rest of the mission, then wait for the sun to come up to transform back.
The first thing that came up when I googled Starhawk is pagan theorist Miriam Simos. Will she be an exclusive downloadable character?

No, we probably won’t do a pagan crossover. You unlocked PAGAN RITUALIST! Maybe, robots and paganism would be cool.  Maybe.

You ever played Starhawk, the 1977 arcade game?

Yes. Early on when we talked to Sony about it, we all wanted to call it Starhawk. Sony lawyers took care of the rest, although I’m not sure who owns the rights in Japan.

Was Call of Starhawk ever in debate?