Red Faction: Guerrilla is one hell of a game. When the entire gameplay experience is based around destroying every last thing in your way, it had better be one destructive mess. That’s fantastic for singleplayer, as crushing futuristic soldiers under a building is oodles of fun. However, when said soldiers are controlled by your buddies/friendly douchebags in a multiplayer round of Anarchy, that destruction becomes a positively glorious experience.

Of course, who can forget a little thing called the ostrich hammer. That thing is epic. Every game needs more ostrich, you know what I’m saying? Anyway, hit the jump for my interview.

Destructoid: How long has this game been in development?

Rick White: We had a small team starting about five years ago, about 4 guys, as we worked on the tech, and seeing the tech and Saint’s Row 1 was coming along, and my team, The Punisher team came off and transitioned over to that. So about four and a half years.

So this is a big multiplayer event for you guys, can you describe for our audience how big is this multiplayer component in this game?

For us, the team, it was big from the beginning. We had a group of guys that were dedicated from day one versus if you think in the past projects worked on it’s usually thrown together at the last minute. ‘Oh, we want multiplayer.’ ‘Ok, let’s throw it together.’ We dedicated four or five guys from the start to make it its really fun aspect with destruction. That’s why you see the backpack system, stuff like that, only for multiplayer. 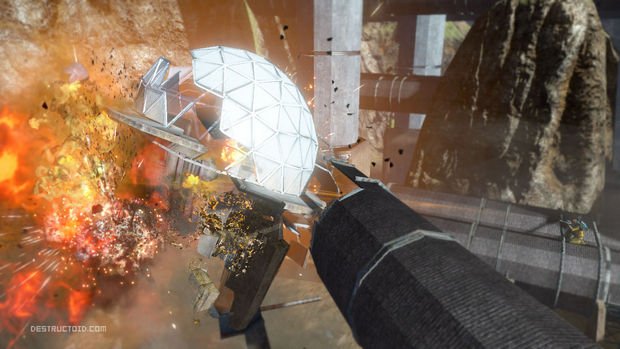 Can you describe some of the backpacks and weapons, and that sort of fun stuff?

We took pretty much all of the weapons from the single player game; we added a couple additional ones. So you have the nano rifle, the Gauss rifle, rocket launcher, of course, and the thermo. Then you also have the, what we call, the Reconstructor, which allows you to repair buildings, so as it gets destroyed, you can repair them, which is pretty useful in like Siege mode, where you have a team that’s trying to penetrate through an area and destroy key buildings, and of course you’re trying to stop them, so you’re repairing the walls.

I had this one case where my group penetrated one wall and we were working on a second wall when these guys came behind us, repaired the wall behind us, then trapped us in this little kill zone and just wasted us. The dynamics change because of that. The backpacks are kind of like our power-ups. So the Rhino, which allows you to charge forward and creates this sphere around you that pretty much knocks anything down and destroys anything. Concussion does a blast around you, a 360 blast. Then we have our Firepower, which increases the firepower, and makes it more lethal, and also take your sledgehammer and makes it more explosive. Fleetfoot, which is a good combination with the sledgehammer, if you like sledging people. So yeah, we kinda have a little bit of everything for you. It’s all built around destruction, how to amplify the destruction.

You mentioned there’s going to be 21 multiplayer maps, how many weapons and backpacks are there? 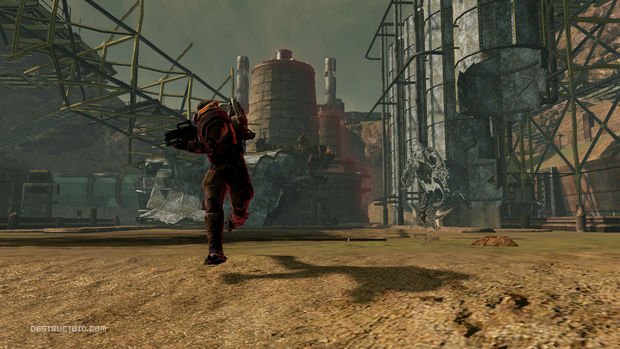 You guys have gotten quite a bit of, not notoriety, but people are pretty excited about this ostrich hammer. You’re probably sick of talking about it, but can you describe that whole process?

Yeah, it’s pretty cool. I think early on we got spoofed on the whole ostrich thing on some videos a long time ago. Some people mocked it up, and we thought it was kinda cool, so all of a sudden we have an ostrich in the game. It was kinda more a guy screwing around in the background kinda thing. Over time we’re like ‘oh, let’s build that into an achievement.’ The next thing you know I found myself playing a game where I was getting killed by this ostrich. I didn’t even know about it. I didn’t even know it was in the game. I’m the freakin’ producer, how did I not know this? I’m getting killed by an ostrich. It sucked.

Well, it is the highest. We have a lot of experience stuff, as far as skill-based, weapon-based. You can unlock other models, other sledgehammers, different looks for sledgehammers, explosive ones, and then obviously the ostrich.

Is there any chance for DLC in the future?

Oh yeah. We’ve already got a team dedicated to that. Pretty much several months prior to us submitting, we started working on DLC. So it’s really trying to listen to what the press is saying and listen to what the players are saying when it’s out there so we can build DLC content over what is resonating with players. What is it they want to see? What aspect do they like a lot? We’ll build DLC related to that. 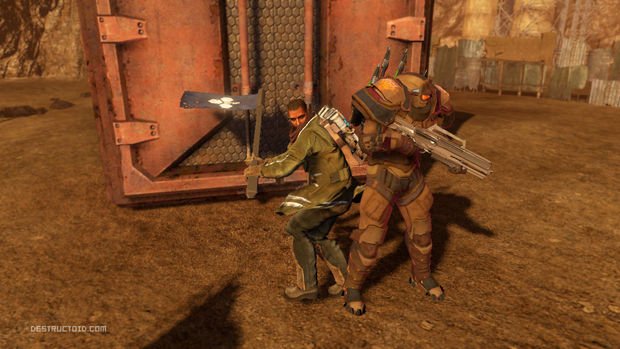 Finally, can you describe the destruction element. I know it’s really become the focal point, the sort of special aspect of the game. It’s really more than a gimmick, it’s really really integral. Could you describe that, how the technology got developed?

Well for us, the destruction system from day one was how to we make this meaningful. So what we want to do is have a destruction that was part of the gameplay, in fact, it was a weapon. So once we got the technology, the physics-based technology where weight is factored, in the size of the material, the type of material, how fast-it’s-going-equates-to-how-much-damage sort of thing. For us, it’s ‘ok, we’ve got this cool system. How do we build a cool game around it?’ We started out in first-person, and the frustration factor in getting hit, cause behind you buildings started collapsing and you didn’t see it. We switched back to third-person and then we started saying ‘what type of game, what’s the glue that really brings the game together?’

That’s where the guerrilla aspect came into it. It’s about hit-and-run. It’s about you using the destruction as a weapon to overcome this more conventional force. You’ve got the miner aspect, and mining equipment that’s been modified into weapons. So for us, the destruction had to be a part of the game, it had to be used as a weapon. It’s not a gimmick, it’s not just eye-candy, it’s not a spokesmodel, it had meaningful impact in your game.

Can we see the destruction engine used in other games?

That’s the goal. If I had my way, I’d be moving into other genres. I’d be like ‘what can we do?’ Even future consoles, can the consoles get even more powerful that I can have something with the density of Saint’s Row with our level of destruction. I’d love to see a World War II game, or a battle in Stalingrad where the whole city is slowly collapsing as the war goes back and forth between the Germans and the Russians. We can go anywhere with it. It’s a matter of focus and what do we want to do with the studio.

I love it, I’m excited it’s coming. I think we’ve really raised the bar to action-shooters. That is, with this destruction, when you play a game without it, you’re gonna be like ‘gahh, it kinda sucks that my tank keeps running into this wall and it isn’t doing anything.’