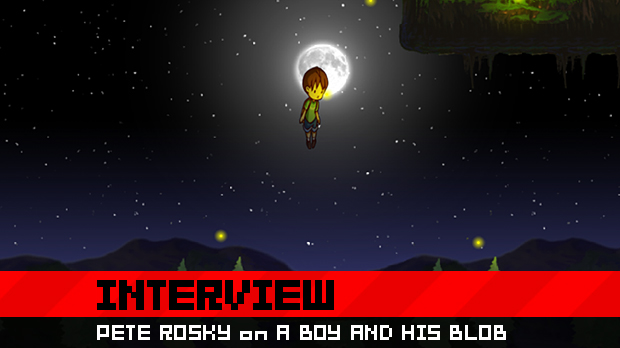 On Wednesday, I headed into Manhattan to take a look at a preview build of WayForward’s upcoming reboot of the NES puzzle platformer A Boy and His Blob. It’s a game whose distinctive art style has garnered it a lot of attention, but many gamers wondered whether it would actually be fun to play (something that you couldn’t always say about the NES original).

I spoke with Pete Rosky, Assistant Product Manager at Majesco (the company that’s publishing A Boy and His Blob), about the game as well as some promotional considerations. Hit the jump for the interview, and check back on Monday for my full preview of A Boy and His Blob. (For more Blob interview goodness, hit up Colette’s talk with WayForward’s Sean Velasco, the game director.) 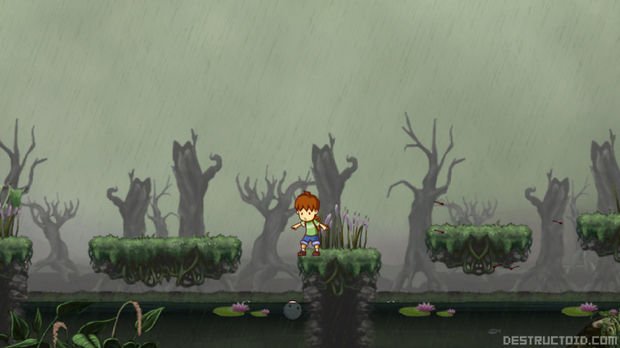 If you could pick any classic game series to reboot with a similar art style, which one would you choose?

I would love to see ToeJam & Earl come back, actually. I think that’s my answer. I mean, it was pretty funky as it was, but just imagine that now. You know, some new music — some licensed stuff.

Was WayForward comfortable with the distinctive look of the game from the start, or did the success of games like Braid let them know that that was a good direction to go in?

This was all them. In fact, I think they started working on this before Braid released. So I don’t know if there was inspiration or not later, but this was the pitch — at Majesco, we had nothing to do with the original, actual concept — we own the IP, [and] WayForward was just digging it. They really wanted to do something, and they pitched us this game with this art style right off the bat. Original concepts were all beautiful, hand-drawn — the boy looked the same … like, he didn’t go through any weird modifications — they’re really into stuff like Totoro and The Iron Giant. Sean [Velasco], the director, is very into that, kind of, anime-but-not-wacky-anime; he’s into the really beautiful stuff. So this was always their concept. 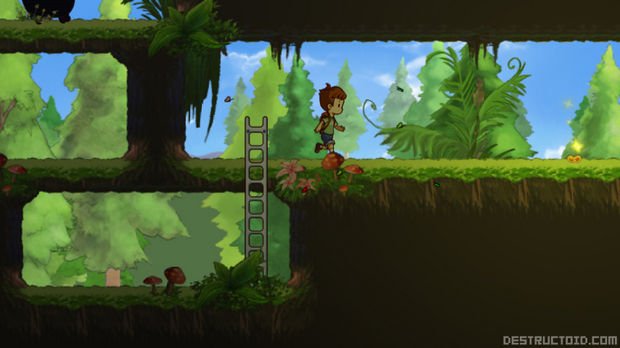 The original game was very well loved, but it was also very frustrating (for example, if you ran out of jelly beans, you were screwed). How has this game been designed differently?

That was one of the big things right off the bat — that this game was not going to be frustrating. It’s going to be hard, it’s going to be challenging; it’s not a breeze. But you don’t run out of jelly beans; there’s no counter. You have unlimited jelly beans — you just have to know when to use them. There are checkpoints everywhere. Saving is happening behind the scenes; you don’t have to worry about going to a save spot and all this other crap.

It got easier as far as navigating, but there are so many more enemies and so many more obstacles now that it kind of balanced out. We took out the frustration and added difficulty.

As a matter of inventory, do you gather more jelly beans as the game goes on? Like, once you get one, will it always be available to you?

It varies per level, but there are a couple that you’re going to notice are more standard than others. There’s a balloon, which is really essential, because if your blob gets trapped somewhere and he can’t come back to you, you can throw the balloon from a high point or throw [up] to him at a high point. It’s kind of like in the original, where there was a ketchup [bean], where you would throw it and the blob would just show up. Like, that was their way of “fixing it.” 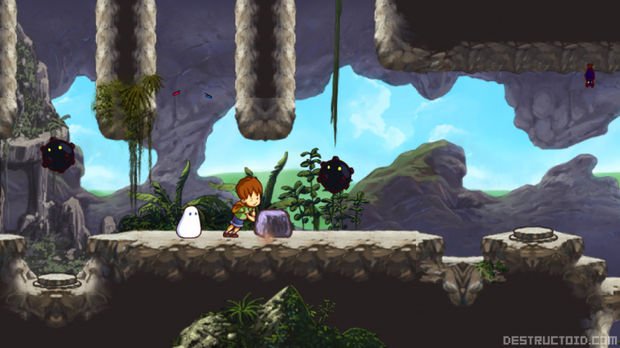 Now, we have it to where you actually have to use the trajectory (hold the B button), [and] throw that bean; he’ll catch that bean, and then he’ll come up as a balloon head. So that’s one of the major ones. The trampoline is in a lot of levels; the ladder and the hole are in a lot of levels. Those are kind of your core that you start with in the game, but later, it varies a lot.

But it’s not a progression where it’s like, you start with these and then you gain these as you go along, and you’ll always have them?

It’s always purposeful. You’ll never have a bean that you just aren’t going to use in a level. There’s a part towards the end of the game, like one of the last areas — it’s called the Citadel. It’s where the Emperor’s keeping all the blobs; it’s one of the last big areas. This is when [enemies] start really attacking you. The enemies get tougher and tougher. And there are spitters — they actually spit this black ooze at you, and it kills you instantly.

So we made it that the blob turns into a shield. This only appears in the Citadel, because it would be worthless in the Forest. So it’s one of those things where you don’t necessarily earn it, but you get to a certain point in the game where you’re going to need it, and it’s going to pop up. 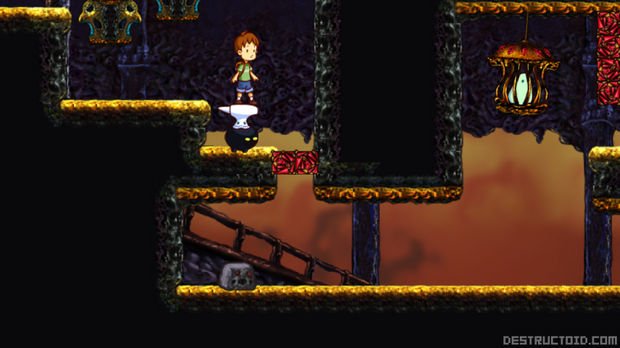 When will you announce a Jelly Belly pre-order bonus?

It was thought of, [but] licensing just was turning into more of a headache than it was worth. And at the end of the day, it would’ve felt like product placement. And we really didn’t want to put that image on the game; we think the game speaks for itself. And I don’t really think [such a promotion] would’ve sold any [extra] copies; it wouldn’t have really done anything for the business. So at the end of the day, we didn’t want to sell out.

A lot of people, especially at Destructoid, have been wondering about this — are we going to see any figures/toys? I mean, I would love a blob plushie…

We would love to do something, but right now, there’s nothing official to announce.

So when is the game launching?

I’m looking forward to it. Thanks for your time, Pete!