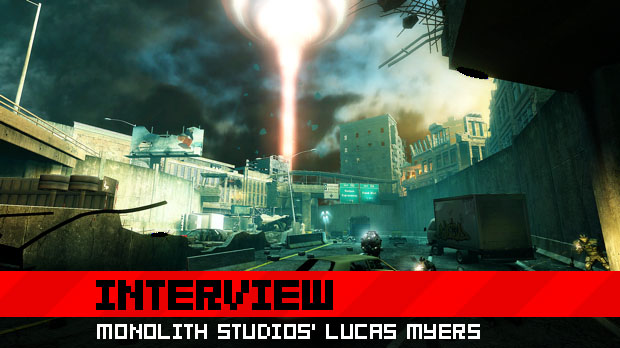 Monolith Studios surprised with the announcement of F.E.A.R. 2: Reborn, a downloadable single-player expansion. Coinciding with the events of the game, the additional four-level campaign will give players control of Replica Soldier Foxtrot 813 after the disastrous nuclear blast. Monolith isn’t keen on giving details of 813’s motivations, but we have learned he’s something of a rogue. Something is driving him to rebel against Replica Command.

Oh, the mystery. We recently had the opportunity to speak with F.E.A.R. 2 associate producer Lucas Myers about Reborn. Our goal, of course, was to find out exactly what Foxtrot 813 was all about and shed some light on the new locations, enemies, and overall action in the September-bound content. Myers doesn’t disappoint.

Venture below the fold for his answers to our questions (even the ridiculous ones). 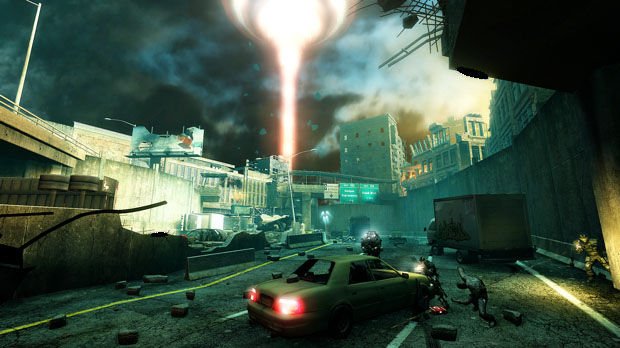 DESTRUCTOID:
Walk me through the process. How long has Monolith planned to do campaign DLC for F.E.A.R. 2: Project Origin? When did the idea behind the DLC hit the team behind the game? How many man-hours did it take to finish? How does crafting SP downloadable content differ from downloadable MP content?

Lucas Myers
Isn’t there some kind of rule about asking more than one question at once?

Monolith planned to do single-player DLC for F.E.A.R. 2 fairly early on. However, we didn’t know at that time exactly what shape it would take. Once F.E.A.R. 2 was complete and out in the wild, we finally got the chance to focus on it.

It was then that we got the DLC team together and started planning out the building blocks: Who will the player control? What part of the story do we want to tell? Which environments can we push to the next level along the way?  From planning to completion, it took several months of a dedicated team to develop all of the new content.

Crafting SP DLC is completely different from MP. It takes a lot more resources, time, and iteration. While additional MP maps are nothing to sneeze at, there are a lot more moving parts when making an entirely new campaign. This is part of the reason why we were able to deliver our multiplayer DLC first and why our single-player offering is coming later.

What kind of environments can players expect to explore in this DLC?

We wanted to create environments that our fans would really appreciate. After looking at all of the feedback from F.E.A.R. 2, we knew we wanted to provide spaces that offered a more open and vertical feel. This means the player will get to experience some of our most successful environments, like the blasted city of Auburn, from new and fun perspectives. We also made sure to give players more of things that were only teased in F.E.A.R. 2, such as the alternate psychic ‘nightmare’ world that Alma dragged you into. I can’t give away all of the spaces you will get to visit, but we put a lot of effort into making sure the player will get to transition into plenty of new areas as they move the story forward.

How does the DLC tie into Project Origin’s narrative?

You get to play as a completely new character, Replica Soldier Foxtrot 813, in this DLC campaign. As such, the player will experience elements of the overall story from F.E.A.R. 2 from a different point of view. The timeline of events plays concurrently to the original game: the apocalyptic blast has already been let loose at the start of the DLC. Replica forces have been awakened and are in full-blown war mode. The player will be thrust into the action immediately. You will literally be gibing enemies seconds after touchdown. 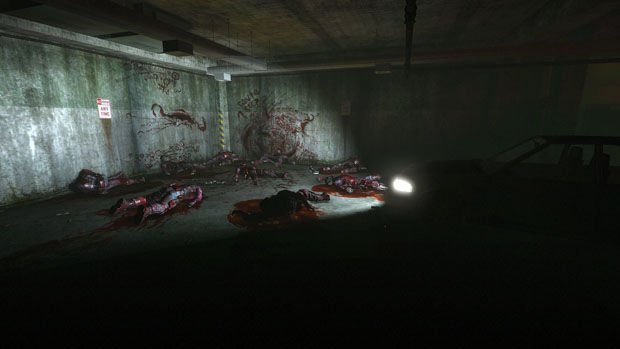 Are there any specific mechanics you’re looking to emphasize or introduce with it?

More than anything, we wanted to emphasize our visceral, intense combat. We designed our environments to highlight and maximize the fun in any given fight.  Whether it’s mixing up enemy types, allowing multiple avenues of attack, or giving the player more options to decide how they want to defeat their enemies … The most important thing we had to ask ourselves and make sure we succeeded with was, ‘Is it awesome?’

To give one example, we’ve made an environment where the player will essentially be under siege. You will get to choose how you want to progress through this fight.  Will you pick up the sniper rifle and surgically remove your targets to make an escape?  Or will you get on the cannon turret and try to blast them out by brute force? Each will have their advantages and disadvantages… But both are pretty damn satisfying.

Will there be more action? More mech stuff? How about stealth?

Yes, yes, and yes.  One of elements that we’re most proud of in F.E.A.R. is our over-the-top, kinetic combat scenarios.  With each iteration, we strive to push the limit further — and we think we’ve succeeded yet again in F.E.A.R. 2: Reborn. I don’t want to give it away, but one of our favorite new encounters has been consistently praised in our internal playtests as one of the most exciting and novel combat experiences in all of F.E.A.R.

As for the mech, or EPA (Elite Power Armor) as we lovingly call it … We waste no time getting the player back into wreaking total havoc with those machine gun arms and shoulder-mounted rockets. The EPA is, after all, a weapon designed for the Replica forces. Your character, Foxtrot 813, is actually a trained EPA pilot and is called in as an emergency reinforcement. Orbital drop, anyone?

Talking about stealth — let’s just say when Foxtrot 813 starts disobeying orders from Replica Command, his squad isn’t very appreciative. I won’t spoil it any more than that.

How long will it take players to complete?

We designed each of the four new levels to take about the same play-time as our levels in the retail game. However, we have made a guiding design decision to make this campaign more challenging than the original. And this doesn’t just mean enemies deal more damage.  In order to give players a fresh feel, we tried to craft much more interesting and fun combat experiences, along with combining enemy types that were normally separated before. Given all that, our internal playtests have put the overall campaign at over two hours. Although, players who choose to play on harder difficulty modes will likely find themselves with an increased average time to completion. 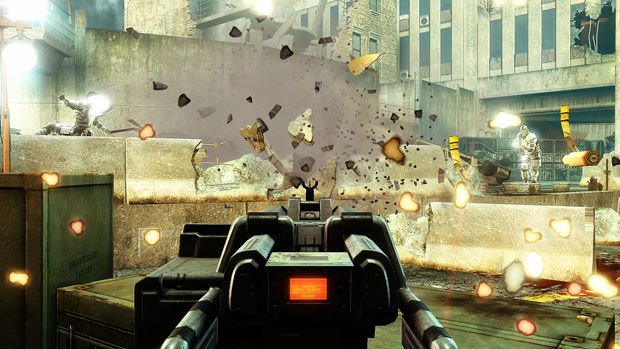 Will we see Snake Fist do his thing during the end credits?

I have to admit, our alternate ‘Snake Fist’ credits video is ridiculously amazing. It’s okay for me to say that because I had nothing to do with it.  For any of your readers who haven’t checked it out yet, I highly recommend going to our community site and giving it a watch.  As for your question, the answer is no … However! That isn’t to say there won’t be a little bit of Snake Fist homage hiding in one of our levels…

Do you think you’re delivering what fans want with this DLC?

We certainly hope so! We listened very closely to our fans’ praises and frustration from F.E.A.R. 2. We’ve varied our environments even more, opened them up and added vertical combat elements.  We’re exploring and revealing more of the story — and we’re doing it from a point of view that our players have often been curious about: that of a Replica soldier.  And of course, we have brought back a familiar and favorite face from the original F.E.A.R. What F.E.A.R. fan doesn’t want to learn more about their favorite characters?

Last two questions: If the DLC were a color, what color would it be? Also, will there be any wolves in the content?

If ‘FEAR 2: Reborn’ was a color … It wouldn’t easily fit into the normal spectrum of light that we humans can see.  We would have to classify a new bandwidth, and it would probably be named ‘ACTION’. But of course, this brings a whole slew of problems in the English language whereby people use the word ‘action’ and are now confused.  “Wait, do you mean the color?”  We here at Monolith Studios do appreciate the language enough not to cause this kind of havoc…  So let’s just not have DLC be a color.

As for wolves … They didn’t review well in internal playtests, so we cut them.  Who told you about that??

Psst, Lucas, I have mind powers. Also, thanks for taking the time to answer my questions.