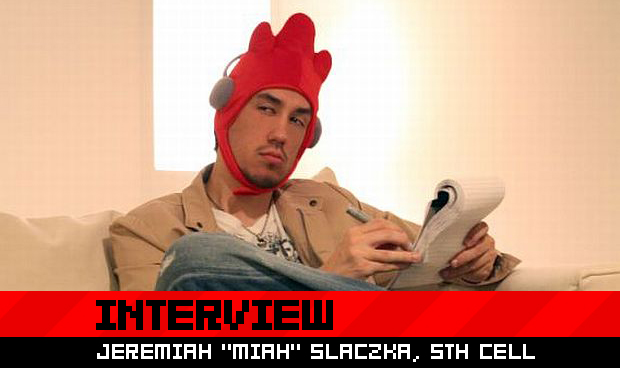 It’s a game that came out of nowhere. A small studio, some interesting but far from perfect DS games, and a new title with an outlandish claim that every item in the world would be inside — 5TH Cell didn’t just have a lot to prove; they had to follow up with their crazy goals.

Then E3 happened. With people finally getting some hands-on time, Scribblenauts went from mere novelty title to a must-have. Somewhere between summoning the kraken and making keyboard cat, things just clicked. Sure, the game isn’t even out for another month, but anticipation is burning hot. Even if the game doesn’t quite come together, the technology behind it is staggering. Surely the team behind Scribblenauts must be an interesting group of people?

Lucky for me, I had a chance to ask a few questions to Miah Slaczka, the Creative Director behind Scribblenauts and Co-Founder of 5TH Cell. He had a few responses to how this game was born, and some special challenges for making Scribblenauts. He even hints to the future of 5TH Cell, and what we can expect. He even answered some Twitter questions from people just like you! Hit the jump for our discussion.

First of all: how on Earth does a team go about creating a game with everything in it? What went into developing the engine, and what is the process of creating an object and applying the attribute and characteristics? How long does it take to create an item?

Lots of pre-production to figure how to do it. Marius, our Tech Director, really had a clear vision of what the tech should be behind it and created Objectnaut, our in-house tool to make the game’s objects work the way they should. We order art for the object, animate it if need be, convert it to get into the DS, plop it in Objectnaut under a category and subcategory, which already gives it a bunch of properties; from there we just tweak it to what we need. To create an item it doesn’t take long at all, few hours. To refine and polish it takes a few more. The engine handles a lot of the hard work for us; we designed it that way. Otherwise, there’s no way we could have finished this game in a year.

What has development been like compared to Drawn to Life and Lock’s Quest? Any particular problems or moments of glory? Where did the inspiration for this game come from, and what do you hope players will gain from playing Scribblenauts?

Drawn to Life was our first DS game, so we’ve learned a lot since then. Lock’s Quest was a refinement of Drawn to Life on how to make DS games, while Scribblenauts was another huge, wild undertaking stepping onto completely new ground. Moments of glory? E3, of course, was amazing for us, also when everything came together towards the end and the game went from being lots of empty systems to “wow, all these objects work!” was great. As far as inspiration, I looked at what does well on the DS and wanted to make a game that catered to everyone, I really love to push the boundaries of what can be done in a title and Marius has always been great at realizing those concepts. Scribblenauts definitely fits that bill. I hope players can just have a lot of fun and enjoy themselves. 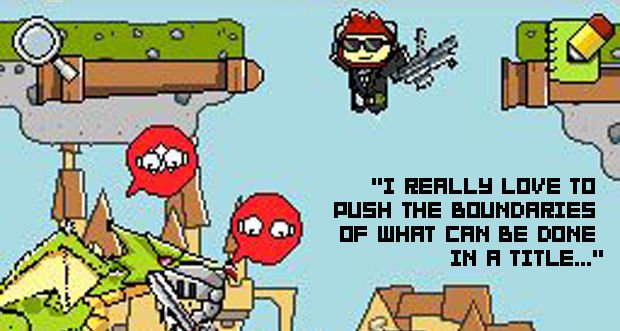 I’d like to get your commentary on creativity and emergent gameplay in videogames (e.g., LittleBigPlanet, Kodu Game Lab, Scribblenauts). It seems that a major trend has been to give control to the players, and you guys seem to be on the forefront of such a trend. Care to comment and give your view point?

I find emergent gameplay interesting, obviously, but to be honest, I just make what I like to make. I never thought about other emergent games when coming up with Scribblenauts, or that the game would be emergent at all; it just organically grew into what you see now. If our game follows a trend, that’s fine, but I’m not really interested in following or being part of trends. Our motto is to make our own waves. People want to play 5TH Cell games because they can’t get our experience anywhere else.

We all know that the game aims to include everything, but just as interesting is what has be left out of the game. Sure, obvious sexual and mature content is left out, but figures like God and Einstein have been left in. Will we see Jesus or Mohammad, Hitler or Stalin, a chainsaw or bloody weapons? Can you attack babies? The emergent gameplay of Scribblenauts means some people are going to try and do some twisted things: How do you fight this? Or do you fight it?

We’re not interested in creating controversy with our games. I’ll leave the shock value games to other developers. So controversial characters are out, and for a game like this, blood and gore is out too (although chainsaws and all other kinds of weapons are in, because it’s done with comical violence like cartoons). Attacking babies is okay as well due to the cartoonish look. Beyond that though, have at it. We have no idea what people are going to do. That’s what the game is all about. So why should we fight it? 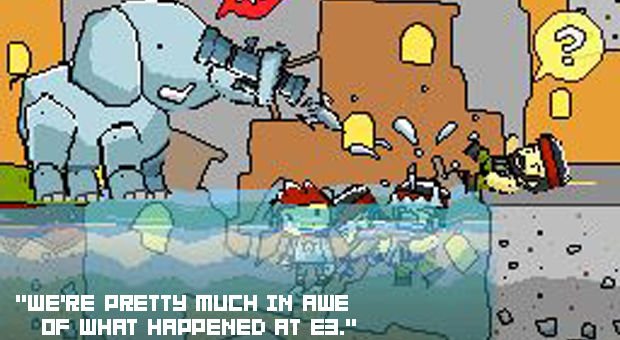 I’d like to get your commentary on your experience this year at E3. No need to brag, but Scribblenauts was lauded across the board, with many websites and publications giving the game “best in show.” What’s your response to that, especially considering this is a DS game, and one that has been rather low-profile? Also, why strictly the DS? What’s in store for 5TH Cell for the future?

We’re pretty much in awe of what happened at E3. For some amazing reason, people have just latched on to our title and just want to share it with everyone else. It’s really incredible — I’ve never seen anything like it. We’ve been doing DS games for a while because the tech makes sense, our team knows the DS well, and from a business side it’s done well for us, but 5TH Cell will be moving into our first console titles next year and beyond, still making original games you can’t get from anyone else.

@LitmantheHitman: Can you summon a clinical neuropsychologist? And if so, is it attracted to brains?

Probably. There are so many items in the game I really don’t know. *laughs*

@sawmillangstrom: Does the game award bonuses for creative solutions? If so how does the game define creative? Or try to get more info about merits?

Yes, the game does indeed award bonuses for creative solutions. You can get more Ollars and more unique merits by coming up with unique solutions. But how it all works is a mystery!

@BlisterBrown: Ask him for some more info on how the level editor is going to work.

The level editor allows you to edit any level you’ve beaten by using the geometry of the level and then adding your own objects to be obstacles. If those objects are AI (like a bear or a cop) you can override their default behavior and have them interact in new, weird ways. You can also share these levels online with friends via friend codes or locally.