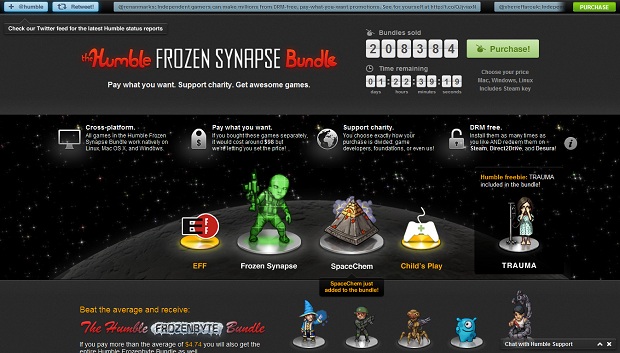 It surprised me when I realized the first Humble Indie Bundle was only released in May 2010, just under 18 months ago; it seemed to be part of indie gaming’s rapid ascent in popularity over the last few years. The first Bundle was a collection of some of the best indie titles around — World of Goo, Penumbra: Overture, Aquaria, Gish, and Lugaru (eventually Samorost 2 was added as well) — and gamers were encouraged to pay what they wanted, with some of the proceeds going to the Electronic Frontier Foundation and Child’s Play, in addition to the developers themselves.

It was a smash hit and gamers spent over $1million on the bundle. Another Humble Indie Bundle followed in December 2010, then in April and July of this year too with each being well received by the gaming community. Each Humble Indie Bundle revealed some interesting facts about what platforms the games were purchased on, showing that the oft-neglected Mac and Linux gamers made up roughly 25% of all purchases

As I type this, there’s just over 24 hours until the latest Humble Indie Bundle wraps up. This time, gamers have a chance to get their hands on games as varied as the science-based puzzler SpaceChem, the art-inspired TRAUMA, and the tactical top-down shooter Frozen Synapse. I was lucky enough to speak to one of the founders of the Humble Indie Bundle, Jeff Rosen of Wolfire Games, about how the idea for the bundle was conceived and what the plans are for the future.

Destructoid: So where did the idea to create the Humble Bundle come from?

Jeff Rosen: We saw that simple indie Steam sales were constantly topping Reddit as stories of the day, and we were guilty of buying more than a few of them. This gave us the motivation to make a simple Preorder Pack with our friends at Unknown Worlds, bundling Natural Selection 2 with Wolfire’s upcoming game Overgrowth. That did very well for both of us [see our post mortem here] so we were brainstorming ways to top that.

We wanted to do another promotion, and we kept thinking of ways on how to make it better. We kept layering on new “features,” until we had something that we thought was pretty much the most humble, consumer-friendly promotion possible: a “Humble Bundle,” if you will.

The goal was to really make something that people wanted and making it easy to buy, rather than worrying about account creation, DRM, and other things that tend to get in the way.

Was it easy to get indie developers on board?

For the first Humble Bundle, it was relatively difficult since we were adamant that all games have Linux builds, which cut the possible pool of games dramatically. No one was really sure what to expect, but everyone was pretty excited to do the experiment.

What has the feedback been like from the developers who have had games in previous bundles?

It has been pretty great and many of the games have returned as a bundle in a bundle. A number of the developers have actually made more money from their time in the Humble Bundle than they have from any other source which is pretty serious.

Were you guys surprised at how much money the first Humble Bundle generated?

Yes, we had pegged around $100,000 as the “success” amount and were totally stunned when we reached that within several hours. It was actually pretty stressful, we were not accustomed to seeing money in that quantity. Sending the checks out to EFF, Child’s Play, and the developers was one of the most awesome feelings ever.

Was the plan to have more than one Humble Bundle or did the success of the first prompt the idea of doing future bundles?

The first bundle was definitely intended to be a one-off thing. We barely were able to find the manpower to get that off of the ground, let alone plan a series of bundles after it. Once we launched it and saw how amazing the reception was, we instantly realized that we had tapped into something huge. 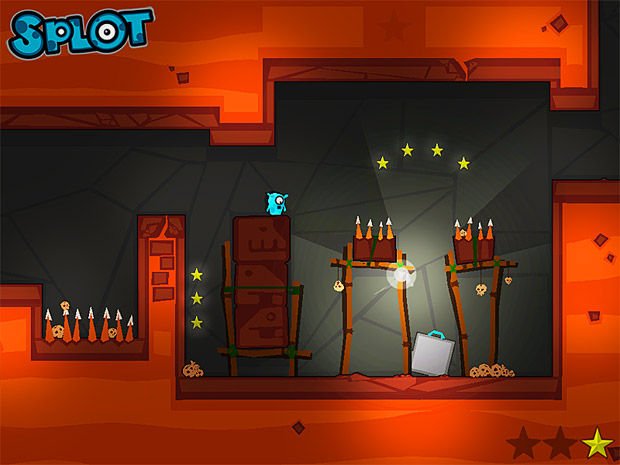 You’re only a small bit off breaking the $1 million mark for the Humble Frozen Synapse Bundle. Can gamers expect a possible surprise if that target is reached?

Hmmm, probably not. We are adding a new version of Splot, but that is not exactly tied to the $1M milestone. We are definitely working on future bundles though!

As a developer how, do you see the indie games scene on PC/Mac/Linux? There’s a lot of doom and gloom when it comes to AAA titles on PC but the indie scene seems really vibrant right now. Is that the case?

I think PC gaming is doing better than ever as far as indie games are concerned. I don’t actually have any numbers to back that up though. There are certainly a ton of success stories lately, and mega-success stories like Minecraft, but there’s also a ton of games that no one has heard of yet. I think the barrier to create a PC game has never been lower and with distribution channels like Steam and the Humble Bundle, I feel like it’s getting easier for a growing number of indie developers to earn enough to make a living.

The Humble Indie Bundle is a really inspiring thing to see happen right now; it shows that there’s a lot of gamers out there who are really interested in playing indie games on multiple systems and that gamers want to support indie devs, and organizations like Child’s Play and EFF.

I hope these keep happening for many years to come, and I’d like to thank Jeff Rosen for taking time to talk with Destructoid.