Crusader Kings II is a game I can’t quite bring myself to stop playing. Ruling a medieval nation has never been so much fun, and I’ve now rewritten history more times than I can count (so, at least ten times). Paradox has been steadily updating it with patches and DLC, like the Ruler Creator and a whole bunch of extra music, but now the company is almost ready to launch its first major piece of DLC: “Sword of Islam.”

Unsurprisingly, this expansion will allow players to control a myriad of Muslim dynasties, but it’s also adding a whole lot more. Project lead Henrik Fåhraeus took some time out of tinkering with the game to fill us in on what to expect. 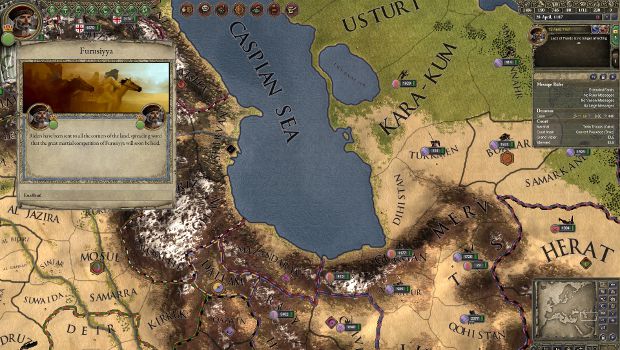 Destructoid: How different will the Muslim dynasties play? For instance, what role does polygamy have?

Henrik Fåhraeus: Polygamy is kind of expected of Muslim rulers. So if you don’t have enough wives — depending on your station — you will lose some prestige.

So it will be a little bit embarrassing if you don’t have enough wives then?

(laughs) Yeah, well, a little bit. Maybe it’s not completely realistic, but it’s a gameplay thing. Muslim rulers will be stuck with a lot of heirs or children…

Exactly. So we want this kind of dynamic where you have a large family, so you won’t have a problem producing an heir, but on the other hand, your titles will be contested when you die.

There will be quite a few civil wars then?

That should make things rather exciting.

Yeah, you know, Muslims conquer land, but they have more trouble keeping it than taking it.

Will there be any laws specific to Muslim rulers?

No, we don’t have any specific laws, although there is a succession law called the Turkish Succession Law, which is reminiscent of the old Elective Law in [Crusader Kings] where the guy with the most land succeeds. So you can influence who you want to be your heir by giving him more land than your other sons. Also, Muslims pass laws just by spending piety, they don’t have to hold a vote.

So it’s a lot quicker a little less democratic?

Yeah, exactly. You’re this despot, you don’t have to worry about pleasing your vassals in the same way. 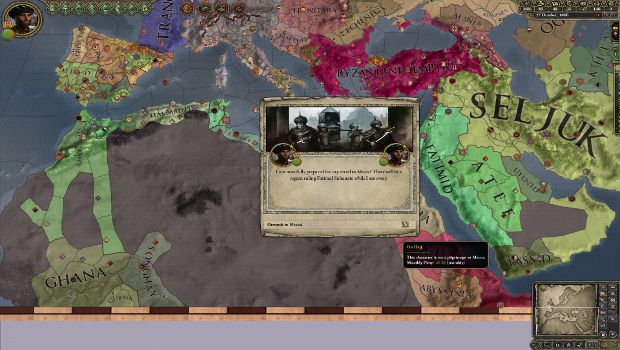 What sort of Muslim-specific events can players expect?

Oh, there’s a load of those. Firstly, we’ve replaced some of the major decisions, like holding a tournament or a feast with Muslim equivalents. So they can observe Ramadan, or go on a pilgrimage to Mecca, stuff like that. A little story plays out, almost, along the way to Mecca, a little roleplay-ish.

A little bit like when you go to a feast and insult people or get in duels in the core game?

Yeah, things like that. You might be attacked by robbers, and you get the choice of whether you want to fight back or flee.

And will that add new traits?

Yeah, and give you prestige. Of course, we’ve also added lots of regular events that just happen as you play the game, with a Muslim flavor.

Are there going to be any noticeable differences in how Muslims fight and go to war?

Yeah. As I mentioned before, they have an easier time conquering territory, so they have other rules for their casus belli, so it’s easier for them to just take stuff. For instance, they have a border conquest casus belli, which means they can just take any province on their border even if it’s from brothers of the faith, so to speak. However they do take a hit to their piety when they are fighting other members of the faith.

I take it they get some unique holy orders which they can use, like the European powers.

They get one, the Hashishin.

They’re kind of equivalent to the Knights Templar or Knights of St. John. There are all kinds of cool events for them, just murdering people. (laughs)

You’ll find a head in a basket at your doorstep. 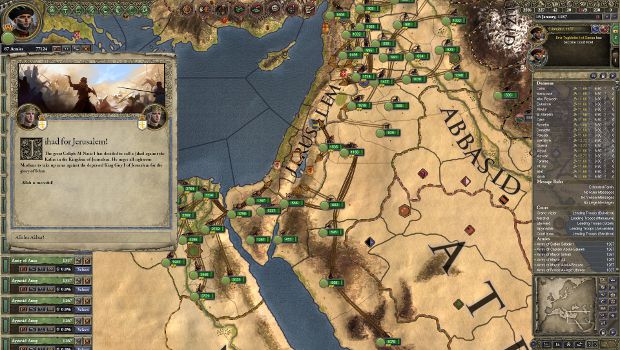 Are there going to be any Muslim start dates which you are highlighting. The core game had periods like the Norman Conquest and the One Hundred Years War, so will there be anything like that?

No, not this time around. We’ve kept the same bookmarks as the base game.

Will the Muslim leaders be able to install their own religious authority, like the way Christian leaders can set up an Anti-Pope?

No, there’s no concept of an Anti-Caliph, although it’s something we’ve tossed around a bit. Maybe at some point we’ll see something like that.

Will there be any new additions to the soundtrack? One of the things I loved about Crusader Kings II was the wonderful music.

There’s additional DLC you can buy with Muslim-specific music. It’s not included in the base “Sword of Islam” DLC, though. It’s over ten minutes of new music from Andreas Waldetoft who did the old music for Crusader Kings II.

Excellent! Now, will there be any new content for European rulers, alongside the additions for the Muslim dynasties?

Every time we release new DLC, we also release a patch which features all kinds of stuff. This time around we’ve added new provinces down in South Western Africa, representing Mali, Songhai, and Ghana. So we’ve extended the map a bit. Also, there’s all kinds of new events for Christians, too. And there’s a system for strong and weak claims, which is kind of a big deal.

Oh, so would a weaker claim be one that the Chancellor has just fabricated?

Basically, only the first and second in line to the throne get strong claims, and everyone else gets weak ones. You can only use weak claims to try and attack titles, or gain titles that are involved in a civil war or something. For example, you can use a weak claim against a female, if your ruler is male. Or you can use one when your target has a regent. So it’s harder to use them, but we’ve made it pretty clear when you can use them. A little alert icon drops down and tells you when you can use your weak claims.

It sounds like you’re making claims a lot more interesting, but also increasing the level of risk involved.

Yeah, absolutely. Also, they don’t last very long because strong claims turn into weak claims when they are inherited. So, there’s not so much spamming with lots of rulers having lots of claims. We also revised combat. We got some feedback about combat not being interesting enough and smaller armies always losing to bigger armies. So we’ve done a lot of stuff with that.

I quite liked the addition of flanks in Crusader Kings II, so will there be more formations like that or new tactics?

It’s been developed a bit further. We have something called commander traits, where if your character has a martial education, he will get one or two commander traits. They will affect the efficiency of various troop types, his flanking ability, and so on.

So choosing leaders for armies is pretty important now?

Exactly. And we’ve added combat tactics, and they’re more decisive as well. So combat is going to be less predictable, but on the other hand more tactical as well. 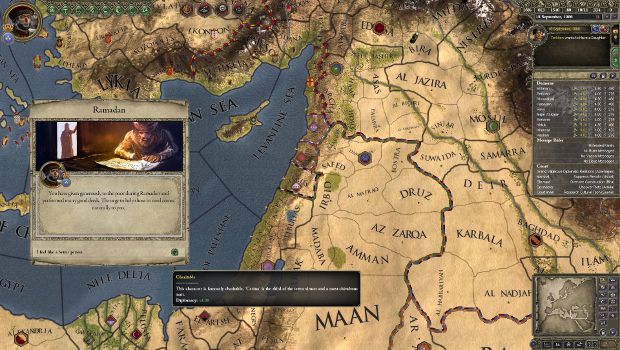 What did you find to be the most challenging aspect of the DLC to work on?

Oh, that’s a tough one! I’d say that the whole decadence system was the toughest to get the balance right.

And how does the decadence system work?

Basically, we want to represent the ebb and flow of dynasties that you can see in real history in the Muslim world. When a dynasty begins or is founded, it’s kind of pure and not decadent, but as time passes — if the members of the dynasty are just hanging around not doing anything — the whole dynasty will start getting decadent. That will give you various penalties, and eventually — if the decadence is high enough — a new and vibrant tribe will ride out of the desert and displace you.

Oh dear. So there will be problems if family members are just lingering around harems, enjoying their lives?

Yeah! Exactly. Muslim rulers need to make sure that their dynasty members have land, have jobs and get to fight in wars.

What part of the DLC are you proudest of, or are most excited to see people play?

It’s another tough one! (laughs)

It is another tough one! (laughs) I think it’s probably the decadence system again. It’s what gives the Muslim dynasties a different gameplay flow and feeling, so that’s kind of the core of the expansion.

I got a chance to have a wee peek at the beta and grabbed a random Muslim dynasty to take for a spin. But I’m still trying to decide who to take for my first full “Sword of Islam” game and when to start. Do you have any personal favorites?

I always prefer the mid-sized countries. The Hamudids of Northern Africa are nice to play. It’s a challenge, but you still have something to work with!

Have you added any new empires with the expansion? We already have the Holy Roman Empire and the Byzantine Empire, so will the Muslims have their own?

They will. We’ve added a number of new empires to both the Christian and Muslim worlds. The Muslims get the Persian Empire and the Arabian Empire. In the Christian world you get stuff like Britannia, which is basically the united British Isles, and you get Scandinavia and so on. These empires don’t exist at the start of the game, and you’ll rarely see AI creating them because the creation conditions are pretty harsh. But still, this gives players something to aim for.

So it is an extra challenge for ambitious players.

And I assume the Persian Empire will often be at odds with the Byzantine Empire?

Well, if they exist.

Finally, when will “Sword of Islam” be available.

It will be available on Tuesday, next week.

Yeah, very! I hope people enjoy it. It’s more polished than the last DLC we released, which had a rocky launch. I think you’ll enjoy it.

Thanks a lot for chatting to me about “Sword of Islam.”