Adorable and wholly original, developer DreamRift’s Monster Tale has been on our radar since it was first revealed last year.

Earlier this year, Colette Bennett got a chance to look at the title, and walked away wanting more. So we recently caught up with co-founder and creative director Peter Ong to hear more about what maybe the last great original title for the Nintendo DS.

DESTRUCTOID: So in your own words, tell me what this Monster Tale business is all about, if you could.

Sure. Monster Tale is about an apparently normal person named Ellie, who wakes up in a strange world full of unfriendly monsters. Ellie soon discovers a mysterious egg, which hatches to produce a baby monster that Ellie names “Chomp.” A strong bond quickly forms between the two as they set out on an adventure to uncover the answers to questions about how Ellie can get back home, and where Chomp comes from.

The gameplay in Monster Tale is centered on the combining of two different genres that may at first glance seem to be incompatible with each other. The two main types of gameplay each have one of the DS’ two screens dedicated to it, with the top screen being an action-platforming adventure, and the bottom screen being a pet-raising simulation.

Ellie and Chomp progress through the game world by exploring a large open world while doing combat with enemy monsters and bosses, and acquiring abilities which allow further progress when used on the environment. Ellie’s pet monster, Chomp, is able to immediately switch between the two DS screens on-the-fly during gameplay. He can help Ellie deal with challenges on the top screen, or go to the bottom screen which is his home where he eats, rests and plays in order to grow further.

There’s a constant decision that the player has to make as to which screen he or she feels Chomp is most effective in at the time. The question of how the two screens with their different types of gameplay can come together was what intrigued us most about making the game, and we hope that also remains true for the audience as they play it.

There’s a lot of experience on the team, but DreamRift is a new studio, and you guys are coming out of the gate with a new IP here. I’d imagine that would be both challenging and scary.

It was definitely challenging, and we were aware that taking other routes such as doing licensed games or ports of existing games to different platforms would be safer. Although, many of us have experience making some very successful licensed titles in the past, we felt strongly that for our first game as an independent studio, we wanted to tap into our passion for creating new universes, characters, and innovative gameplay mechanics.

When we originally pitched the concept to publishers, we noticed that many publishers perceived an original IP as being too risky for the current DS market, preferring instead to go with sequels to existing games or products based on other licenses. Due to that climate, we felt a sense of accomplishment when we reached an agreement with Majesco to publish the game.

I think that Monster Tale is one of a few, if not the only, new IP games from a western studio to have been signed in the past year on the DS.  We have the utmost respect and appreciation for Majesco’s support in working with us to bring Monster Tale to reality.

The decision to create an original game concept of our own played off of what we saw as our strengths as a team.  We have a lot of experience in creating a new IP from scratch, including Henry Hatsworth in the Puzzling Adventure, which my founding-partner, Ryan Pijai, and I worked on as Lead Designer and Lead Programmer. In fact, I have never actually worked on a sequel across a professional game design career spanning more than a decade. 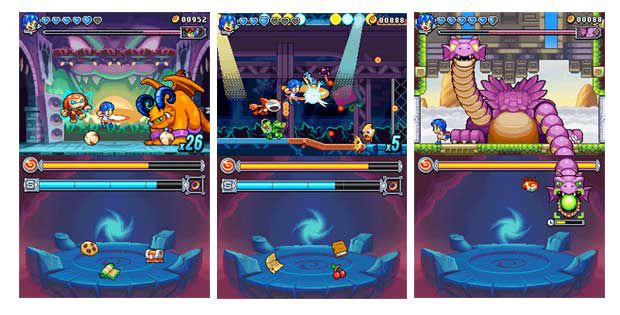 From a gameplay perspective, the idea of Monster Tale as a whole is original, but the individual parts have roots in other titles and various genres. What titles/genres specifically were you looking at/drawing inspiration from when designing Monster Tale?

Although we love and respect certain games, we don’t look to recreate them. Instead, we seek an understanding and exploration of the fundamental principles that tend to underlie our favorite games (as well as books, movies, etc.) through the process of creating something new. This means we’re constantly learning throughout, and that’s what keeps the endeavor of making a game most interesting and fresh to us.

There was critical success with Henry Hatsworth, which was also a wholly new IP and idea. Was that success surprising for you, and was that in anyway a catalyst for giving it another go with this completely fresh idea out of the gate?

Although we had hoped that the audience would be as excited by Hatsworth as we were in making it, we didn’t know for sure what would happen with the its reception.

Thankfully, it seemed to resonate very well with people, even though our team had been less than 1/3 the size of leading games in its genre. Last time I checked, no other non-Japanese original DS game ever released has a higher overall critical rating (Metacritic) than Hatsworth! The game’s success definitely increased our confidence in our ability to create a new game where our passion would translate to the audience’s experience, and it served to whet our appetites for seeing what else we could do. 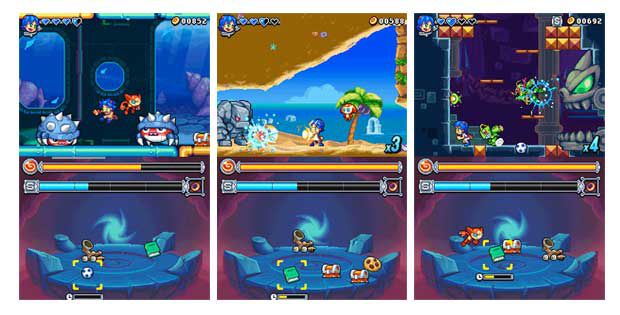 Nintendo handhelds have longevity, even as its successors hit shelves. Still, is it strange/annoying/worrying to develop a DS game with the 3DS so close to release?

We thought that there was still more ground to be explored on the DS in terms of how its particular hardware can be used to provide a different type of game experience. That, combined with our momentum from our previous experience on the DS, led us to believe that this game needed to be made.  We felt that we weren’t done with the DS yet, and also that it wasn’t done with us.  Now that we’ve scratched that itch with Monster Tale, we’re very excited about the first top-secret 3DS game we’re working on!

There are a ton of DS owners out there, and it remains to be seen how many will adopt the 3DS upon its launch.  Regardless, the 3DS remains backward compatible with DS games, and we think that the DS deserves to have honest efforts at good games even now.

Any chance of Monster Tale for PSN/XBLA/WiiWare or other retail platforms?

It’s a possibility, although I can’t give any official word at the moment.  We’re very interested in those platforms for other future projects as well.

What are thoughts on the 3DS, NGP, iPhone, and the future of portable gaming in general?

With the introduction of so many new platforms, this is a time when the portable gaming scene is very much in flux. One danger is the dilution of overall gaming experiences with oversaturation of toy-like/time-waster type “games,” which might lead to games being thought of as more disposable entertainment.

I’d like to see game-makers put their best effort forth to maintain the integrity and depth of games as meaningful experiences. It will be interesting to see how the differences between each platform’s hardware can translate to different types of game ideas that are best suited to each platform.

To that end, we’re currently working on a 3DS game we’re extremely eager to reveal, which could only be done on the 3DS.

[Monster Tale is published by Majesco and is in stores now.]