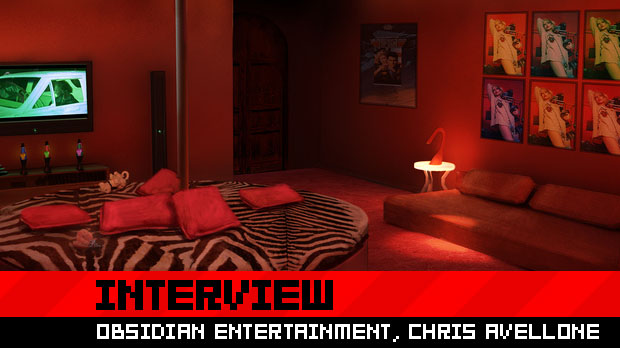 When I’d first heard of Alpha Protocol, it was just a name to me. I figured it was some generic shooting game and left it alone. Then I had to see it as part of a Sega showing at E3, along with Aliens vs. Predator and Bayonetta. No prizes for guessing which of those three games I was least excited for. However, when I finally sat down and watched the game in action, I was legitimately surprised by an ambitious, amusing and very promising RPG.

I wanted to know more, so I hammered out some questions for Alpha Protocol‘s creative director Chris Avellone. If you’re interested in this Sega-published espionage RPG, then read on for our exclusive interview. 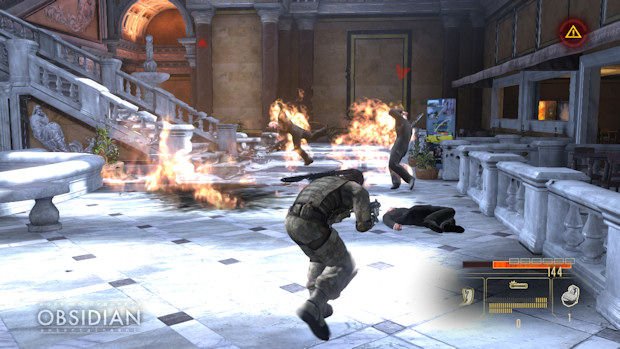 Destructoid: Alpha Protocol, from the looks of things, is a dyed-in-the-wool spy game, complete with gadgets, intrigue, and cheeky sexual liaisons. What drove the decision to make a spy-themed RPG, and has it been more challenging to create a roleplaying game around spies rather than aliens or knights, as is the usual case?

Avellone: The idea came from our CEO, Feargus Urquhart, and our tech director, Chris Jones. Both of them wanted to do an espionage shooter-style role-playing game, and the team took those parameters, and then carried the vision into the creation of the Alpha Protocol you’re seeing trailers for now. We ended up adding some more visually compelling elements to the initial direction (Alpha Protocol takes place in the real world, but we’ve embellished the world and its inhabitants to give it more of a Kill Bill style as opposed to “super gritty and realistic”). We also played around with the character and his role in the adventure more, but ultimately, it’s not far from the initial proposal.

It’s been a great opportunity to stretch our legs in a modern day setting. From a game design standpoint, it’s been pretty exciting, and it’s nice to present the player with “real life” challenges and conversations that have more context in some respects than fighting dragons or orcish invasions. Don’t get us wrong, we love doing fantasy and sci-fi, but sometimes the real world context can be more compelling for the purposes of role-playing.

Destructoid: Considering the wealth of potential that spy games have, there doesn’t seem to be that many games out there exploiting the theme. Why do you think the developers have yet to create their own original spy games?

Avellone: It might be blasphemy to praise other titles, but I think Metal Gear and Splinter Cell do a great job with the spy genre, actually. And I really thought the 24 game had some good elements as well.

Destructoid: When we saw the game at E3, we were told that there would be no true “good” or “evil” in the game. How does this work, especially in a genre that usually requires there to be a nefarious villain pulling the strings?

Avellone: I think a game requires a challenge and an opponent, but in the world of espionage, it’s more in keeping with the setting to have shifting loyalties, and people that respect you more for the work you do and how you carry out a mission rather than simply your alignment scale. For some, it’s patriotism guiding them, for others, the world of espionage is a business, where you don’t burn bridges when your “enemy” can help you achieve your goals. Enemy of my enemy and all that.

Over the course of the game, we’ve worked that into our reputation system — depending on how you carry out missions, how much you’ve researched the people you interact with (dossiers and intel), and also depending on which actions you’ve taken (because enemies can research you as well), you gain positive and negative reputation with the people you speak to. This ranges from them hating you to liking/respecting/romancing you, and there’s different benefits to the positive and negative accumulation of reputation with characters that work to your advantage. The reason for rewarding both scales is because we didn’t want to penalize the player for playing a certain way, just show them different consequences, which I think is more fun in the long run. As an example, having a negative reputation with some characters may make them vulnerable in boss fights, or they may grant you different handler perks if they dislike you but are forced to team up with you in a mission. There’s more, of course: in the world of Alpha Protocol, there aren’t any bad/good choices, just choices — and their consequences. 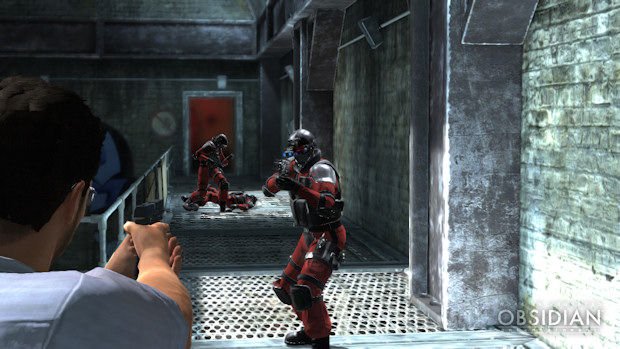 Destructoid: Alpha Protocol doesn’t have the kind of “moral choice” system that other RPGs have attempted to have. Can you explain what kind of choices are instead available to lead character Micheal Thorton, and how players can shape his personality?

Avellone: The player has a series of stances, actions, skills, dossiers they can take into any conversation or mission, and all of these will have an effect on a mission or an individual the player meets. Chances are, other individuals may hear about Michael Thorton and his “attitude” in advance, his background, or his skill progression. They’ll also hear about what stances the player chooses throughout the game (suave James Bond style, more aggressive Jack Bauer, or a cool professional like Bourne), or even the tendency to act rather than talk (shooting a suspect in the knee to get a confession, or pulling out a dossier fact to blackmail or coerce someone): all of these cause repercussions and also can grant the player perks. If a player mixes and matches these stances, or favors a certain stance, we allow the player to communicate their motivation both at the start and end of the game to see if what they initially believed themselves to be is who they ended up being at the end of their mission.

Destructoid: It seems to be a common criticism that moral choices just aren’t as deep or satisfying as players want, and that there is still too much absolute “black & white” in videogame plots. Is this something you agree with, and if so, why do you think that videogames have yet to truly grasp the idea of a morality system?

Avellone: Not really, but I go back to Fallout 1 and Fallout 2 in terms of morality, and there were difficult choices to be made in both of those games.

Destructoid: The game obviously draws many comparisons with Mass Effect. Outside of the genre themes, what are the key differences between the two properties, and where do you aim to improve upon the dialog and choices that Mass Effect presents players?

Avellone: The route through dialogs is different — there’s little to no loops in conversations in the game (much like the real world), and there is a timer present in the conversations to add urgency and immersion in what’s taking place — we felt that this complemented the espionage genre. 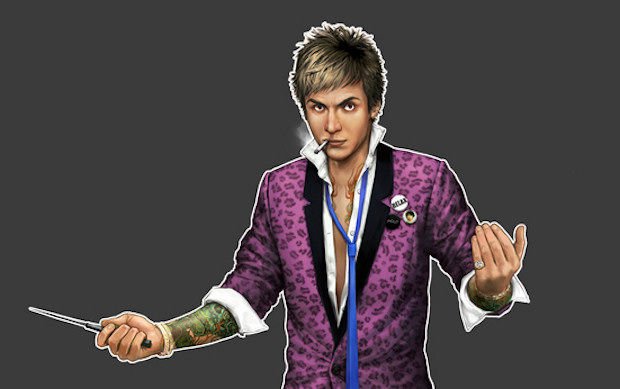 Destructoid: How important is the story to Alpha Protocol? Is the writing particularly involved, or does gameplay come first?

Avellone: The story is gameplay — the alliances/enemies you make in the game effect missions, respect, endgame choices, reactivity, and also special perks for your character as well. Interaction with a character in the game is a game system and gameplay in itself, which was our goal. We didn’t want the story or dialog to be divorced from the missions or gameplay. The debriefing screens alone are pretty amazing for tracking reactivity, and people tend to pour over them to see all the consequences of their actions — both immediate and long-term.

Destructoid: Expanding that question, how important do you think story and writing is to videogames these days, and should it be more/less important? What do you think needs to be done to improve the level of writing in videogames, if indeed you think improvement is needed?

Avellone: It’s important. I don’t think it’s as important as systems design (which is moment-to-moment entertainment), or level design (which gives the systems a context), but the story is an important piece that gives systems and level a reason to exist, and helps to compel the player to move forward. Don’t get me wrong, I love narrative and character design, but I prefer to create story and character mechanics that are game systems rather than divorced from the systems or levels — when the story is a mechanic, in terms of reactivity, perks, mission changes, and open/closing of hubs and endgame choices, I think that’s the purpose of a game story.

In terms of improving stories for games, I feel that narrative designers should study writing conventions outside of games, both in scriptwriting and in other media, such as novels and graphic novels. In addition, a story should not be divorced from the actual gameplay, it should reinforce it, give it purpose, and when possible, work in tandem with a game’s systems and themes. When a story paralyzes a player (watch this cut scene, stop and read this book) or has to work to force itself onto the player with exposition, I think you start travelling down the dark road of cutting off immersion and turning a game into a passive experience, rather than an active one. Also, and to cue off a lecture from Ken Levine, I think much of a story or character can be told in a game level or in the environment itself, without a bunch of text or books littered around the game world.

Destructoid: Sex in games is slowly becoming a more regular topic, thanks to the efforts of both your own studio and BioWare. Why do you think sex is becoming more frequent in games? Is it pure salaciousness or do you think there’s an important step being made?

Avellone: I think it’s an important step, and it’s not sex for sex’s sake, but it’s part of human interaction that makes you more involved in the game world and your characters. Just like in the real world, sex runs the range from entertainment to a symbol of the depth of feeling between two people, and not having that reflected in a role-playing experience feels does RPGs an injustice.

Destructoid: How long do you think it will be before sex in games becomes accepted and not a controversial topic?

Avellone: I imagine TV’s going to be the deciding factor here, not games. As soon as it’s acceptable on mainstream TV, games won’t be far behind. But that’s my guess.

[Destructoid would like to thank Chris Avellone, as well as the folks at Obsidian and Sega, for their time and energy.]