Making my way through the flood of cosplayers at Anime Expo this year I found myself with the chance to pick the brain of Alex Ahad, creator and art director of Skullgirls. If you don’t know much about this sexy hand-drawn 2D fighter that’s set to hit XBLA and PSN later this year, check our our E3 preview. For everyone else, enjoy this friendly little chat I had with Alex’s on his thoughts, inspirations and what the future may hold for Skullgirls.

Where did the premise behind Skullgirls come from?

These are characters that I had designed over time. I always enjoyed designing dark, cute, kind of morbid monster-girl type designs. It’s something that I’ve been doing for fun ever since [my] high school and college days. I ended up piling up a few of them [characters] and thinking of a hypothetical, “oh this would be cool!” fighting game, but I didn’t have an engine at that time. It was just art.

Some mutual friends between me and Mike [Zaimont] told that he had an engine, but no characters, no art. So we hooked up and combined our two halves to make this whole thing. 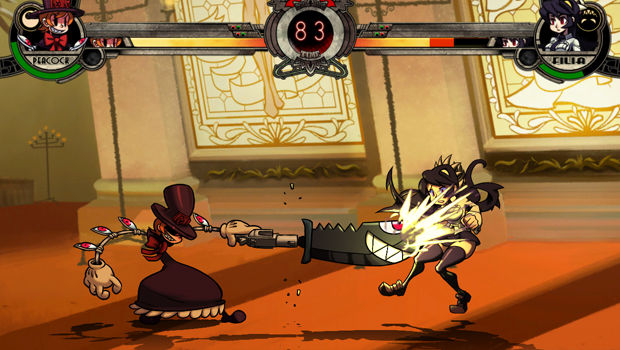 How long has the actual game been in development?

I had been working with Mike on the side… for about a year and a half. Now it’s been a little bit shy of a year, in terms of full-time under Reverge [Labs] officially and with Autumn [Games] backing us up… about 10 months.

The art and animation look fantastic. What kind of hurdles did you overcome to get that much animation in, while keeping the framerate really high?

What were some of your inspirations for the art style?

I’m a huge fan of both east and west stuff. There are a lot of cartoons and anime that I like. Things like Roger Rabbit, Batman: The Animated Series, FLCL and Gurren Laggan. I ended up combining a lot of the things I like into its own style, this sort of weird style of my own.

Also Shane Glines, Bruce Timm, Hiroki Hayashi, George Kamitani — these are all artists I look up to. [I] take elements of those styles and combine them into my own.

Before Skullgirls was a game. I remember seeing the art at Comic Con five years ago.

I usually shared a table with friends of mine. I’ve been pitching the idea of Skullgirls for a long time and selling postcards, buttons, or small sketch books of the art before we got picked up.

How does it feel to have all your hard work come together finally?

It’s pretty amazing. It’s almost surreal because it seems like “I can’t believe this is happening and it’s happening pretty fast too.” It’s pretty surprising, but also very exciting. A lot of trial by fire, but a lot of fun lessons learned too.

For those who haven’t had played Skullgirls, what game would you most compare it to?

The gameplay style is similar to Marvel Vs. Capcom 2 but modified, addressing stuff like infinite combos and custom assists. We [also] have a ratio tag team. You can have three weaker characters, or one really strong character or two medium characters. It’s what separates us from most Vs. games where you are always required to have three characters.

In terms of style and the types of the moves and poses the characters do, I’m influenced by Darkstalkers, Jojo’s Bizarre Adventure and Guilty Gear. You’ll see elements of that both in the gameplay and in style. 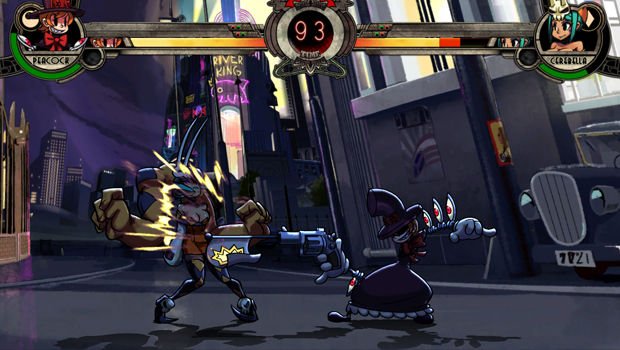 What would you want people to know about the game?

It’s going to start with an initial roster that might seem by today’s standards to be on the smaller size. But we are planning DLC so there’s going to be more additional support to come.  Hold on tight we’re going to have more stuff in there so keep supporting. You can look forward to more awesome stuff for the game. We have a lot planned for it.

Do you have any future thoughts on something else you would want to do after Skullgirls?

I do have other ideas actually. I always try to keep them active in some form in my head. I’ll draw them every once in awhile or just kind of remember them because there are things other than fighting games that I would like to try. I would like to try a metroidvania style game for example. That would be a fun one as I always enjoy that genre. We can do a lot of things once the assets are made too. We can figure something out. It’s kind of fun to think about what can be done both within the IP of Skullgirls or new things.