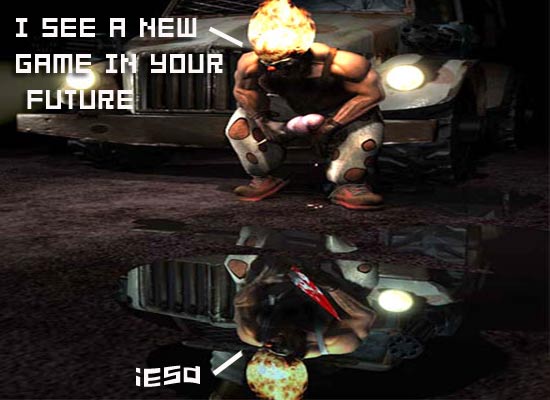 When David Jaffe told readers at GamePro to be on the lookout for clues as to what Eat Sleep Play’s next game would be within Twisted Metal Head On: Extra Twisted Edition itself, he apparently wasn’t kidding.

Compliments of the Internet Matlocks over at GameFAQs, we now know that the answer was right in front of us the entire time — a Twisted Metal game for the PS3! Using advanced cryptography codebreaking tactics known only to the NSA and forumites, member finman was able to deduce the following:

“At several points in The Dark Past documentary numbers flash on the screen. The numbers correspond to the letters in the alphabet.

METAL IS COMING ON PSTHREE”

Talk about Mr. Obvious! For vehicular combat game fans, this is without a doubt, outstanding news. Now for the important stuff: are we talking about a PSN-type game, or a full-fledged Blu-ray beauty? After all, we really need a story mode, David.