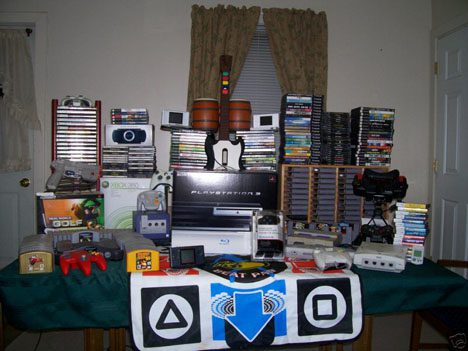 eBay user markcz5581 has tossed a truly massive game collection up for auction. Included in this cornucopia of unabashed nerdity are seventeen (!) home and portable consoles and over 400 games and systems, including an unopened 60GB PS3, an Xbox 360, and — my personal favorite — a Virtual Boy with twelve of the sixteen total games released during the system’s insanely limited lifespan. Certainly something to consider if your eyes haven’t already been ruined by pressing your face up against the TV during rousing matches of DOAXBV.

Additionally, the massive collections of Super NES and Nintendo 64, and Dreamcast games cover just about every A-list title released for the three systems — not a bad start for the budding retronaut. And why would someone with such an impressive catalogue of games try to get rid of ’em? From the listing:

The only reason I’m considering selling this collection is to have enough money to buy my girlfriend of 3 years the engagement ring she deserves this Holiday. I hope to surprise her on Christmas Day with the perfect ring and proposal (and having some extra money to help pay for the wedding wouldn’t hurt either).

Aww, that’s sweet. Unfortunately, this colossal glut of obsession will run you a cool $25,000, and that’s just the opening bid. By my rough estimate I can’t see a collection like this bringing in anything higher than around $15,000 or so, but hey, it’s for love, man.

Oh, and don’t forget — buy the lot at the $75,000 Buy It Now pricetag and you’ll get a Wii to boot. $50,000 ain’t so much to drop on a system when you consider the hours and hours of fun you’ll have, uh– playing ports, maybe some Elebits, and making unflattering Miis for your friends. College is a load of crap anyway, am I right?

Cash in those savings bonds and kill your wealthy grandparents, then check out the auction here.

[Thanks to Teddy Gage for the link.]