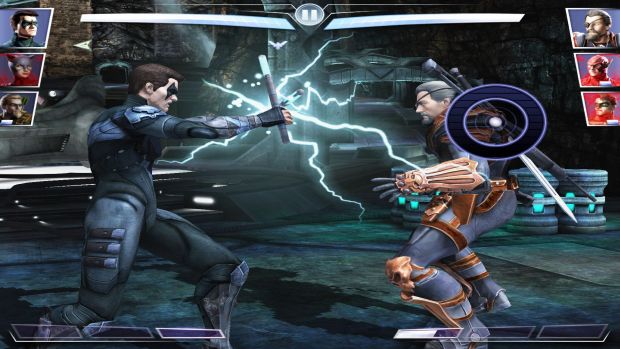 Bringing extras to import to the console game

Par for the course when a big game is about to drop, there is usually a mobile game or an app to go along with it. Injustice does the same, but with plenty of goodies on offer for those that take the plunge, there’s little reason to resist. Plus Injustice on iOS is free, so that’s cool.

The iOS version will have the same character roster and some of the same stages as its big brother, but the similarities end there. The combat system is completely different. Every battle is three vs three tag-team fighting, with fairly rudimentary mechanics based around the touch screen. Basic attacks are done by tapping, with combos initiated by tapping in quick succession. Heavy attacks are performed with swipes and do much more damage, though are considerably slower, similar to how you initiate level transitions in the console game. Finally, you can tag characters in and out by taping on their portrait, but there are no tag combos to be found.

Before a match, you can augment fighters with support cards, which act as passive buffs for your team. As an added touch, each of these support cards dig pretty deep into the DC lore to offer comic fans a treat. The example we were given was a support card with Natas, which would augment Green Arrow’s damage output (Natas being the martial arts master that taught Green Arrow all of his moves). Characters also carry passive bonuses that really come to shape how you build your team. Green Arrow can regenerate health, Lex Luthor can drain an opponent’s super meter, etc. So while the fighting on its own is pretty simple, there’s a lot of planning and number crunching going on out of combat to add some strategy.

You only start out with three characters though, so you will have to play to earn coins which can be exchanged for more of the roster. You can purchase specific fighters and alternates, but you also have to option to buy “booster packs” with random unlocks at a lower price. Coins can be purchased with real-world money as well. So, if your only interest in Injustice for iOS is to unlock additional content in the console release, you can put down a few bucks and be on your way. No word on how much will be available for the console game, but there will be bonuses, such as the Flash New 52 outfit, that you will get just by downloading the iOS app.

No solid release date was given, but can expect to see Injustice on iOS universal (excluding iPad 1, iPhone 3G, and iPhone 3GS phones) launch in the coming weeks.