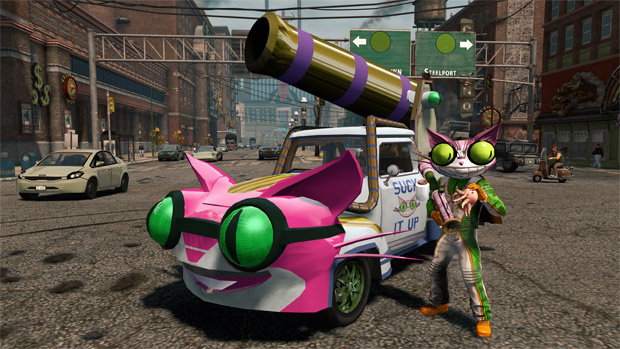 Volition has teamed up with the insane minds behind hit television show Professor Genki’s Super Ethical Reality Climax to deliver ridiculous Saints Row: The Third goods to those who pre-order.

Professor Genki’s Hyper Ordinary Pre-Order Pack includes gear from the professor himself, including: the Super Ballistic Man-a-pult, an “Octopuss” Cannon, and a Leisure Stunt Suit.

We’ve also got details on the Platinum Edition of the game. It comes with the aforementioned content, the exclusive Saints Row: The Third in-game soundtrack, and “a custom-modeled Saints Row headset, featuring an auto tune voice processing feature inspired by Zimos the pimp.” Pretty much, yeah.

This is almost certainly the first time a trailer for pre-order bonuses has made me laugh. You’re doing good work with The Third, Volition. Hit the gallery for more info on the special edition.