Also: Street Fighter’s Vega is in The Phantom Pain. Sort of.

While in Japan to preview Metal Gear Solid V: Ground Zeroes, I was taken on a tour of the Kojima Productions offices. In theory, there’s a certain magic to getting to go behind the scenes of where videogames get made. In reality, videogames are usually made in regular offices, with desks and cubicles, and because of this, studio tours can sometimes be a bit dry.

Thankfully, that wasn’t the case here.

Now, by no means am I complaining about getting to go on studio tours, but as someone who grew up watching behind-the-scenes features about movie special effects, there’s a certain disappointment to know that videogames are created by a lot of hard-working people sitting at desks, doing stuff on computers, and not a bunch of crazy guys kit-bashing Halloween masks and blowing up model kits in a parking lot. 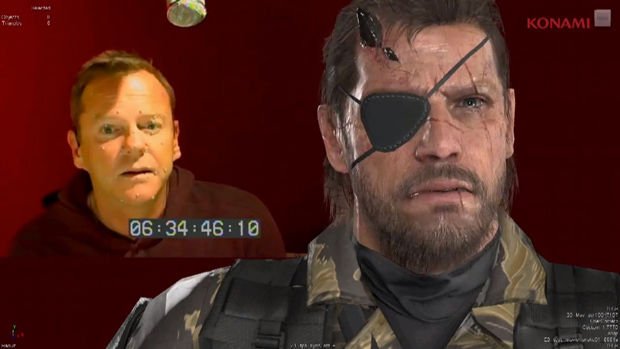 Now, Kojima Productions is definitely an office. There are desks and conference rooms and water coolers, but some special effects work takes place there, too. Videogame magic, if you will.

If you’ve been following coverage of Metal Gear Solid V, you’re probably aware of the fact that in order to make it, Kiefer Sutherland had to have some balls on his face. You know, those little tiny balls they use for performance capture.

Dozens of infrared cameras track the motion of each little ball from every angle, then a computer somehow turns that into a badass videogame character beating people up. Ground Zeroes and The Phantom Pain rely heavily on performance capture and motion capture, using it for the vast majority of characters. However, there’s one rather fascinating exception: Code Talker. 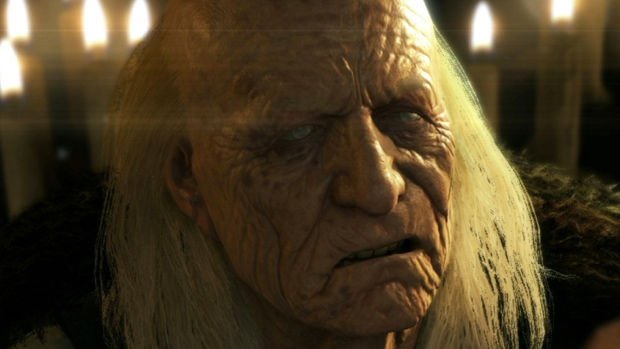 If you caught The Phantom Pain trailer (if you haven’t, there are reasons why you might want to avoid it) you might recall getting a glimpse of the elderly Native American fellow named Code Talker. While there was undoubtedly no shortage of performers available for the more normal (and I use that word very lightly) looking characters, I can’t imagine there are a whole lot of centenarian actors of indigenous descent working in Hollywood these days.

So, Kojima and co. did the next best thing: they called up Digital Domain, the guys who helped turn Brad Pitt into Benjamin Button, and asked them to sculpt an old man’s head from scratch. 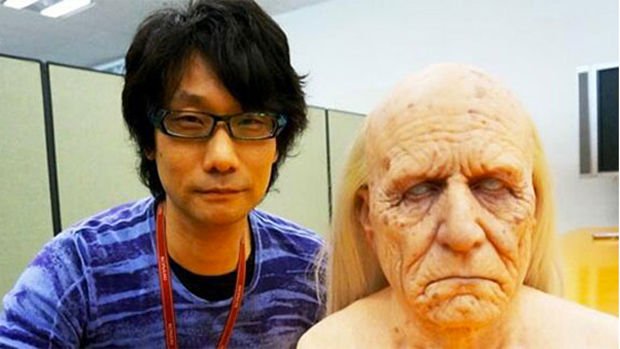 If you’re unfamiliar, The Curious Case of Benjamin Button was a 2008 David Fincher film in which Brad Pitt’s titular character ages backwards. The film won Academy Awards for both makeup and special effects, so it’s understandable why Kojima would hire Digital Domain.

The studio created an upsettingly realistic latex bust of Code Talker, which I got to see up close during my tour. The picture above doesn’t do it justice, it’s disturbing in person.

If you’re amazed that Hideo Kojima let me photograph him with his creepy rubber head, don’t be. No recording of any kind was allowed during my tour, so everything you see here has been found online. 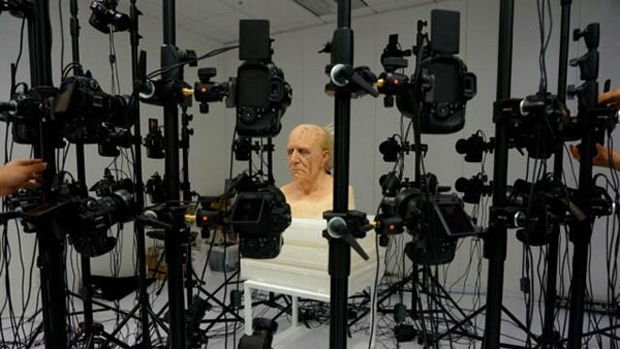 The creepy rubber head was a good start, but it was up to Kojima Productions to turn it into a living, breathing videogame character made out of polygons and textures and math problems.

To do this, they scanned the creepy rubber head, using the same performance capture technology they used for Kiefer Sutherland’s performance as Snake. This is done in a completely white room, so there’s as little lighting interference as possible, and the performer is filmed from every angle. The whole setup looks like the worst nightmare of someone who’s afraid of having their picture taken at the DMV. 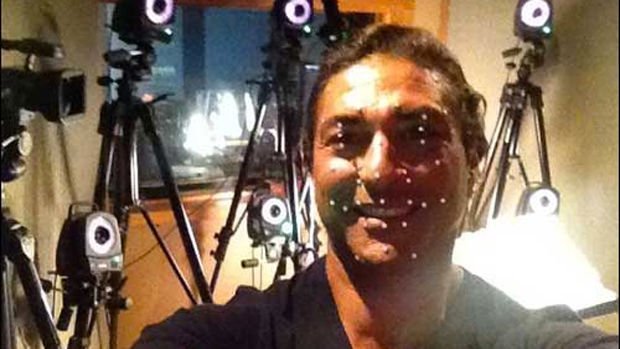 After that, Jay Tavare (who you might remember for his role as Vega in the live-action Street Fighter movie) will have lots of little balls put on his face, and will play the part of Code Talker. Tavare speaks the Navajo Diné language, which, considering Code Talker’s name, will probably be a big part of his performance.

Tavare’s facial movements will then be transferred onto the digital scan of the creepy rubber head. From there, animators will go through the character’s movements and make necessary adjustments by hand. As Hollywood tries to fill live-action movies with as much computer-generated imagery as possible, developers like Hideo Kojima and David Cage are striving to put live actors into videogames. Go figure.

In addition to the facial mo-cap studio, I also got to visit the full-body performance capture playroom that Kojima Productions has been using. Aside from the thousands and thousands of dollars of cameras and computer equipment, it reminded me a little bit of elementary school gym class. Blue mats on the floor, large foam pads for gymnastic tumbling.

Normally, highly trained mo-cap actors don the silly-looking ping pong ball costume and do cool tactical karate movies and stuff, but during our tour, they just had one of the guys from the animation team come out and tiptoe around. On a nearby monitor, an uncolored but very detailed render of Snake mirrored his movements.

It was one those very basic tech demonstrations we’ve all seen a million times in developer diaries, but seeing it happening in real life was still pretty impressive. 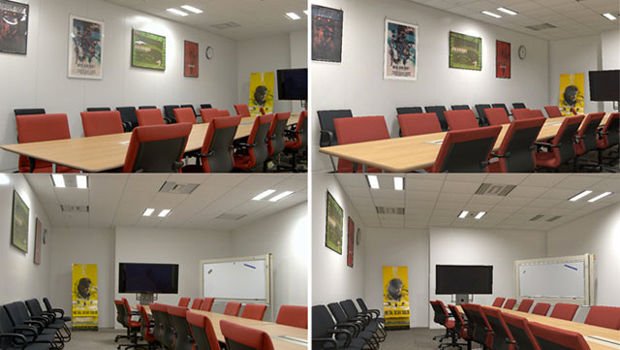 Next, we were led into what seemed like an ordinary conference room, but which felt oddly familiar. Then I remembered why. Pictures of this very conference room had been released alongside screenshots of a photo-realistic rendering of it. These screens were primarily intended a demonstration of the Fox Engine’s graphical capabilities, but also to show how funny it would be if a horse got into the conference room, as well as what it would look like if they spruced up the place with some tasteful hovering orbs and cylinders.

On a more practical level, the reason Kojima Productions went to the trouble of rendering an entire conference room is as a means of calibrating the lighting within the Fox Engine. It makes a lot of sense, really. It’s a bit like using a sheet of office paper to calibrate the white balance on a camera, assuming you went through the trouble of cutting down a tree and milling the office paper yourself. 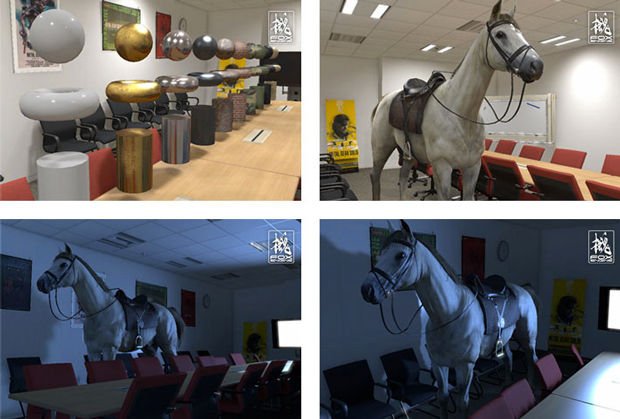 It’s not quite as thrilling as everything else I saw, but my inner ten-year-old basically exploded when I saw the wealth of reference materials Kojima Productions had amassed.

An entire hallway was lined with shelves containing every type of media you could possibly need to look at while making a Metal Gear Solid game. Videogames, movies, comics, manga, art books, and encyclopedias of everything from tanks to motorcycles to horses.

Around the corner from that was a corner devoted entirely to replica firearms. It looked like the bunker in Terminator 2 where Arnold finds the mini-gun. 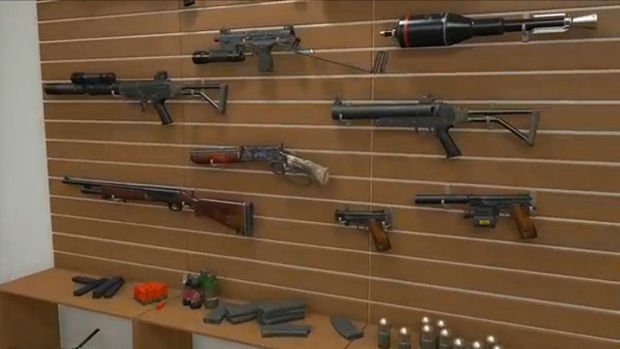 Possibly the most fun part of the tour was a visit to Kojima Productions’ in-house recording studio and a demonstration of how the game’s sound effects are made by their foley artist.

Inside the booth, there’s an array of microphones, and a pile of ordinary household items with a few pieces of army surplus gear scattered about. In the center of the floor was an odd little raised platform, divided into sections holding different materials. One with a slate flagstone on it, another a piece of plywood, and a third had gravel spread across the bottom. Next to all this was a pile of worn out shoes, like you’d find by a family’s front door. 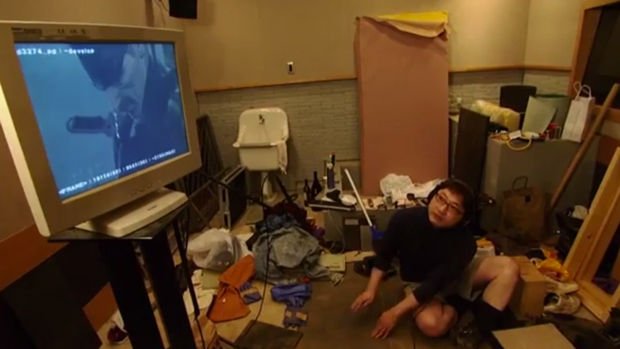 Then, we were asked “who can tell which of these are Old Snake’s shoes?”

Someone suggested military-looking boots. The foley guy slipped his stocking feet into the boots and stepped onto the flagstone platform. He walked in place, and through the monitors, we heard what was definitely not Old Snake’s footsteps. The cool cowboy boots with the straps turned out to be Liquid Ocelot’s. The big frumpy grandpa sneakers were Raiden’s. 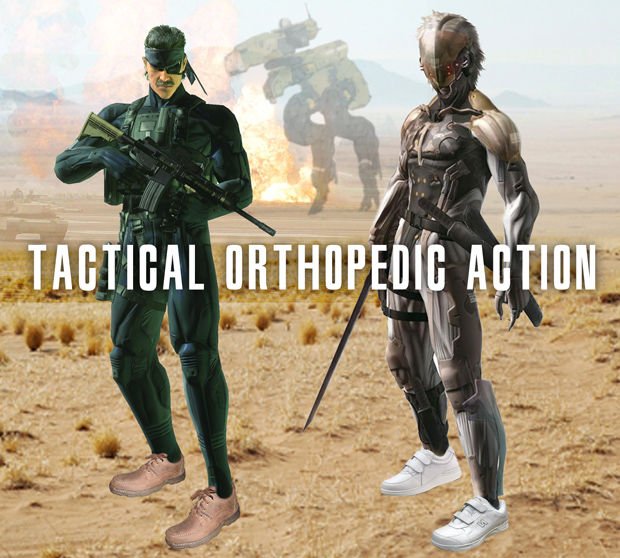 Appropriately enough, Old Snake’s footwear of choice is a pair of worn-out Hush Puppies. What better footwear for stealth? Plus, this is Old Snake we’re talking about, so clearly he’s more concerned with comfort than fashion.

Each character’s walk sounded entirely different, partially because of the variation in footwear, but also because the foley artist would adjust his weight by holding onto a chin-up bar, with heavy footsteps with his full weight for big manly PMCs, and the softest pitter-patter for Sunny. 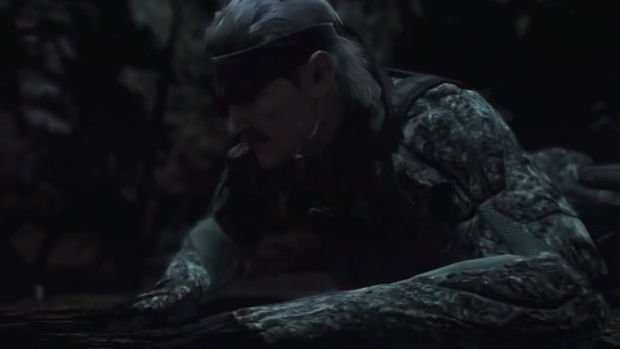 Using footsteps to create the sound of footsteps is pretty obvious, but we got to see and hear some more creative means of creative sound effects. On the screen in the studio, one of the cutscenes from Metal Gear Solid 4 was playing, from the beginning of the mission in South America. In the scene, Old Snake is lying on the jungle floor, and we see an actual snake slither from under a bush and attack a guinea pig. Then, a centipede crawls across Old Snake’s arm.

We watched all of this without any sound. Then, we watched the clip again, accompanied by the sound of a wet rag being loosely rubbed on the flagstone panel, inches from a microphone. Done in synch with the footage, it made an incredibly believable slithering sound. The clip was rewound again, and we learned that the sound of a centipede can be made by running a crappy flip-phone up and down the bristles of a push broom. To think, I’ve been paying perfectly good money for gross centipede-noise ringtones when I could’ve been making them at home!

In all seriousness, I’ve been a fan of Metal Gear Solid for over half my lifetime, which is a rather staggering realization. With that much anticipation and excitement built up, I could’ve very easily come away from this tour completely crestfallen, saying “eh, it’s just a regular office” and sounding like a totally jaded douchebag. Thankfully, I got to see a creepy rubber head, learn how to make centipede noises with a broom, and stand in a conference room that looked just like CGI.