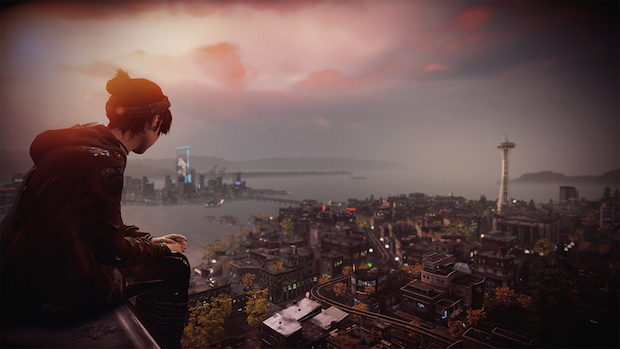 The power of neon!

Jack of all trades, master of none. Sure Delson from Infamous: Second Son has the ability to suck up other people’s powers for his own, which is pretty cool in its own right. But those that just have one specific power to manage have way more control over their gifts.

Case in point, Fetch is just a badass. I loved speeding through the city non-stop. That’s right, you’re not metered down here — you have unlimited use of your dash ability. Here other power sets are pretty cool too, but largely resemble Delsin’s. Projectiles, hover jump, super attacks — it’s all there, but you know, all neon-y.

The core of the story follows Fetch when she gets by the anti-Conduit department, and goes up until the point Delsin and Fetch meet. So you’re getting about five hours worth of content with this First Light standalone DLC. You’ll only be exploring the first whole island of Infamous‘ Seattle.

On top of the story is a wave-based horde mode where you can compete for the highest score on leaderboards. And if you own Second Son you can use Delsin in this horde mode.

If you liked Second Son and don’t think $14.99 is a whole lot, than you won’t go wrong with First Light.