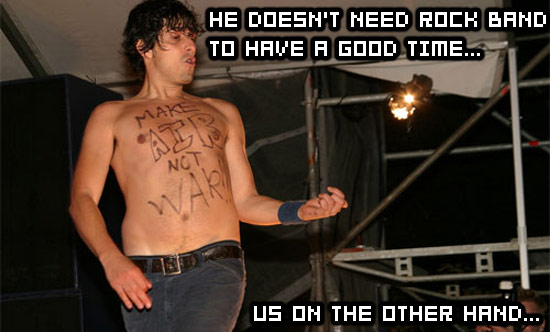 Speaking with Next-Gen, Alex Rigopulos (CEO of Harmonix) has revealed that the individual Rock Band peripherals will be out on the market as soon as possible. Rather than listen to me rephrase Alex’s words, why not read a few quotes from the man himself:

We are working diligently to get individual instruments into the channel as soon as humanly possible and we have a huge effort in place to make this happen.

Harmonix supports open platform standards in our game design, so people will most likely be able to use their existing peripherals with Rock Band.

Also, note that standalone software will be available at launch.

For those of us who already own multiple Xbox 360 guitar controllers or just plain don’t want to purchase the full $169.99 Rock Band bundle, this news byte is simply fantastic.

While Rigopulos doesn’t give any specific dates or price points, his words do allow us to hope that the individual peripherals will be released before February 4 of next year. For the love of all things holy, please don’t make me turn to eBay so that I can play the virtual drums with my friends when they get Rock Band on launch. That’d be cruel.