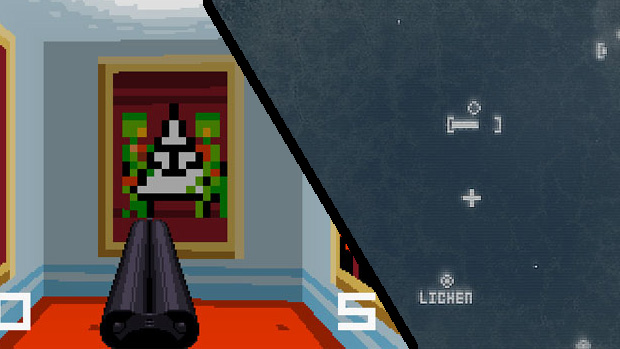 The Sound of Music

Venus Patrol is a great idea. An indie-focused website hosted by none other than Brandon Boyer who, among other things, is the chairman of the Independent Game Festival. There’s a subscription model for Venus Patrol that nets you some really neat bonuses, including two amazing indie games.

Gun Godz was created by Vlambeer, also known as the brilliance that brought us Super Crate Box and Dinosaur Zookeeper. It’s an old-school first-person shooter game with some delightful level design. Capsule came from Adamatonic, aka “that dude who made a certain one-button platformer. You may have heard of it, it’s called uhh….Canabalt, I think.” At least, that’s how I refer to him. Canabalt was one of the first single-input platformers I ever played and enjoyed, so it’s only natural that Capsule is equally as great (and simple).

These games, especially their music, are goddamn inspiring in their simplicity.

Gun Godz has a z instead of an s in its name for a reason: it doesn’t give a shit. This is a pure, unadulterated, and enjoyable romp in the vein of older first-person shooter games like Doom or Duke Nukem. Each level will ask you to accomplish three goals: kill everyone, get all the items, and perform a speedrun. Doing these objectives will net you Triangles. At least, that’s what I’m calling them. As you accrue Triangles, you begin to unlock secret stages, which are easily the best levels in the game.

Gun Godz is so unapologetic it hurts. That kind of rush that only comes from using a minigun to mow down an entire room of enemies is something I haven’t had the joy of experiencing in a very long time. You know exactly what you’re getting while running through the regular stages, which is exactly what makes the secret levels so much more entertaining.

If you ever read about Gun Godz and the writer fails to mention the music, stage a protest. The music in Gun Godz is…..well here, just listen to the title music:

It’s hip-hop, it’s electronic, it’s freakin’ weird. It fits the oddball and hectic theme of the game incredibly well, however and I wouldn’t have it any other way. Oh god, I can’t stop listening to it! All I can say is thank you, Kozilek, for reminding me that I love a style of music I’ve never heard before.

Capsule is an incredible game. What it manages to pull off with so little is astounding. It’s a purely atmospheric game that gets me as tense and nervous as any big-time horror title ever has (aside: I am a scaredy-cat when it comes to this stuff). All Capsule consists of is traveling through space, looking for various space stations to dock at while keeping your Power and Oxygen in check. Each space station also has some message logs that help set the eerie tone and string you along to each new area.

Capsule has both a minimalistic look and feel, but that doesn’t detract from the game at all; in fact, it works in its favor. The sound design is the true star of Capsule. The sound is done by Robin Arnott, perhaps most famous for his work on Deep Sea, a terrifying audio-only game about escaping “unseen terrors.” The sound of hulking metal moving through space combined with the harrowing sound of breathing makes for one of the most intense experiences ever.

It acts as a staunch reminder that the sound design in videogames is just as important as any other aspect. Too often do consumers get caught up on the graphic fidelity of the game and too often are the smaller — but just as important — details overlooked and ignored.