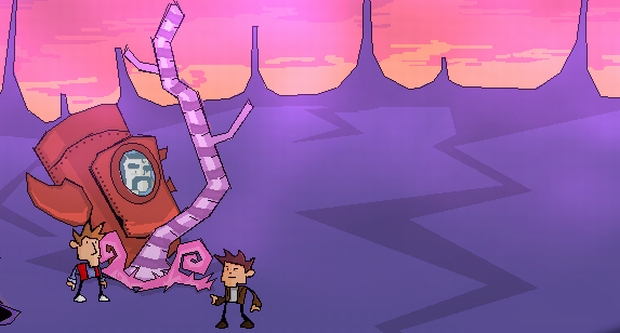 Our Indie Nation series highlights interesting videogames from — wait for it — independent developers.

Amusement, and shame. These are the two emotions that every single classic LucasArts adventure game inspires in me. I laugh endlessly at Sam and Max Hit the Road, while I shake my fist in the air at the game’s more ridiculously obscure puzzles. I consider insult-swordfighting one of the most comedic puzzle mechanics ever invented, but I’d still argue that no normal human being could ever be expected to complete LeChuck’s Revenge without consulting a walkthrough. For better or worse, this is the relationship I am doomed to have with classic adventure games: I love them dearly, but they do not love me back.

In this respect, Time Gentlemen, Please is a triumph. Cultural references and charmingly ugly art notwithstanding, LucasArts could have released Zombie Cow Studios’ latest opus fifteen years ago and we’d look back on it with the same nostalgic fondness we reserve for the Full Throttles and Day of the Tentacles of the world. It’s hard enough to make me feel incredibly stupid, but it’s about as consistently laugh-inducing an adventure game as I’ve ever played.

If you found the latest Tales of Monkey Island episode as painfully unfunny as I did, Time Gentlemen, Please! is for you. If you think adventure games have gotten too easy over the years, Time Gentlemen, Please! is for you. If you’re a fan of time-travel puzzles and highly referential British humor, then the-thing-I-just-ended-the-last-two-sentences-with. You can try the demo or buy the game (five measly bucks) here.

I’d recommend first playing its prequel, Ben There, Dan That!: it’s a free primer for the basic experience you’ll have in TGP, which references it pretty heavily. You have effectively no excuse not to try it.

You do, however, have an excuse not to hit the jump as I go on about why I like both games. I’m still gonna do it, though.

If you’re frightened of difficult adventure games, then:

A. I don’t blame you, as difficult adventure games basically just function as one big round of “let’s all try to guess what arbitrary solution the developer had in mind”

B. Both Ben There, Dan That and Time Gentlemen, Please are still worth playing. The former because it’s pretty easy — Telltale episodic series easy — and the latter because it’s really goddamn clever.

These are adventure games for people who love adventure games, full of three-headed monkey references and jokes about combining inventory items. As was the case with every other classic adventure game I’ve ever played, after an hour with the game I needed to play with a walkthrough right in front of me. TGP is hard, sometimes in a “yes that’s the correct solution to the puzzle but you’re not supposed to know that’s the answer yet because you haven’t talked about a specific thing with a specific NPC, so what you’re trying to do won’t work” kind of way, but both games are relatively fair for the most part.

If nothing else, TGP includes time travel puzzles. You know: the kind of thing where you watch a dude get shot in the dick and then go back in time and put a bulletproof flask in his underwear and then watch as the timelines shift and his corpse turns into a living person. The kind where you get fuel by grabbing a hunk of a Nazi dinosaur’s nose and fast-forwarding its internal timeline so it turns into crude oil.

As is the case with something like Sam and Max, when I consider Time Gentlemen, Please, I’m really looking at two different games: in one, you solve difficult puzzles and are rewarded with plot progression and even more difficult puzzles. In the other, you examine, grab, and talk to every single thing around you. You do so not for the purposes of actually progressing the story, but just to witness every single joke, every clever line of dialogue inserted into the game by the designers. It’s equally fun to just haphazardly click on shit as it is to actually try to solve the puzzles, which is why I don’t regret slavishly relying on an Internet walkthrough anytime I felt even remotely stumped by the puzzles. The writing in TGP is just as enjoyable as the puzzles, if not moreso.

Once again, I’d highly recommend trying out Ben There, Dan That, if you haven’t already (it is, once again, pretty short and totally free). If you enjoy BTDT‘s characters and sense of humor, Time Gentlemen, Please is even funnier.