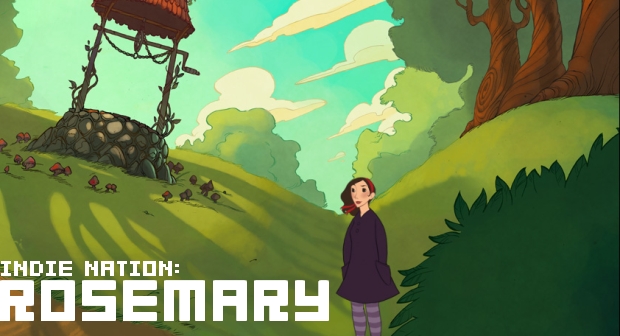 Indie Nation highlights interesting, independently-made games. Which you probably could have guessed.

I have a confession to make: I’m not really a fan of the indie adventure game scene. Apart from the odd deconstructionist works like Snow, most indie adventures belong to the charming, but oft-frustrating school of Sierra and LucasArts design: their interfaces needlessly separate the simple act of interaction into a dozen different verbs, and their puzzles often require the player to read the  designer’s mind.

It was with some skepticism, then, that I played Rosemary at Nick Chester’s suggestion. I entered the game fully prepared to exit and delete it at the slightest sign of an unnecessarily complicated inventory puzzle.

I found something much cleverer, and much more unusual than what I expected. Yes, you use inventory items on other inventory items, and talk to characters who speak through dialogue trees. That is where the similarities between Rosemary and other adventure games end. As much as I love a good round of insult swordfighting, Rosemary is something far more clever, meaningful and subversive than most of the adventure games I’ve played, indie or not.

For now, I probably shouldn’t say anything more than that: download it here, or hit the jump for my spoilery impressions of the game.

Apart from the very end of the game, the entirety of Rosemary‘s puzzles revolve around rebuilding faded memories in the protagonist’s head. You don’t need to run around, trying to get every single item in the environment stuffed into your personal inventory for later usage. Instead, the player need only fill in essential blanks in the protagonist’s memory by travelling, with a single mouse click, between the real, contemporary world and Rosemary’s idealized, remembered version of it.

It’s not that Rosemary is an amnesiac, thank God — she just forgets bits and pieces of things like we all do. By comparing the world of her recollection with the real one in front of her, pieces slowly click together and make sense. Examining things in the real world makes things appear in Rosemary’s memory; discovering things in Rosemary’s memory allows her to reach new places in the present time. 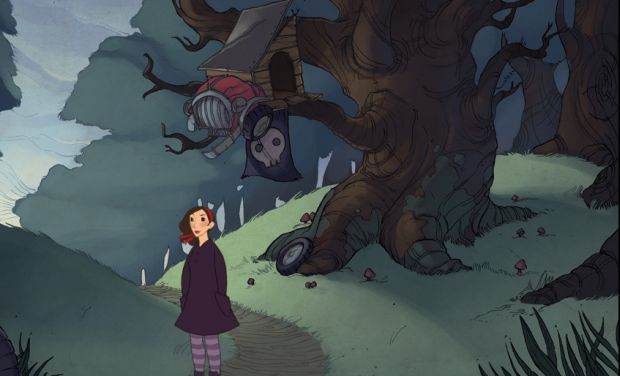 What’s truly remarkable about Rosemary is how this slight tweak on the typical adventure game formula immediately recontextualizes the entire experience, making a mechanically familiar adventure game feel like something enetirely new. Though you don’t acquire too many physical items to use, examining the environment earns Rosemary an awful lot of disconnected recollection items that can be mixed and matched to fit the fill-in-the-blank puzzles that comprise her incomplete memories. The act of collecting these scattered memories is just obvious and intuitive enough that the game has practically no learning curve whatsoever, while still feeling unconventional in almost every way.

Though Rosemary already has a fully-formed background when you first start up the game, it’s noteworthy that every revealed memory feels less like a hamhanded method of delivering character exposition and background, and more like what it’s actually trying to be: a low-level simulation of how we tend to reminisce about things. Our memories seem incomplete, and the missing pieces seem irritatingly illusory until we finally fill in the blanks with a concrete fact that seems so obvious in hindsight.

Talking to the theatre owner reminds Rosemary that the owner’s son wanted to be in their pirate club, but that she and her friend would forbid him admittance because he seemed too cowardly. By piecing together the fragments of recollection in Rosemary’s memory inventory, the memory is complete and voila — the theatre owner’s son appears in the world of Rosemary’s memory, material and obvious and interactive. Of course, if Rosemary switches from the world of her memories back to the “real” one, the kid will disappear instantly, the bright and welcoming treehouse he once sat next to replaced with a withered, decaying collection of wood and tires. 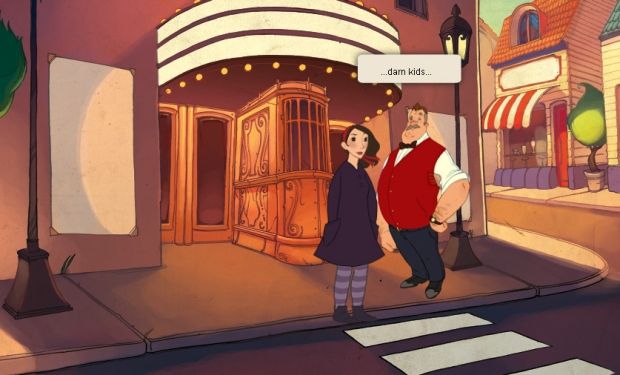 I felt a curious mixture of nostalgic happiness and crushing despair while playing the first 99% of Rosemary, which is exactly what was supposed to happen. The art style and recollection mechanics really made me feel emotions similar to what the protagonist assumedly felt: a sense of longing for times gone by and a weird appreciation for even the smallest, most mundane details of childhood life, contrasted with a simultaneous understanding of the harsh future that awaits everything in those memories. Just in the same way that I can’t think of my first dog without remembering the horrible way she died a few months after I brought her home, none of Rosemary’s pleasant memories can exist independently of the unfortunate present she now lives in.

My only real beef with Rosemary regards the game’s finale. As revealed by an abrupt, prerendered cut scene (BioShock, anyone?), it turns out that Rosemary’s entire pilgrimage to her home town was inspired by the disappearance of her childhood friend, who Rosemary now discovers fell down a well and died the day he found out she was leaving. Apart from the fact that this little revelation suddenly made the game feel much more Tragic and Dramatic than I really think it needed to be, it also unfairly forced me to reinterpret every feeling I’d had about the game up to that point. I was no longer allowed to consider the game an even-tempered reflection on the passage of time and how our memories tend to fade: after the ending, Rosemary could be nothing but A Story About A Kid Falling Down A Well And His Childhood Friend Who Discovers His Body. The subtlety of the mechanics was completely absent from the ending, and honestly soured part of the experience for me.

Overall, though, Rosemary is unquestionably one of the most interesting adventure games I’ve ever played, and well worth a download despite its unnecessary ending. Get it here.