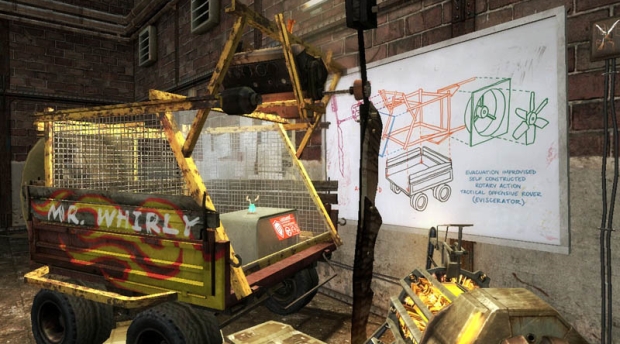 Here is everything you need to know about Research and Development:

– Despite being a mod, it is better than the entirety of Half-Life: Episode One and most of Half-Life 2.

A puzzle-based mod where your character is never allowed to wield a gun, Research and Development has better level design and more imaginative situations than most first-person games I’ve ever played. You know those moments in really well-designed puzzle games like Braid or Portal where a solution reveals itself and you think, “wow — how clever”? Research and Development has about a dozen of those. It also combines action and puzzle-solving with remarkable dexterity, and is seldom frustrating throughout its 2-3 hour running time.

I know we’re only halfway through 2009, but I would be extremely surprised if another mod came out this year that trumped Research and Development in terms of imaginative puzzles and exhilarating level design. I mean, don’t get me wrong — the Radiator series is truly fantastic if you’re in the mood for introspective examinations of the human condition, but Research and Development provides clever fun in a way very few games — nevermind how many modifications — are capable of.

Even if you don’t like the kind of games I normally suggest, I find it hard to believe you won’t enjoy Research and Development. Get it here, or hit the jump for more theories on why this mod is so goddamned good.

I have to admit: with very few exceptions (the Antlion siege in Episode Two foremost amongst them), I really don’t care for the gunplay in the Half-Life games. In this respect, R&D immediately endeared itself to me in refusing to give the player a gun. It’s not that there’s no combat; it’s that the game focuses primarily on setting up terribly imaginative puzzles that just happen to revolve around killing large amounts of people.

At one point, for instance, you’ll come across a group of Combine fighting a bunch of zombies in a flooded generator room. Rather than taking them on with a gravity gun (since you don’t have one, at this point) or running past them (since the game will automatically kill you), you might notice a loose power cable connected to a generator, its other end caught on one of the generator’s many metal protrusions. Grabbing the loose end of the cable, you lower it into the water. Running back into another room, you hit a power switch — and celebrate as everyone in the room, zombies and Combine alike, are fried by your violent ingenuity.

It’d spoil the  R&D‘s charm to explain too many more of its puzzles (even writing the previous paragraph made me feel a bit guilty), but suffice to say that if the dude behind this mod doesn’t get a job at Valve, I’ll be incredibly surprised. The mod’s creator managed to take all the base mechanics found in Half-Life 2 and push them further and harder than I would have ever thought possible. Just when you think you’ve seen everything the game has to show you, it’ll throw out something entirely different that will almost make you wonder if you’re still playing the same mod.

Some unfortunate game-ending bugs aside (typically doing with scripted events not going off when they ought to), I honestly haven’t seen this level of polish and ingenuity in a mod since God knows how long. Considering how long it lasts (my first runthrough took me about two hours) and how much variety the creator packs into every stage, I almost feel guilty playing this game for free. Every subsequent level somehow manages to top the one preceding it (save for a single, fucking irritating level near the game’s end involving a suspended bridge and a rotating  cargo container), until the spectacular final levels.

Seriously, I dunno why you’re still reading this. Get Research and Development here.