I missed last Friday’s Indie Nation. Apologies. I still wanna do one for this Friday, though, so just consider this a really, really late installment of the series.

This time around, I’m gonna slightly break from the formula: rather than highlighting just one game and why you should play it, I’m going to highlight two and talk about their artistic importance. Jason Rohrer’s Gravitation and Rod Humble’s Stars Over Half Moon Bay may look, sound, and feel very different, but they tackle a very similar theme: the creative process.

Granted, they tackle that theme in vastly different ways, which is what makes an analysis of both titles so damn interesting: the two most message-oriented indie designers around just happened to (quite coincidentally, as it turns out) create two vastly different games attacking the same subject from different angles.

You may not find them fun, and you may not initially get them, but these two games are of paramount importance — not only in defining Rohrer and Humble’s different styles, but for the arthouse games movement in general.

Gravitation is about the process of being inspired, then bringing that idea to fruition and the subsequent consequences.  Stars Over Half Moon Bay is about the inherent difficulty in culling ideas from real life and shaping them to your liking before releasing them back into the world. Both of these concepts are delivered solely through gameplay, but in vastly different ways. 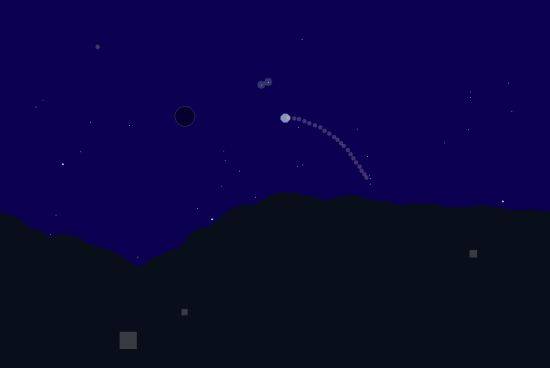 Rod Humble’s Stars Over Half Moon Bay is typically minimalistic, just as The Marriage was (though the addition of music is, to my mind, a pleasurable one). I gave a summary of the play mechanics here, and will copypasta them for ease:

Essentially, the player leads a black and white ball around a starry night sky with the cursor. As a wall of darkness slowly rises from the bottom of the screen, the player can make the black and white balls run over stars, creating a long (but temporary) trail of stardust. The player must then take the white and black balls to the darkness. At the point the balls hit the darkness, a box appears whose size is relative to the length of the stardust trail you had before moving into the darkness.

If you’ve already played the game and you’re still confused, consider it this way: the darkness represents your creative mind, the sky the outside world, and the stars ideas which you bring back into your consciousness and eventually form into a finished product, which you then release into the outside world once again. In SOHMB, as in all other arthouse games by Humble and Rohrer, the game mechanics work as metaphor.

The act of bringing stars back into your consciousness has a single meaning which can be interpreted infinite ways: if you find the process easy, then that says something different about the creative process than if you’d found the entire process tedious and frustrating. Similarly, the amount of pleasure you derive from your completed constellation — was it what you expected? Better? Worse? — says quite a bit. 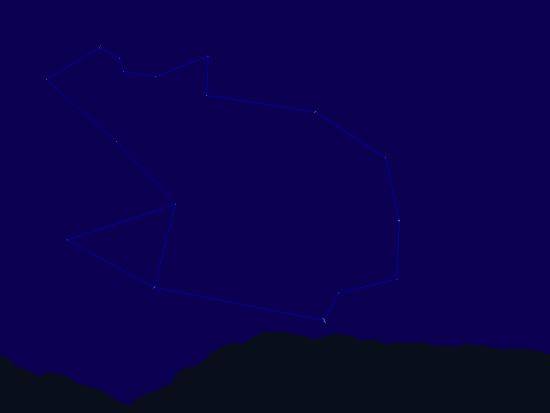 Humble’s games tend to take a more meditative, detached approach to thematic development than Jason Rohrer’s. Humble admits that he generally tries to shy away from using music whenever possible (he only included some in SOHMB because he found out the song’s creator actually wrote it with very similar themes in mind), where Rohrer delights in its emotional effectiveness.  Anyone who played Passage will know what I mean. In comparing Gravitation to SOHMB, the stylistic differences between Rohrer and Humble become infinitely more pronounced.

Gravitation uses a point system in forcing the player to consider the balance between personal life and creative achievement, where SOHMB included none. Gravitation uses complex musical and graphical effects to symbolize one’s awareness of the outside world, where SOHMB focused more on creating a calming atmosphere of quiet reflection.

I’ve heard a lot of people having problems in understanding Gravitation, so I’ll do my best to briefly summarize the symbolic mechanics without spoiling everything.

In order to get the stars (ideas) from the sky (outside world), you have to play with your son to expand your view of the screen (your receptiveness to the outside world) and give you the ability  to jump higher (move into the outside world and achieve said ideas). Grabbing a star causes it to fall back to your home area (home life), where it becomes a difficult-to-move stone with a timer on it. Pushing a star stone into a fireplace earns you the amount of points still remaining on the stone (the quality of an idea deteriorates over time). Getting more than one star at once causes the star stones to build up, separating you from your son, whom you ironically need to play with in order to get more stars. Ultimately, the game shows that pursuing creative exploits both requires and alienates the people you love.

From there, as was the case with SOHMB, it is up to the player to decide what exactly that theme means through play. You can play with your son for as long as is possible to get the highest jumping ability and the most idea stars, but you’ll never see him again and your ideas will become stale as they pile up and can only be pushed into the creative fire one by one. Alternately, you can just play with your son; you won’t score any universally recognized points, but the boy will never leave and your perception of the world will always be at maximium. Or, you can attempt to balance the two, alternately playing with the kid and jumping out to collect stars. The mechanics in place all mean something, but it is up to the player to interpret those means through playing the game. 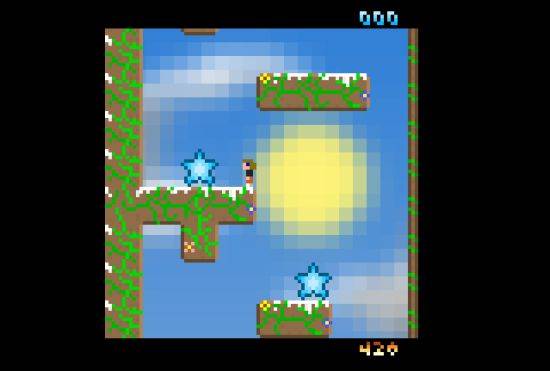 These common ideas between Rohrer and Humble’s games — mechanics as metaphor, interpretation through play — serve as the basis for the arthouse games movement. Granted, Rohrer and Humble are pretty much the only two indie developers actively attempting this sort of thing, so “movement” may be a bit of a misnomer, but these ideas are nonetheless interesting and game-centric enough that we really ought to be seeing a lot more of them. In creating these very personal, very interpretive games, Humble and Rohrer use the medium of games to its very fullest.

They utilize the actual mechanics of control, of goals and rewards, to deliver their themes to the player. They do not use cut scenes, or tutorials, or stories; each mechanic in an arthouse game has an intrinsic, significant meaning which the player comes to understand and interpret through the actual playing of the game.

This is a sort of artistic meaning you can’t get out of a Portal, or even a BioShock; while both those games are great and have something to say, their mechanics are often irrelevant to their themes (apart from, you know, that one spoiler-y part in BioShock). In Passage, The Marriage, Gravitation or Stars Over Half Moon Bay, the mechanics are the theme. This makes them much harder to get into and understand than your average game, but, in my opinion, it also makes them much more original and rewarding.

This is why Rohrer and Humble are usually skiddish about giving tutorials or explanation to the player; half the point of their games comes in playing them and gradually understanding the significance behind each mechanic before personally evaluating those mechanics. Demanding that degree of effort from your player can be distancing, and probably goes a long way in explaining why about half of the comments from my news posts on Passage or Gravitation are usually some variant of “I don’t get it, this is pretentious crap, take your heads out of your asses you indie fags.”

Yet beyond what they share in common, the differences between Gravitation and SOHMB go a long way in showing auteur theory in action. Each game is somewhat autobiographical (Humble wrote his when having trouble with a much more massive game, Rohrer wrote his following the death of a loved one) and simply feels different than the other. You can see the design differences between the two creators, in the same way you can tell one film director from another just by watching their work. You can see different methods of theme delivery, different ways of linking mechanic and idea.

I’m rambling here, but my main point is this: arthouse games might seem distancing or pretentious, and maybe they are, but don’t use pretentiousness as an excuse to toss aside what the games have to offer. These two artists are trying something nobody else is within the medium of videogames, and they’re doing it reasonably well; not everyone will get something out of Gravitation or SOHMB, but that’s not what art is about. And make no mistake — these games are wonderfully, uniquely, and unapologetically art.