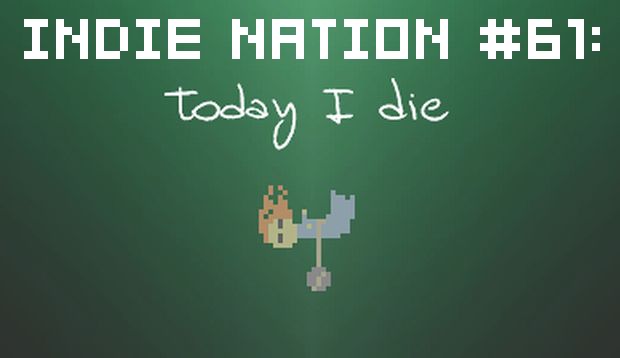 I’ve been putting off highlighting Daniel Benmergui’s work for months, but now that Today I Die is finally live with a functional donation system, it’s finally alright to tell you about him.

Though Today I Die is Benmergui’s most recent game, it’s also the third installment in what he calls the Moon Stories trilogy, which also includes I Wish I Were The Moon and Storyteller. You don’t need to have played these games in order to enjoy Today I Die, but they’re really damned good to begin with so you should probably try them out anyway.

Today I Die is sort of a puzzle-poem game. I’m not going to bother explaining what that means, outside of once again suggesting that you just play it and find out for yourself. As always, you can also hit the jump to hear me rave some more.

I’m having a remarkably hard time vocalizing what I like about Today I Die.

I like that it takes relatively dull gameplay, but makes it new and interesting thanks to the central poem creation mechanic. Even though your interaction with the poem is generally pretty limited, the fact that you progress through the game by adding new words to that poem and essentially making up new themes and ideas with those words is very interesting to me. In order to complete the game, the player is forced to say, “alright — this is what happens in a dead world when I shine…let’s find out what happens when I shine in a dark world.” Without actively attempting to, the player engages the game’s thematic content through this central poem mechanic.

Technically, most past artgames have attempted to do the same thing. By learning how to succeed at something like Gravitation, the player is meant to subconsciously understand what the mechanics at work actually mean. In reality, however, this process is clunky and overly player-reliant in most artgames, Gravitation especially. Rather than simply playing the game and letting these realizations of theme and meaning dawn on you through play, most artgames force the player to just sit and think really hard about what mechanics symbolize which human emotion, and so on and so forth. This is not to suggest that this such mental gymnastics are not a reasonable thing to ask of the player, but they’re also tedious and often feel sort of lazy (my game Runner is guilty of this as well).

Today I Die, however, makes that process of thematic discovery much more streamlined and automatic. You don’t have to spend a half hour scratching your chin, thinking about awkward mechanical symbolism in order to understand Today I Die — the process of emotional and intellectual understanding is immediate thanks to that central poem mechanic. You’re essentially playing the subtext of any given poem at the time, and your actions are effectively inextricable from the frame provided by the poems.

Granted, the game does still lend itself to a bit of symbolism-heavy intellectualizing — one has to wonder what it means to “shine” — but while playing, I experienced a clearer, more immediate emotional arc than I do with most artgames.

So, yeah. Go play it, and then play Benmergui’s other games.