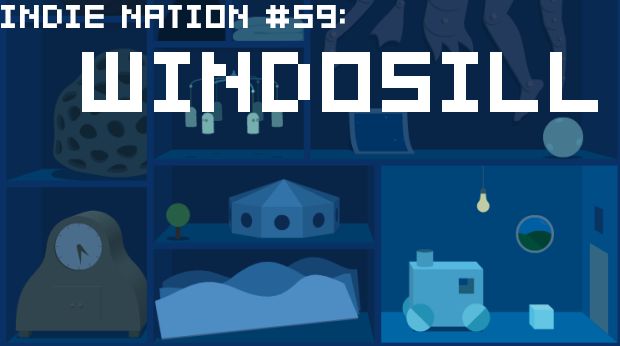 If you’ve ever played a flash-based, pointer controlled adventure game with no inventory puzzles like, say, Samorost (or Myst, if you don’t know what Samorost is), Windosill belongs to that as-yet-unnamed game genre.

Whatever that genre is eventually called, though, Windosill should rightfully be considered the best game belonging to it.

Mixing graphics so gorgeous they shouldn’t be possible in flash with equally stunning physics and vague-but-fair puzzles, Windosill somehow manages to be calming without being boring, challenging without being frustrating, and surprising without being gimmicky. It feels personal and unpretentious despite its aesthetic vagueness.

While Samorost never really did it for me, Windosill takes those same basic design principles and crafts something uniquely wonderful out of them. To say much more on the front page would be to spoil it — play the first half of the game for free here, and then pay a whopping three dollars to unlock the (even better) second half to the game if you’re so inclined.

Or, hit the jump to hear me talk about it some more.

Windosill‘s puzzles are structured in such a way that one is generally prevented from getting too frustrated or bored for very long. By being restricted to one puzzle screen at a time (such a format should prove familiar to Zack and Wiki fans), the player is given a very clear goal — “move to the next room” — and the tools by which he is meant to achieve those goals are, if not immediately clear, at least right in front of the player’s nose. There’s no inventory swapping or item-hunting or backtracking to be found here, because that would be frustrating and needlessly complex.

Since the player’s agency is restricted to one room at a time, I was also prevented from falling back on a dangerously familiar mental space I often go to when playing adventure games, where I assume that either I or the game have made some sort of fundamental mistake, and that the only way to overcome that mistake is to find a walkthrough (and subsequently ruin the game for myself). Since there is nothing to memorize or dick around with outside of the bizarrely attractive forms in each individual room, I never felt like I was missing anything (either mentally, or in the literal game world) integral to solving the puzzles. I felt that I needed to legitimately experiment and strategize my way through the individual levels, rather than just trying a bunch of random crap and hoping for the best.

Not to say that there isn’t a lot of that in Windosill, because the game deals primarily in abstract, “here’s a bunch of weird-looking stuff and you’ve gotta figure out how it all works together” puzzles that force experimentation. But I never felt like I was flailing around, completely helpless — every click taught me something new, and the process of coming to understand these seemingly incomprehensible systems was a gradual and incredibly satisfying one.

This was partially due to the fact that the puzzle structures are as fun to look at as they are to play around with. Every object in the game is sorta three-dimensional and  obeys its own believable set of physics, which doesn’t sound that impressive until one considers the entire game is made in flash. I constantly found myself dragging and extending things while thinking, “this looks too good…this shouldn’t be possible in Flash.” I mean, graphics shouldn’t be the most important thing and blah blah blah, but Windosill‘s graphics and physics make the process of puzzle solving way more tactile and satisfying than it would have been otherwise.

But that’s enough from me. Play through the free version yourself. If you like it, pay the measly three bucks for the second half of the game. It’s more than worth it.