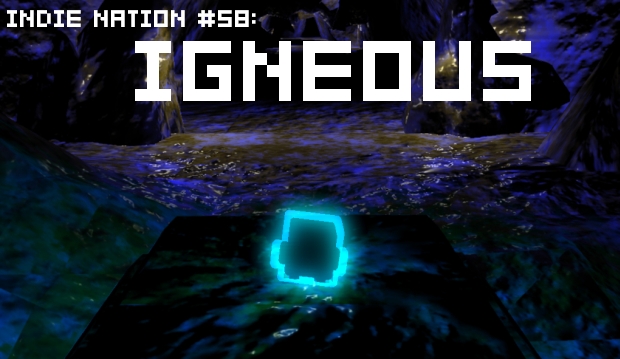 Every Friday, Destructoid highlights a fun, interesting, or just plain weird game produced without funding from a major publisher for our “Indie Nation” series.

I understand how boring that screenshot looks, but that’s just the first two seconds of the game. Stuff gets intense after that.

I have long lamented two things in contemporary game design. Firstly, the lack of legitimately thrilling and frightening chase sequences in action games; secondly, the lack of intelligent and charming protagonists who also happen to be Tiki totems.

Igneous, a free student game out of Digipen, solves both of these problems.

While the development team isn’t done working on it yet, and while the only page I could find linking to a download came from our own community blogs (don’t watch the embedded video there, it’s an almost-perfect playthrough of the entire game that will simultaneously spoil the surprises and make you feel completely inadequate once you start dying), I have to say I enjoyed Igneous quite a bit.

While the controls are a little too stiff and awkward for some of the incredibly fast and precise platforming the game forces you to indulge in, Igneous delivers a fantastically well-paced, surprisingly pretty five minute race against time (and lava). You can download it here or, as always, hit the jump if you want to hear me detail why I found it so interesting.

Even though a perfect playthrough only takes about five minutes, Igneous still manages to cram in three or four discrete levels, each requiring their own separate strategies while still united under an overall theme of panic and intensity. After rolling into the first cavern, there’s never really a point where the player can rest, checkpoints notwithstanding; you’re constantly being hounded by lava balls that hone in on your location, or a rising wave of lava that is perpetually so close to killing you that what would have otherwise been a pretty humdrum vertical jumping section is an edge-of-your-seat experience.

Igneous is incredibly good at making the player feel as if he is literally an inch away from fiery doom at all times, throughout each of its levels. After the aforementioned rising lava section, the player has to navigate a long, windy stone bridge whose sections are constantly being destroyed by projectile debris originating from behind the player.

My first time through this final section of the game, I assumed the bridge destruction was scripted: (A), because it looked so visually spectacular, and (B) because debris constantly hit areas that might force me to readjust my trajectory and strategy. If I thought I was going to have a relatively easy time rolling down a straight ramp, debris would completely demolish the bridge and force me to make a diagonal jump to the next stable section of the bridge.

After dying and playing through the section again, however, I realized something: like the little globs of lava that honed in on the player’s location during the first level, so too did the flying debris destroy parts of the bridge that the game thinks you might want to use. If it looks like you’re going to go in a certain direction with any degree of safety, the game says, “Nope! Now, quickly — rethink your plan and try something else.” The final chase down the bridge is a constant, stressful (in a good way) shift between planning and execution, bringing back memories of Clint Hocking’s GDC lecture on improvisational gameplay.  Since you’re constantly having your strategies dashed, you’re also constantly in a state of tension.

The only (admittedly large) problems I have with Igneous are the controls. The camera moves far too slow, and the Tiki’s movement is far too stiff, for the intensely precise platforming the game requires of you. In the above-linked community blog, community member Marc of Arabia suggested that the game looked a little like Super Monkey Ball, which is unfortunately somewhat true. Rather than feeling like I had precise control over the Tiki, I was never quite sure what jumps I could make and which I couldn’t. The Tiki moves in a very stiff manner, whether it’s jumping or just rolling across the landscape. I kept feeling an itch to turn up the sensitivity not only on the mouse-controlled camera so I could see where the heck I was going (at least once I fell off a cliff  because the camera couldn’t turn quick enough), but also to make the TIki more manueverable in the air. I kept over- or under-shooting most of my jumps during the lava river level, but I never felt like I was learning anything from those failures — I was constantly bewildered as to exactly how to make the Tiki control the way I wanted to, which would explain why it took me at least five tries to complete the final level.

Overall, though, Igneous is a really short, really entertaining work-in-progress that I’m very interested to see develop into something greater. The game’s eye for pacing and level design cannot be denied and, despite some unfortunately stiff controls, Igneous is still pretty damn exhilirating.

You can get it here.