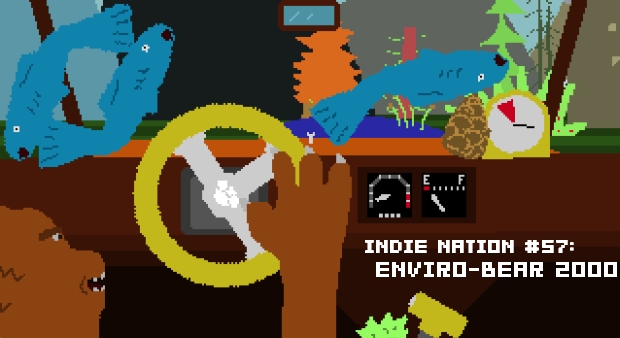 Voting is still open for TIGSource.com’s Cockpit Competition, but regardless of who actually wins first place, this week’s highlighted game will always be number one in my heart. Specifically, the part of my heart that loves quoting otherwise awful cartoons.

Yes, Enviro-Bear 2000 is the best, and only, bear-driving-a-car simulation money can’t buy.You do the typical bear thing — fishing, eating berries, and hibernating — but you do so from behind the wheel of a goddamn car.

That should really be all the suggestion you need to try this game out. If you still need to know why Enviro-Bear 2000 is worth your time, however, you can always hit the jump and listen to me rave about it some more.

My initial reaction to Enviro-Bear 2000 was an obvious one — I laughed. The prospect of a game in which you not only control a bear from the first-person perspective, but one in which you control a bear driving a realistically functioning automobile felt too wacky and original not to be funny. The bad-yet-good graphics undoubtedly helped the hilarity factor, as well.

The way you control the car, via manipulating the actual pedals and steering wheel and gear shift with your mouse one at a time, initially seemed funny as well. “Ha!,” I said to myself, condescendingly. “This is what it would really be like to drive a car if you were a bear! I guess!” That Crackerblocks, the game’s creator, took the actual control scheme so seriously was of equal laugh value.

And so I played. And I kept playing. And after about ten minutes, it stopped feeling funny and started feeling really goddamn clever.

You’re given very few actual things to directly interact with in Enviro-Bear 2000, but they all feel so completely believable, and interact with one another in such legitimately interesting ways, that the game truly begins to feel like an imaginative, enjoyable experience beyond the mere scope of its absurd humor. When I referred to Enviro-Bear 2000 as a “simulation,” I wasn’t joking.

Consider, for example, what happened when I hit a boulder. Small pebbles rain down into the car through the sunroof, obscuring your vision and cluttering the cockpit. Initially, I just tried to throw the dozens of pebbles out of the car, one by one. As my time limit ticked down, however, I just tried to clear them away from the windshield by pushing them down beneath the dashboard where they wouldn’t obstruct my view. This caused an entirely new problem, however; pebbles rolled underneath the brake and gas pedals, preventing either of them from being pushed downward. I quickly grabbed the pebbles and threw all but one out of the window. The lone, remaining pebble rolled across the dashboard, down the steering wheel, and landed smack-dab on top of the gas pedal.

And suddenly, the car friggin’ floored it.

Where I’d spent 99% of the game manually pulling down the gas pedals with my hand when I wanted to move, awkwardly moving from the gas to the steering wheel and hoping my momentum would maintain long enough for me to steer where I needed to go, this simple incident with the pebbles showed me just how much I was capable of doing within the confines of this car. I could weigh a rock on the gas, leaving my hand completely free to steer the car. I never thought it would have been possible in a game as presumably simple as this, and especially not in a game as funny as this, but it was — and it was awesome.

I’m sure that story sounds boring as hell written down, but only once before have I experienced that difficult-to-describe feeling of suddenly having your expectations blown away by a game mechanic which seems so simple and obvious and believable that you’re amazed nobody ever thought of it before. I felt it when I killed my first shopkeeper in Spelunky, and I felt it when I discovered how to simultaneously accelerate and steer in Enviro-Bear. There’s a lot of similarly clever stuff you’ll find after playing for a short period of time — the way a badger can drop into your car if you hit a tree and start switching gears and hitting things he shouldn’t be hitting, or the way eating a really big fish can really clutter your cockpit and cause problems if you don’t throw it away quickly enough.

Granted, the game gets kind of repetitive and irritatingly difficult as it goes on, and there’s not much to do outside of eating stuff and hibernating, but Enviro-Bear 2000 is perfect for spending fifteen to twenty minutes with. Come for the absurdist humor, stay for the limited, but deceptively deep game design.