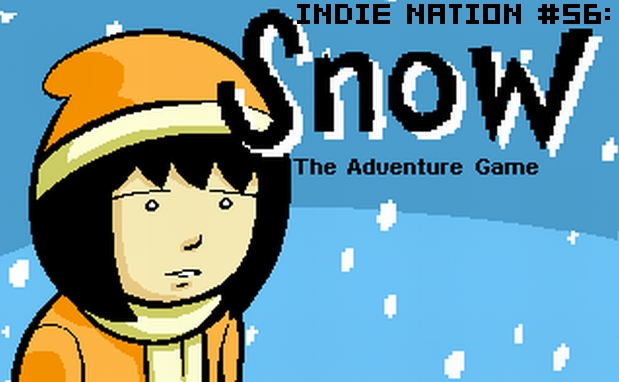 Snow is a game about a girl buying a cup of coffee.

Not in a symbolic sense or in a pretentious artgame sense where you have to decipher what the actual mechanics and input buttons mean on a metaphorical level, and then that metaphorical level eventually reveals itself to be about a girl buying a cup of coffee.

It’s just a five minute adventure game with no puzzles or inventory management where you go buy a cup of coffee and make some very small, but perhaps very important decisions regarding how she deals with other people. It is small in scope and length, and remarkably all the more personal for it. It is intentionally undramatic and unspectacular.

I quite enjoy it. I’d highly recommend it.

Download it here if you want to see it for yourself, or hit the jump as I try to explain why I find this small game so interesting.

Most story-based games, even within the comparatively down-to-earth adventure game genre, tend to focus on the fantastic. You’re not just a college student vacationing in Paris, you’re a college student vacationing in Paris who sees a mad clown blow up a restaurant and subsequently gets drawn into a Templar conspiracy. You’re not just a gentleman thief, you’re a gentleman thief who stumbles upon the machete-wielding ghost of a shunned child.

The reasons for this focus on excitement and intrigue, even within a more cerebral and down-to-earth game genre, are obvious. Adventure games traditionally revolve around obtuse puzzle solving, and over-the-top plots usually result in more “fun” or “challenging” puzzles. This is why I stop playing 90% of adventure games I pick up after about an hour; like, say, Syberia, they tend to start on a very small, very personal, very intimate scale only to needlessly expand the scope of the plot (typically to include a Conspiracy With a Capital C) just for the sake of adding harder puzzles. Additionally, adventure games use puzzles as an emotional crutch in the same way shooters use violence; puzzles are satisfying and relatively easy to design when compared to how difficult it is to include believable, down-to-earth human drama that the player can actively engage with. Facade, being the failure that it is, proves how goddamn hard it is to mix simple, unspectacular human drama with player interaction.

That’s why I like Snow so much. It avoids Facade‘s major design flaws by restricting player choice to only a few scenes, and the repercussions of those scenes really only have relevance in the player’s mind. If you choose to let the coffee shop clerk walk over you but lie later on and say you didn’t, the entire world doesn’t change around you — you’re just asked to think about the choices you’ve made, and consider what they might mean for this one character’s life. Just as in real life, the events of the ordinary day chronicled in Snow do not necessarily have immediately evident, permanent, or far-reaching consequences, but they can be easily interpreted to mean something more. Snow is the simple, unpretentious virtual equivalent of having an exasperated friend tell you a story of something that happened to them today while they were at work. It’s a small, personal, intentionally unspectacular examination of day-to-day life that trades out the needless puzzles and inventory management of typical adventure games for simple dialogue choices and the crafting of a small, yet wholly believable world. It’s an American Splendor comic delivered by way of Monkey Island.

While Snow will probably come off as laughably simple to a fair number of players, it does something that even most contemporary art games are frightened of: it attempts to present a moderately realistic view of reality and allow the player a believable degree of agency within that world. It doesn’t fall back on excessive symbolism or require the player to interpret its actual mechanics to find meaning; it just tries, in its own quirky way, to let you live a day in the life of a meek young woman without indulging in any spectacle or miring itself in high-fallutin’ bullshit. It takes the slice-of-life style of so many contemporary American indie comics (Snow is actually based on a graphic novel of the same name by the game’s creator) and transposes it into a medium where straightfaced chronicles of everyday life are all but nonexistent.

Snow does absolutely nothing spectacular, or awe-inspiring, or life-changing, and that’s why it’s so goddamned good. Play it.

If you like it, check out the comics of Jeffrey Brown, Chris Ware, or Harvey Pekar. There are simply no other indie games made in this style, even though this sort of thing is essentially the norm in American indie comics.