You have never, ever played anything like Sonic Invaders.

Why, you ask? What makes Sonic Invaders so special, especially when compared with the epic action-RPG parody that was Barkley, Shut Up and Jam: Gaiden? How could Sonic Invaders possibly manage to outdo last week’s Indie Nation in terms of originality or fun factor?

Well, for starters, it’s a game for blind people. That doesn’t mean that you can’t play it, of course — you don’t have to be blind to enjoy it — but it was initially created with the sight-impaired in mind.

Given that this free game provides one of the most unusual gaming experiences available , you have every reason to download this game and try it out. Should you need some convincing, however, I’ll meet you after the jump.

Developed by a Greek composer named Aristides Mytaras, Sonic Invaders is the first audio-only game I have ever played. There’s evidently a bunch of them, all of which I hope to try out at some point or another, but as Sonic Invaders was my first it’ll be Sonic Invaders I recommend.

In order to play Sonic Invaders, you absolutely must use headphones. It’s simply not possible otherwise. I’ll explain how that works into the gameplay later; for now, let’s focus on the story.

The narrative, told to the player by a very low, very distorted human voice, may be one of the creepiest things I’ve yet experienced from an indie title (and that’s counting Penumbra: Overture). Essentially, the player is told that in the 21st century, alien invaders attack the planet who can only be destroyed through sonic pulse weapons. The narrator then goes on to inform the player that no matter what, the aliens eventually win and the human race is exterminated; what you are playing is merely a retelling of the events of that war.

I know that doesn’t sound very creepy written out, but just imagine this voice speaking directly into your ear about the death of everyone on Earth while really, really haunting music plays in the background and tell me you don’t feel a little unnerved. 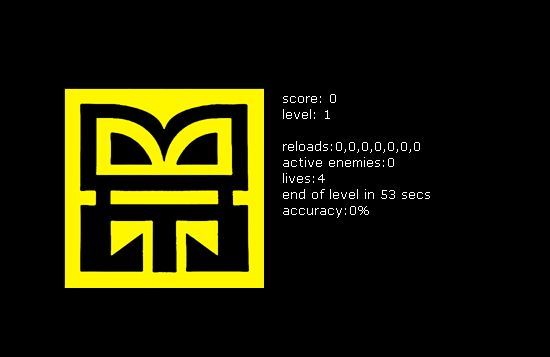 So, basically, it’s Space Invaders with no graphics. In fact, the above screenshot is the only thing you will ever see once you start playing the game.

Control-wise — and this is why you need the headphones — your job is to shoot down alien ships as they approach from seven different directions. The X, C, and V keys fire at 90, 60, and 30 degrees respectively, while the N, M, and comma keys do the same thing for the right headphone speaker. The space key fires straight up and the B key initiates your shields, with which you can deflect enemy fire.

At first, the game seems relatively easy. You hear a ship approaching at a 30 degree angle, so you hit V. Zap, boom. Done. Then another ship approaches. Then another. And another. You frantically try to remember which keys do what as you focus entirely on your sense of hearing, trying to pinpoint the exact angle each enemy ship is coming at. Things get even more complicated when enemies begin moving from one angle to another, forcing you to lead your shots, or when they start disappearing and reappearing just to scare the living crap out of you.

While the game mechanics are very simple, Sonic Invaders‘s focus on audio-only gameplay makes it a hell of a lot more nerve-wracking than it really has any right to be. To hear the sound of an incoming enemy bullet slowly get louder and louder as it approaches from a specific angle, only to crash into your turret with a startling boom, is an experience in suspense and fear I’ve yet to see replicated in games with graphics.

And yet, for all its coronary-inducing intensity and moody audio, Sonic Invaders is still fun. Once you get the hang of the turrets and learn to rely on your ears far more than you’re otherwise used to, the game becomes a — and there’s no other way to say this — completely hypnotic affair. It’s a scary enough game that I cannot see myself getting outright addicted to it anytime soon, but while you’re playing, while you’re completely immersed in the midst of an audio-only space war, it’s hard not to enjoy yourself in some way or another.

You can download the game here. It’s completely free. After you’re done, you can always check out some more audio-only games and let the community know if any of them match up with Sonic Invaders. If nothing else, though, I urge you to download Sonic Invaders and give it a try — especially if you’re looking to play something which feels totally unlike anything you’ve ever played.