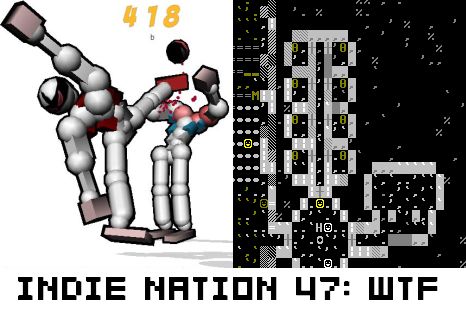 I have failed. Over and over again, I have failed to play these games they way they are meant to be played, whether due to my own idiocy or their ridiculously impenetrable interfaces.

Still, I’ve heard so many good things about both games that I’d feel incomplete if I didn’t, at the very least, mention them to you.

You can hit the jump for a further explanation of why these games are supposed to be good (and why I wouldn’t personally know), or you can just download both of them and find out for yourself. I’ll be holding my knees and sobbing loudly while you do so.

Toribash is supposed to be an awesomely complex turn-based fighter where you individually manipulate the joints and muscles of a ragdoll’s body in order to make him attack. How complicated is it?

I needed a YouTube tutorial to show me how to throw a punch.

As for Dwarf Fortress, it’s supposed to be some sort of incredibly addicting mix of Civilization, Dungeon Keeper, an RTS, and a roguelike that just happens to have the least friendly user interface in history. All the visuals are ASCII, all the commands are mapped to the keyboard — in cosmetic terms, there’s no reason the game couldn’t be on an Apple IIe. Mechanically, though, I guess it’s insanely complex and full of clever procedural generation and stuff.

I wouldn’t know any of this personally, of course, because I’d need to read and study this gargantuan fucking wiki article to even get started with the game.

Here’s the question, though: is it my fault for not wanting to put in the requisite time and effort to learn these games, or the game’s fault for being so goddamn confusing and impenetrable?

Given how Portal, Braid, and World of Goo gradually taught me how to master their pretty-goddamn-confusing mechanics through steady learning and difficulty curves, not to mention some very friendly (yet seamless) in-game tutorials, I’m leaning toward the latter.