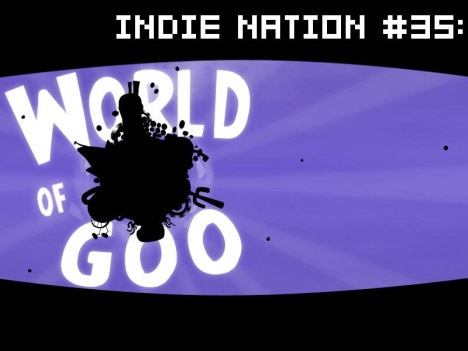 It’s not technically out until Monday, but World of Goo is so awesome that I just plain didn’t want to wait to talk about it. I was initially exposed to it during GDC, and though I found it marginally interesting, it wasn’t anywhere near the top of my mental “do want” list.

Now that I’ve actually played the full game, however, I see that it really should have been.

It hits PC and WiiWare this Monday. You can visit the official site for details, or hit the jump to read my impressions on what, in my opinion, still manages to be one of the coolest indie games of the 2008 despite sharing hard drive space with both Braid and Castle Crashers.

First off, any screenshot one might conceivably find of World of Goo, no matter how awesome the puzzle it depicts, will look boring and pointless. If you’re likely to subliminally judge games based on the quality of their screenshots, then please don’t be dissuaded by the fact that individual stills from the game look like the virtual equivalent of watching paint dry.

Secondly, in my original almost-hands-on impressions from GDC, I said this:

“Since the game is so realistic, though, this means two things: it looks really damned difficult, and really slow-paced. I do not, however, mean these as insults. World of Goo seems difficult and thoughtful in the same way LEGO blocks are; it takes a very special degree of effort and thoughtfulness to make what you want to make really well, but this ultimately makes the final product much more satisfying. It also means that, since the game requires such internal deliberation, it can be tedious to watch.”

I was pretty much wrong on every single count (but that’s what happens when you base your impressions on watching an inept fat chick play the same level over and over again for 45 minutes straight without realizing what she’s doing wrong). World of Goo is not slow-paced, not really damned difficult, and certainly not tedious. It is, in fact, a wonderfully exuberant mix of deliberative construction, lateral-thinking puzzles, and quick reflexes. And Internet memes.

If you’ve played Tower of Goo, the free downloadable prototype, you’re already familiar with the game’s main mechanic. By connecting little balls of black goo together, the player can build towers, bridges, chains, or whatever. The goo physics are so incredibly precise and intelligent that what could have been a really, really boring construction game turns into something truly fun — level by level, you’ll gradually learn the ins and outs of goo architecture, and as the game asks you to do progressively more unusual and imaginative things with the goo, your understanding of the physics engine is constantly stretched and expanded and contorted until what seemed impossible at the beginning of the game  becomes second nature in comparison to the stuff you’re asked to do near the end.

This isn’t to suggest that the entire game is built around the simple act of building goo structures, however. That would get old pretty quickly. No, what makes World of Goo so goddamned incredible is that in every level — in every single level — the designers show you something totally new, whether it’s a new goo ball, a new item, or a totally new scenario for goo-building that challenges your conceptions of what is possible with the physics engine.

For instance, you’ll spend the first few levels building towers and bridges to get your goo balls from one end of the map to the other. It’s sufficiently difficult and very interesting at that point of the game, to be sure, but World of Goo isn’t happy to just let you sit and relax. Instead, a few levels later, the game again forces you to build a goo tower from the bottom of the screen to the goal at the top…only this time, your goo tower is inside a constantly tumbling, octagonal room that cannot be stopped or slowed. What was previously a purely strategic exercise now requires quick thinking, and precise timing. Simply by adding a big washing-machine room, your entire approach to the gameplay is turned on its head.

I don’t want to go into some of the later levels or goo balls or mechanics World of Goo throws at you as that’d spoil the fun, but it has to be said that the game is never content to just sit back and rest on its laurels, challenging the player with slightly harder versions of the same situations. I can’t decide whether World of Goo is totally fearless, or just has the most wonderful case of Attention Deficit Disorder in history — though it’s only a few hours long, every level is incredibly individual, enjoyable, and constantly surprising.

Not to mention that, since the game is more concerned about showing you really cool and interesting things than throwing infuriatingly difficult challenges at you just for the sake of doing so, it never feels frustrating or unfair. If you lose a level, it will almost always be because your approach is flawed, not your execution (if you’ve found yourself frustrated with Portal Prelude‘s constantly forcing you to get jumps exactly right and put portals in the exact correct place in order to proceed, then World of Goo is the answer). When I first saw footage of the game, I was positive I’d be horrendous at it, but it turns out that the level design and physics are so intuitive that you’ll never get frustrated for very long. Hell, even if you do, you can use one of a limited number of level skips just so you can see the rest of the game.

People will complain about the length and the lack of ball-busting difficulty, but if you enjoyed Braid and Portal (and if you didn’t, then what the fuck is wrong with you) then the “quality, not quantity” and “interesting, not pointlessly obtuse” length and puzzle sensibilities will be familiar and satisfying. Also, the graphics, music, and what little story there is are really, really goddamn good. So, there’s that.

World of Goo comes out on WiiWare and pretty much every PC distribution service under the sun this Monday.

Oh! I almost forgot to mention — the PC version has no DRM whatsoever. I often tend to threaten bodily harm to anyone who would think about pirating an indie game, but I don’t think I really need to with World of Goo: the creators (all two of them) respect the gaming audience so goddamn much that they didn’t even bother putting copy protection on their game. If you’ve been angry at the SecuROM nonsense, then put your money where your mouth is and buy World of Goo legally. Lord knows the guys at 2DBoy deserve it.