The original Knytt is, as much as any two-year-old game with an intentionally low-res graphical style can be, an indie classic. It combined the isolated feeling of Shadow of the Colossus with the large-scale exploration of Metroid, all within an aesthetically lush framework. In Knytt, the player could never attack, but could also never lose. It was a game of exploration and relaxation. That, and the controls were absolutely perfect.

While Knytt was pretty good for what it attempted, its map was a little too labyrinthine, and there wasn’t really that much to do apart from jumping around and collecting random, essentially meaningless parts of your spaceship. Knytt Stories, apart from providing an awesome open-source engine which resulted in more than a few badass user-created levels, improves upon all these flaws.

Get the game here, then get some more stories and levels here. Or, hit the jump as I try to hide the fact that I couldn’t beat the original Knytt.

Knytt Stories has a pretty minimalist narrative, though nowhere near as minimal as Knytt‘s (“oh crap your ship crashed now go find all the pieces”). You play as Juni, a legend to the Knytt creatures, who is charged to save her world from an evil machine which sucks the life force out of nature. 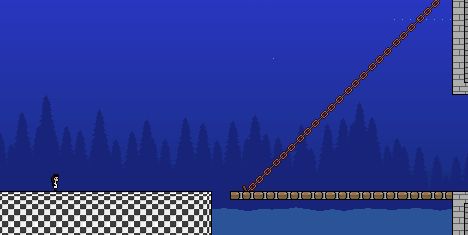 Though that sort of plot summary may conjure bombastic, Final Fantasy VII-esque images of evil corporations and a chick with a sword, Knytt Stories takes a much calmer, more transcendental approach: you’ve gotta stop an evil machine, yeah, but the only real difficulty comes in finding the damn thing. Once you reach it, you’ve just gotta flip a switch to turn it off. There are enemies which can kill you, yes, but you cannot do any damage to them and even if you do die, you’ll simply respawn a screen or two back at the last save checkpoint. Death is only a slight hiccup before you try again, and the ending is beautifully low-key: the pleasure is in the journey, not the destination.

My main issue with the first Knytt was the game’s overwhelming size. The game world, which can only be viewed screen-by-screen (think Oddworld or the original Prince of Persia), was enormous and there were just too many damn things to collect. Knytt was just too big, too spatially confusing, and too time-consuming for me. Knytt Stories, on the other hand, is of a perfect size for people like me who hate backtracking and get lost really easily. It takes an hour or less to finish the entire game (which, compared to Knytt, is so short a running time that the creator, Nifflas, actually refers to the main campaign as a “level”), but it still includes all the calming, rewarding exploration and discovery Knytt was known for. 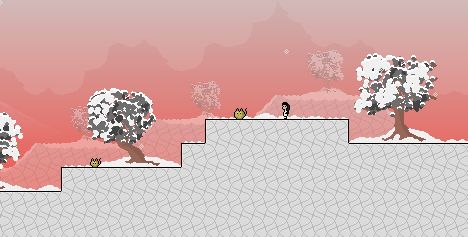 Knytt Stories really differs from its predecessor in that rather than having most all your abilities (climbing, high jumping, etc) at the beginning of the game, you must gradually find both old and new abilities as you progress. As in, say, Metroid, certain areas are impossible to access without exploring elsewhere and finding a new ability. Locking off parts of the world (but doing so very subtly — there are no Big Red Doors you can’t get through without a Big Red Heat Missile so much as you’ll just find a chasm too big to jump over, which necessitates a highjump upgrade) keeps the player’s potential paths small, and again lessens the possibility of getting lost or confused.

Not to say that the entire game is hellishly straightforward; it just finds a wonderful middle ground between indulging the player’s lust for exploration and discovery and confusing the hell out of him with too many potential routes. 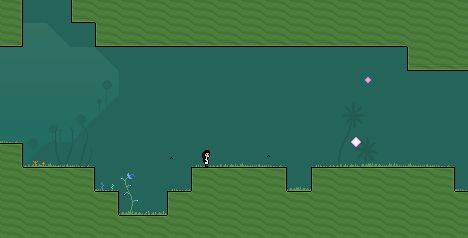 Aesthetically, the game is beautiful. The graphics are very low-rez — these screenshots are more or less the game screen’s actual size –but they have a minimal, graceful quality to them which I find inexplicably appealing. The music is also ethereally beautiful, changing appropriately with every new location. In a game so focused on relaxation and interestingness rather than hellishly difficult platforming or action (though there is a lot more action-y platforming in Stories than in the original), it’s important that the game just be pleasant to look and listen to. You’ll want to spend time in the world of Knytt Stories simply because it’s a sensually pleasing place to be.

I haven’t yet played the official new levels or the user-created ones, but I really appreciate that they exist. The user mapmaker community is surprisingly still active even a year after the game’s release, and given the incredibly small file sizes, you could hypothetically be playing both official and user-created levels for months after the initial Knytt Stories download. What more could you want from a friendly indie time-waster than a thriving mod community? 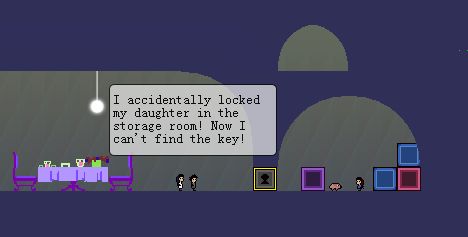