You can play as a zombie or a human and though I’ll hate you for joining a side which will inevitably doom mankind (indeed, on an infinite timeline, the zombies will mathematically have to win), the zombies are just as fun to play as the humans.

And the best part? It only takes five or ten minutes to play each day, so you can come back to it over and over throughout a few months! It’s as pleasant as a regular MMO, with all that “nnng gotta level up I need to find phatter lewt this is so awesome” vibe but without the necessity of investing hours upon hours into the gameplay.

Also, there are zombies.

Play it here, or hit the jump for more.

To explain what I mean when I say that Urban Dead is “sorta text-based,” consider that the average Urban Dead screenshot looks like this: 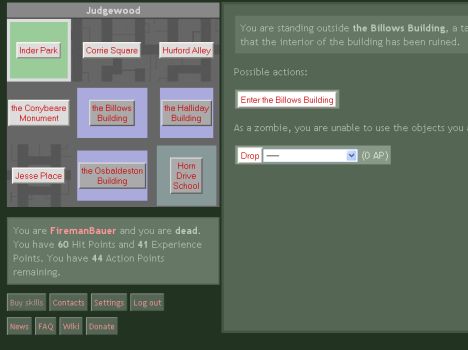 That big area in the top left is the city map. Urban Dead takes place in a 100 x 100 grid, each section of the grid representing a location. Your view is always limited to a 3×3 survey of your surrounding locations. So, it’s sort of text-based in that you’re not looking at pictures of buildings, but at the same time you won’t have to be jotting down maps like you’d have to if you found a maze in Zork or something. You’ll never feel like you don’t know where you are or where you’re going, which is much more than I can say for most text-based games.

On your first time through the game (when it asks you to choose your class, pick Fireman — trust me, it’ll make it a lot easier to level up and you can unlock all the skills no matter which class you initially choose), you may find the world initially overwhelming. This is a good thing.

Quite simply, there’s a lot of ground to cover, a lot of strategies to uncover (if a building is “very strongly barricaded” and there’s a lot of people inside, don’t barricade it any further), and all sorts of things to do. Some people join big human or zombie groups and perform raids on the opposing sides. Some humans actually act as spies for the zombie side. Some players have deemed themselves Bounty Hunters of the Wastlands, and endeavor to roam the entire map, killing trolls and griefers who have been publicly complained about in the official wiki.

Admittedly, your desire to continue playing will probably be somewhat diminished after you fully level up your human or zombie character, but that takes a long time — at least a month or two. And even after that, you can always get revived (if you’re a zombie) or jump out of a building (if you’re a human) and experience how the other half lives.

And besides, nothing can compare to the odd feeling of minimalist satisfaction one experiences from spending twenty action points bludgeoning a (player-controlled) zombie to death, finally being rewarded with the message, “you attack the zombie for five damage. It dies.” It’s indescribably fun to wipe out hordes of the text-based undead after spending so many action points foraging for weapons and items, but hell if I didn’t just log back into my account a few days ago just to try out temporary (un)life as a zombie.

Anyway, play it. It’s really easy to get into, takes very little time to play each day (every action takes a single action point, you can have 50 action points max, and the action points refill at the rate of one every half hour), and it’s damned pleasantly addicting for the first month or so. Try it.