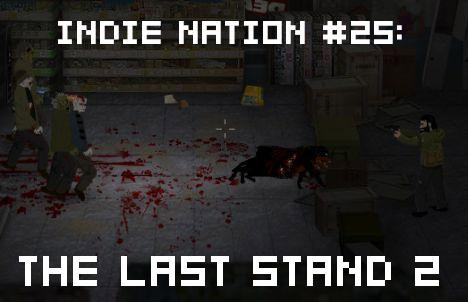 I love zombies. More than you do. I keep a copy of The Zombie Survival Guide by my bed just in case I ever need to get at it in a hurry, I’ve watched Dawn of the Dead more times than I can count, and my ultimate dream is to make a zombie movie (or game) starring my sister and Nathan Fillion.

Although, perhaps it’s dishonest to say that I actually love zombies. I despise zombies. Everything about their shambling, their smell, and their mindless instinct to kill instills a deep and murderous hatred in me. I don’t love zombies. I love killing zombies.

With that in mind, The Last Stand 2, however inappropriately named, is one of my favorite time-wasting flash games. It combines the way-too-popular castle defense genre with the simple pleasures of blasting zombies and gathering supplies for a cross-country trip to safety. It’s not the best indie zombie game (zindie game?) I’ve ever played — I’m saving an Indie Nation on that one for a rainy day —  but it’s awfully damn fun.

Go here and play it, or hit the jump as I explain more about my disgust for the undead

I honestly think that films like Fido, or Land of the Dead, or games like Stubbs the Zombie are goddamn abominations. There is only one opinion on zombies mankind should ever, ever have, and zombie-hugging pro-undead propaganda like Stubbs is only going to cost us more and more lives once the undead plague begins to spread. Zombies should be killed immediately, without hesitation and without prejudice.

This is why The Last Stand 2 is so fun. It doesn’t just deliver on a gameplay scale, but is actively training its players for the impending apocalypse.

The Last Stand was a fun, if simplistic game: you shot zombies during the day, searched for extra weapons and survivors during the night, and after twenty days or so the game ended. The essential mechanics haven’t really changed for the sequel, but the implementation of an ultimate goal gives the game a palpable sense of urgency the first game lacked.

Rather than just hunkering down in one area and building your base up to impenetrable strength, you have to keep moving in TLS2. You can take time repairing your barricades or trying to find guns, yeah, but that’ll be time you could have spent getting supplies together to travel to the next town. If you don’t make it to Union City within 40 days, it doesn’t matter how well you’ve defended your castle: you’re dead.

The great graphics and satisfyingly fast-paced gameplay from the first game remain intact, but now they’re wrapped around a much more satisfying road trip structure. Admittedly, it’s kind of disappointing to reach Union City and have that simply be the end of the game (I was really hoping for a huge, epic shootout with an incredibly large number of ghouls — I guess I’ll have to wait for The Last Stand 3), but it’s much more fun, and makes for much more strategic gameplay, when you have to balance the desire for immediate strength versus your longterm goal of reaching Union City.

Additionally, I’ve always liked the simple, hybridized gameplay of the actual battles in the Last Stand series. It’s your typical castle defense game where you only have to defend enemies coming from one direction, but the varying speeds of the enemies and weapons, mixed with the unusual upgrading system (unlike regular castle defense games, you don’t get experience points or anything) and the fact that you’re killing friggin’ zombies makes the whole shebang much more entertaining than it really has any right to be.

Finally, it has to be said that The Last Stand 2 is damned pretty, for a flash game. The death animations are much more detailed than you’d expect from something found on ArmorGames.com, and the whole affair seems appropriately grimy. If there were ever a 2D version of Left 4 Dead, it’d probably look a hell of a lot like this.

Anyway, enjoy the game. It’s not as unusual or deep as many of the games I tend to highlight, but it’s harmless fun that supports the merciless destruction of the undead armies. I can’t not support it.