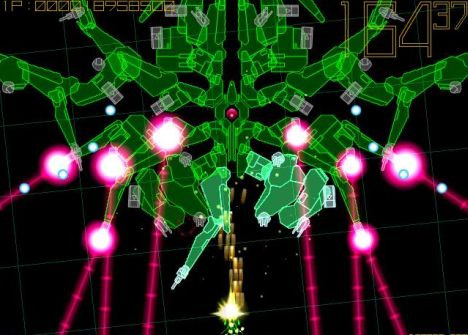 This week, TIGSource.com announced the winners of their Procedural Generation competition, wherein contestants had to create games based around some degree of procedural generation.

You should definitely check them out, as the winners are pretty damned interesting. I won’t be highlighting them on this week’s Indie Nation, however:  but the competition reminded me of a game that I’ve been wanting to highlight for quite some time, that literally everyone should play at least once: Warning Forever.

While many of the TIGSource competition games treat “procedural generation” and “randomness” as synonyms, Warning Forever is a true procedurally-generated game (and a really, really badass shmup, to boot).

You can just play the game and figure out why for yourself, or hit the jump as I take away all the magic.

Warning Forever, as you’ll hopefully figure out within a few seconds of playing, consists of a series of progressively more complex and difficult boss fights. Even not knowing about the procedural generation, the game is still one of the best shmups I’ve ever played: the best part of most shmups are usually the boss fights, and Warning Forever simply cuts through all the BS. It’s awesome/epic fight after awesome-epic fight, and it’s really damned satisfying.

What’s even more satisfying, however, is the process by which the bosses are constructed.

During each boss fight, the game calculates just how you fight, and compensates for the next boss fight. If, for instance, you tend to defeat bosses by blowing up their forward defenses first, then the next boss will have even more forward defenses to compensate and make the battle harder for you. If you try to take out their rear first, then the rear will have more defenses next time, and so on.

This has two immediate changes on the gameplay. Firstly, it makes each boss fight a heck of a lot more difficult than if all the enemies had been pre-programmed; each boss is specifically tailored to expose your achilles’ heel.

Secondly, once you realize the procedural generation at work, it forces you to play in a totally different way. Knowing that the next boss will reinforce whichever area you decide to attack first, you’ll find yourself attacking areas you wouldn’t normally bother with, just to “trick” the game into reinforcing irrelvant areas of the boss. I tend to attack the fronts of bosses, for example, so I’ll switch things up and start by blowing up the rear; that way, the rear area gets more reinforced, and I can sort-of retain my prefered playing style for a little while until the game catches on.

Once you understand how the procedural generation works, you’re not just playing a regular reflex-based shmup; you’re also engaging in a duel with the game’s internal AI, trying to trick it into working to your advantage. A shmup becomes a sort of shmup-puzzler.

Again, check out the TIGSource winners, but if you haven’t played Warning Forever, be sure to check it out as well. It’s one of the most enjoyable free indie games ever, and one of the best examples of procedural generation available today.