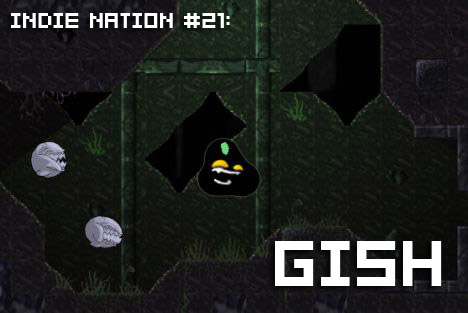 I honestly dunno what prompted my desire to replay and write about Gish. The game is several years old, hasn’t experienced a significant price drop, and no recent news has been released about the sequel. I just had one of those cravings — you know the kind I mean — where you wake up with the insatiable need to play a game whose protagonist is an amorphous blob of black goop.

If you haven’t played Gish already, then you really need to check out the demo, or purchase it from the same page. For the sake of summary, Gish is an action-platformer-puzzle game where you play the titular blob of goo, who can only move and interact with the environment by compressing himself, sticking to things, and sliding around.

As always, I’ll just leave it at that where the home page is concerned; best to try out the demo and judge for yourself, if you’re so inclined. After the jump, however, you’ll find my opinion on why this game is so good (and more than worth $10, on Steam).

I know I’ve used this analogy before with a different indie game, so forgive me if it sounds familiar, but I cannot for the life of me remember when or why I used it.

Anyway, Gish is like Portal. I know that sounds ridiculous, but look at the main gameplay ideas behind Portal: it’s about using a single mechanic, initially unfamiliar to the player, and building an entire game around that mechanic. The mechanic is versatile enough that it can allow for puzzle, exploration, and action gameplay.

The mechanic is intertwined with movement, progression, and literally every aspect of the game — were the mechanic removed, the game would no longer exist, much less be any fun. Complication upon complication are added onto this central game mechanic, as new things are constantly shown to the player while still being tied to the original conceit.

In Portal, this mechanic was the portal gun. In Gish, the mechanic is Gish’s ability (or lack thereof) to traverse his environment.

Gish can make himself sticky, slippery, or heavy, and he can jump. That’s it. He comes with all these abilities at the very beginning of the game; the main conflict of Gish is not between the player and the puzzles, but between the player and Gish himself. The “puzzles” in Gish are usually straightforward, usually no more complicated than “pull this lever to open this door.” The player knows exactly what needs to be done to solve these puzzles, but the difficulty is figuring out how to manipulate Gish to get the stuff done.

This sounds like a potential recipe for disaster (who would want to spend the entirety of a game essentially fighting their avatar?), but the physics and controls are so damned smooth and believable that rather than feeling unfair or combative, every second of Gish feels like a learning experience. Very little is revealed to the player through the first level tutorial, so the player is constantly learning more about what Gish can do with an incredibly limited number of abilities.

While the first-time player will probably take a good few minutes to get through each level, by the time they’ve hit the halfway mark they’ll be speeding through the same sorts of puzzles and obstacles with effortless dexterity. Not because the player has gained some new ability or deus ex machina, but simply because the player gets better at controlling Gish.

I know that sounds like a no-brainer — of course you get better at a game the more you play it — but Gish derives most of its player satisfaction from constantly increasing the player’s awareness of Gish’s capabilities, and their own ability to adequately control him.

If that all sounds a little pretentious and abstract, then just know that Gish is a wonderfully clever, genre-bending side-scroller that’s so good I still wanted to talk about it four years after its release. Try the demo, at least; the $20 tag might seem a bit high given the game’s age, but Gish‘s length, quality, and multiplayer options more than make up for the cost.