Tiff announced the release of Pixeljam’s latest game earlier this week, and I’m here to echo her sentiments:

However, if you need more convincing, or an in-depth critique of the game itself, that’s why I’m here: to ruin a pure game experience by pointing out every individual strength and flaw, spending more time alternately praising and condemning the game than actually playing it.

So, hit the jump if you’re into that sort of thing.

Dino Run, like so many other Pixeljam games, falls under the “neo-retro” category of games that give the cast of RetroForceGO! seven-hour erections. Certain aspects of its gameplay are totally familiar, while others are either borrowed from modern gaming or completely new.

The act of running from left to right to escape a Huge Ugly Thing of Doom will be familiar to anyone who played more than a few ’90s side-scrollers; sooner or later, the player would eventually be forced into an area where the camera moved of its own volition as the player had to run from some evil object coming from the left side of the screen. That sort of “chase” gameplay is instantly recognizable, and it’s where Dino Run starts from.

That’s not where it ends, however. Unlike what you might find in, say, the boulder level in Indiana Jones’ Greatest Adventures, the camera stays with the player’s Dino throughout the entire game. This doesn’t sound like a big deal, of course, until you run for five minutes without seeing hide nor hair of the Doom Wave, only to stop your horizontal movement while climbing a mountain and hear it slowly creep in from the left side of the screen. 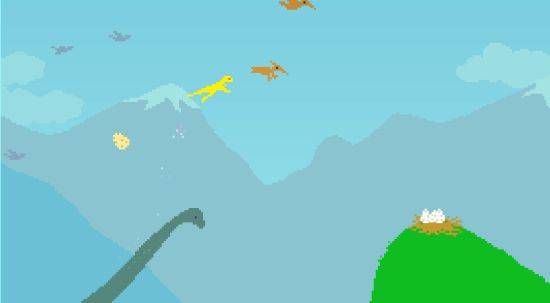 This is when Dino Run is at its best: when the Doom Wave is mere inches behind you, as the music slowly becomes replaced with the bass rumble of impending extinction and the graphics become silhouettes of their former selves, “nerve-racking” is the only word that comes to mind. When you’re only a few feet from death, Dino Wave is an incredibly tense, rewarding experience. Slowly succumbing to the black wave of death, only to hit the boost key and zip right out of danger (known as “doom surfing”) is exhilarating as hell, and really gives the rest of the game its emotional kick.  It’s much more exciting to hitch a ride with a pterodactyl or descend into a hollowed-out volcano when you know that hot, black death is only a few moments’ hesitation away.

Thankfully, you’ll also have a lot of pretty awesome stuff to look at as you escape extinction. Rich Grillotti has really outdone himself in the art department. It’s kind of difficult to explain without seeing the game in action, but every character, background, and event is rendered with such gorgeous, minimalistic-but-not detail that it becomes pretty difficult not to be amazed by some of the things you’ll see throughout the game. Put simply: Dino Run includes some of the most gorgeous pixel art ever, and the game is a hell of a lot more fun because of it.

It’s not perfect, however. Exhilarating as Dino Run can be, one rather significant design choice prevents it from reaching its maximum fun factor — the levelling system. 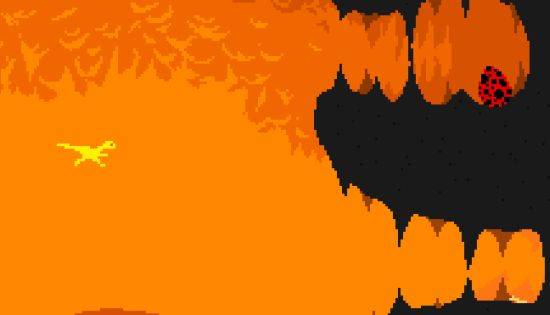 As your chosen dinosaur (customizable with hats and costumes for those generous players who donate to Pixeljam — dig deep, and tell your friends) rushes through the landscape, he/she/it can eat critters or collect eggs to gain DNA points, which can be used as currency to purchase upgrades to the dino’s speed, jumping ability, and other statistics. In theory, this sounds pretty awesome, save for two things: the necessary act of accumulating DNA points is incredibly time-consuming, and the emphasis on upgrading can invalidate difficulty levels and multiplayer matches.

The player gets one DNA point for every eight eggs collected or creatures eaten, while the stat upgrades can cost up to 200 DNA points at the maximum level. A determined player can upgrade their dino to a noteworthy level after a few hours of sustained play, but really — as fun as the chase gameplay is, I cannot imagine too many players willing to put hours upon hours of play into the same half-dozen levels on the same difficulty setting.

And you almost certainly will be playing on the same difficulty level, if only because the higher settings (“hard” and “insane”) are almost completely impossible without significant character upgrades. Technique is meant to be a big part of surviving Dino Run, but all the technique in the world won’t get your level one dino through the campaign on “hard” difficulty. All the upgrading the player has to go through in order to equalize the difficulty and the “ohshitthedoomwaveiscomingRUN OHMYGODRUN” factor kind of kills the otherwise blistering pace of the game; the player is literally forced to grind simply to increase the challenge for themselves.

Since the player’s singleplayer dino also carries over into the online multiplayer races, this means that a levelled up dino will always beat a regular one. If, say, Tiff and I were to enter a multiplayer game, she with a starting level dino and me with my speed upgraded three times over, then I would absolutely crush her. Regardless of her cute little dino hats, and all her adorable attempts to jump onto pterodactyls and over stegosauruses, I’ll still make it to the finish line roughly thirty seconds before she does.

Now, will I consider that a win? Yes. Will I message her on Google Talk bragging about how much better gamer and a person I am? Yes. The next time I see her, will I punch her in the mouth before thrusting my arms in the air and reciting the dinosaur rap from the Super Mario Bros. movie word for word? Absolutely. In my heart of hearts, however, I will know that we didn’t really have a fair race. In order to have a balanced multiplayer match, both combatants will either have to have more or less equal characters, or create totally new dinos just to even the playing field.

Even with those flaws in mind, Dino Run is still a hell of a good time — it’s intense, beautiful, and, when properly balanced, a great mutliplayer experience.  Besides, it’s free. That is, unless you count the awesome additional hats and costumes you’ll unlock by donating to the Pixeljam team, who were awesome enough to release the game for nothing in the first place.