I’m going to take a wild guess: a significant number of you may have seen Gamma Bros, and maybe even played it for a few minutes, but never finished it. I do not necessarily blame you: Gamma Bros is quiet, difficult, and pretty lengthy for what one might immediately assume to be a simple, flash-based time waster.

Still, it needs to be said — if you haven’t played Gamma Bros all the way to the end, you haven’t experienced what makes the game so damned special.

Believe it or not, this simple, Robotron-esque space shooter contains one of the most simple, subtle, and clever methods of developing player/character empathy I’ve ever witnessed. I realize it sounds like I’m talking out my ass, but just play the game all the way to the end (available for Macs, too!), and you’ll hopefully see what I mean.

Or, just hit the jump and read on as I explain everything to you and essentially ruin all the magic.

Gamma Bros includes two main design choices that simultaneously make it rather difficult, but also rather effective in forcing the player to care about the titular character. Firstly, it is very difficult; secondly, it is very long. And, at least where replay value is concerned, it’s difficult because it’s long.

Rather than filling its significant running time (30 minutes? 45? An hour?) with nonstop, balls-to-the-wall shooting action, Gamma Bros takes a much slower, more deliberate pace. You fight enemies in waves, yet the enemies don’t get frighteningly aggressive until the last fourth of the game; you spend time blowing up ships to get money and buy upgrades, yet you still spend a comparatively large amount of time just drifting around in space periodically shooting stuff, without even musical accompaniment of any sort. With the shooting mechanics being so tight, and the music being so great, why the slow pace? Why the calming, almost meditative pace for the first 2/3 of the game? 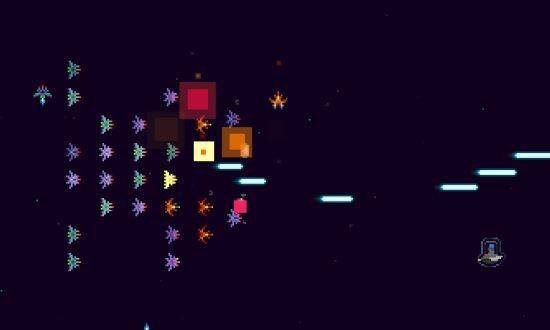 In Shadow of the Colossus, the protagonist (I’m not calling him “Wander”) and his horse, Agro, spend quite a bit of time riding through the Forbidden Lands without any enemies to fight. The player and the horse explore a completely empty, desolate world together — and since they aren’t technically doing anything, outside of exploring and travelling, the player develops a strong, emotional connection to the horse. When the player isn’t being distracted by swordfights and explosions every twenty seconds, it becomes much easier to empathize with the gameworld and its characters; when Agro finally helps you out during a fight, the moment is much more striking and effective after spending so much “alone time” with him.

That’s pretty much what Gamma Bros does. I’ll get into the lives system and player empathy with each brother in a second, but essentially, the game is very long and very calm because if it wasn’t, you wouldn’t give a rat’s ass about either Gamma brother. Once you’ve spent a great deal of time with them, however, alternately fighting baddies and floating in space, you begin to identify with them, and subconsciously grow to give a sh*t what happens to them. You simply spend so much time with the Gamma Bros that you can’t help but care, at least a little, about what happens to them.

Enter the huge difficulty spike near the last third of the game.

The first 2/3 of Gamma Bros is about getting you comfortable with the mechanics, familiarizing yourself with the characters, and, through powerup purchases, making you feel like an unstoppable badass. The last third of the game exists to put all those expectations to the test. By a certain point in the game, the player suddenly has to face an obscene number of bad guys with incredibly powerful weapons, flying in formations seemingly designed to screw the player up as much as possible. 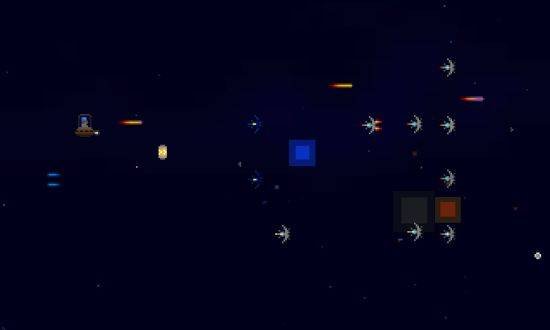 The player will panic as he’s surrounded on all sides by little orb ships, then panic even more when his one escape route is blocked by absurdly powerful rocket troopers. The last third of the game is meant to scare the player out of his comfort zone: your powerups alone are no longer enough to carry you through the game, the previously calm tone is done with forever, and your emotional connection to the protagonists is about to be tested, hardcore.

These design choices make the game as emotionally effective as it is, but they can also distance first-time players; given its minimal pixel art and our natural expectations where online flash games are concerned, the average player might assume that Gamma Bros will be an action-packed space shooter which will last no longer than ten minutes, tops. Gamma Bros is none of these things, of course, and it’s a much better game for it, but casual shooter junkies looking for a quick fix might get bored and quit before they get to the really good stuff.

I have to personally admit that I only finished Gamma Bros for the first time a couple weeks ago, thanks mainly to Jon Mak’s endorsement of the game at GDC.. When I say that your average gamer probably won’t make it to the end due to boredom and a misunderstanding of the game’s goals, I’m not dumping on average gamers; I know from experience, because that’s exactly how I reacted the first time I picked up the game.

Still, whether you feel these choices were mistakes or strokes of genius, however, you’ve got to admit that the lives system is absolutely brilliant. The player only has two lives at any given time: Zap and Buzz*’s ships have pretty big health meters, and even after the ships blow up, and each brother can float around for a while and take two more hits before dying or tagging the other brother in, but that’s it. If a brother dies, he’s dead; there are no respawns, no continues. You’ve got Zap and Buzz, and that’s it, so you better be really goddamned careful with them. 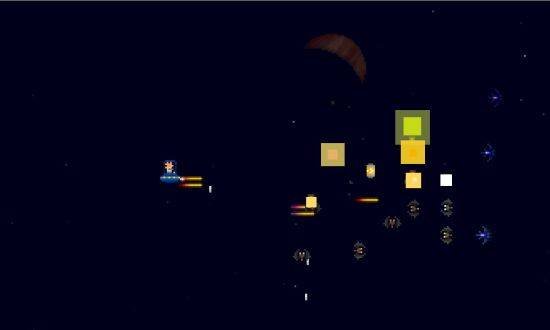 The importance of this mechanic cannot be overstated. Since death is permanent, the game is not only much more suspenseful in the later levels (I dare anyone not to freak out when a brother’s ship blows up and he’s just left flying around in the void, merely a single hit away from permanent death), but also a lot more emotional. Whether the player wants to or not, he’s come to care about the brothers by the last third of the game; when one of them is taken after twenty or thirty minutes of sustained play, it makes for a sad, disappointing moment. Despite the fact that each brother is only made up of about 18 pixels, it truly hurts to see one of them die. Gamma Bros‘ gameplay carries a much greater weight once you realize that where Buzz and Zap are concerned, there are no do-overs. If you want these guys to live to see the end of the game, you better be at your best.

But even then, this is all just rhetoric and conjecture. Who cares if you empathize with the Gamma Bros because of the lives system, or the slow pace? What’s the point of building empathy for them if the game never puts that empathy to the test?

This is, of course, where the ending comes into play. (You still have the opportunity to play the game from beginning to end. This is your last chance to do so without having anything really significant spoiled for you.) 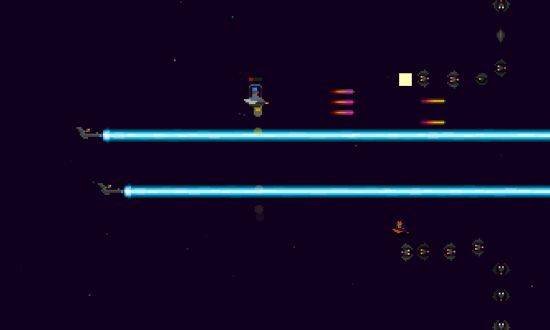 So, the ending. After finally surviving the last third of the game, after getting all the upgrades and fighting your way past rocketmen and orbs, all of whom adhere to more or less strict formations, you meet the final boss. The evil, floating skull thing. The Deathhead.

The Deathhead is unlike anything you’ve faced in the game before; his attacks are based on randomness rather than structure, he spawns enemies everytime he’s hit, and a lot of his attacks are instadeath. Oh, and when you meet him, he strips you of all your weapon upgrades.

Suddenly, the player feels powerless. Suddenly, and so close to the end, it looks like the player might lose and the Gamma Bros might die and all the work and time you put into the game will end right here, right now.

1. Both brothers die. The game starts over, and all your work is for nothing. It is tragic, but potentially strengthens your resolve to get back on the horse and try again.

2. You beat the Deathhead with both brothers alive. After a wonderful celebratory sequence where the Gamma Bros theme triumphantly plays as the other brother flies and shoots randomly in all different directions (this is as close to dancing as one can get in a spaceship), the two descend to their homes as the digital theme quietly switches to a sweeter acoustic version. They exit their ships, embrace their wives, and wave to one another. Another day of work comes to a close, and all is well. This is incredibly satisfying.

3. One brother dies, but you beat the Deathhead. This is what happened to me the first time I met the Deathhead, and I’ll never forget how it made me felt. After the Deathhead explodes, the music goes through the same steps as it did when both brothers live through the boss — triumphant digital theme, then quiet acoustic theme — only this time, I was going through it alone. 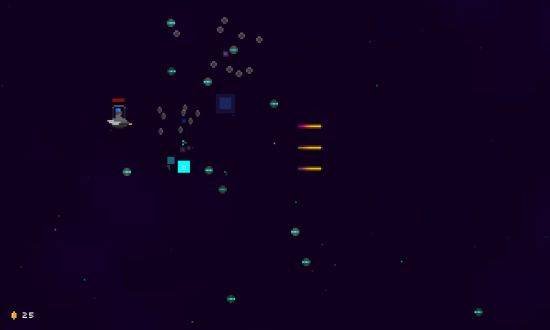 One of the brothers was dead, and as the remaining brother’s spaceship descended onto the landing platform, I couldn’t help but notice the vacant one beside it. He lived, but the other brother didn’t; the living brother’s wife and pets came out to meet him happily, but the dead brother’s family stayed indoors to mourn. An empty yard, an empty landing platform. A minimalistic ending to a minimalistic game. But so effective.

I’d “won,” technically, but it felt like I’d done so at a significant cost. I felt a legitimate sense of loss, of sadness; without knowing it, I’d come to care about the brothers, and to see one of them make it through alive while the other stayed dead really unsettled me, but in a good way.

I wanted to restart the game and save the other brother, so I did. But even after seeing the “best” ending, I still have to say that the “not-quite-best” ending is my favorite; it inspired a really profound reaction of triumph and failure, of celebration and sadness.

Like I said, you probably should just play the game through on your own and see it for yourself, though if you read all this without having done it anyway, you’ve already ruined it. I realize how ludicrous it sounds to ascribe such emotional depth and effectiveness to what is essentially a pixel art space shooter, but I make no apologies: Gamma Bros is a damned good game, and unless you’ve played it from beginning to end yourself, you’ll never understand just how friggin’ clever it is.

*Not having read the short and kinda-irrelevant prologue to the game, I initially assumed I was supposed to give the brothers names of my own choosing — after some deliberation, I settled on Clancy and Arturo, if only so when one of them died, I could shake my fists at the heavens and yell “NO, ARTUROOOOOOOOOOOOOO!”