“Newly wed to Shunsuke, eldest son of the historied Tsubakikoji family, Reiko suffers the loss of her husband the very next day. Under the cruel and unceasing mockery of the aristocrats, Reiko’s common-born blood sets to boil.

Clutching the rose Shunsuke gave her to her bosom, Reiko issues a defiant challenge to the house’ ‘I am the widow of the eldest son of the Tsubakikoji family. This house is mine!’ …This is the elegant art of feminine conflict.”

Such is the backstory behind Rose & Camellia by Nigoro, one of the most unusually entertaining flash games I’ve ever played. The entire game is basically one big bitch-slapping fest, as the player uses the mouse to smack and evade the evil, aristocratic women who would rob Reiko of her inheritance. Rose & Camellia consists of hilariously lowbrow gameplay wrapped around a uniquely highbrow plot — in other words, you should play it right now.

Or, as always, hit the jump and listen to me spooge about the rest of the game.

As said before the jump, my favorite thing about R&C is the hilarious dichotomy between the straight-faced Jane Eyre-esque narrative (the sort we never, ever see in videogames) and the out-and-out ridiculousness of the bitchslapping gameplay. For every serious moment the game has to offer, there’s an equally absurd one to go with it: each character learns to respect Reiko after she defeats them, for instance, but the characters also get progressively less realistic (the final boss is literally a hulking, Jabba the Hutt-esque demon thing). 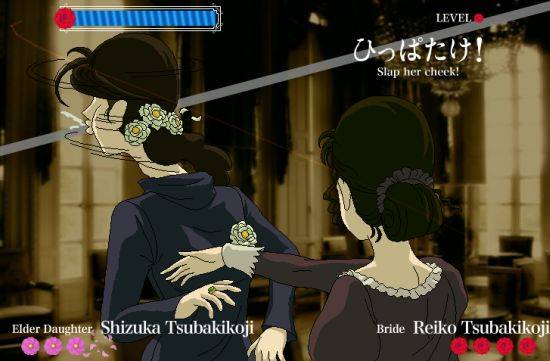 The gameplay itself is actually really fun, in a weird way. It really just boils down to clicking one of two buttons, “attack” or “evade,” at a given time, and then whipping the mouse as fast as possible against the face of the enemy (to bitchslap) or Reiko’s back (to evade). It’s a very simple input scheme, but the reflexes it requires, and the visceral fun of speedily moving your mouse across some uptight bitches’ faces is impossible to overstate.

Additionally, the game’s intentional adherence to some age-old gameplay cliches make the proceedings even funnier. The HUD, for instance, is way busier than it needs to be — I don’t need to see the characters’ names, nor the constant warnings that “SHE’S GOING TO SLAP YOU,” nor the level I’m on. Yet the fact that these things are there, the fact that the world of the Japanese videogame constantly intrudes on the graceful visuals and almost-serious plot, just comprises another of those wonderful little dichotomies that make Rose & Camellia so special. Also, the animations for critical hits are high-larious.

Let it be known that Rose and Camellia is one of the most difficult games to recommend to a friend: just summarizing the gameplay is an exercise in utter ridiculousness.

“So, you play this chick who’s been screwed out of her inheritance, and she has to fight her in-laws to get the house.”

“–By slapping them, yeah. The whole game is a huge slapfighting tournament. A bitch-smacking simulator.”

“I don’t think we can be friends anymore.”

Be careful of this, should you ever decide to recommend Rose and Camellia to your friends. 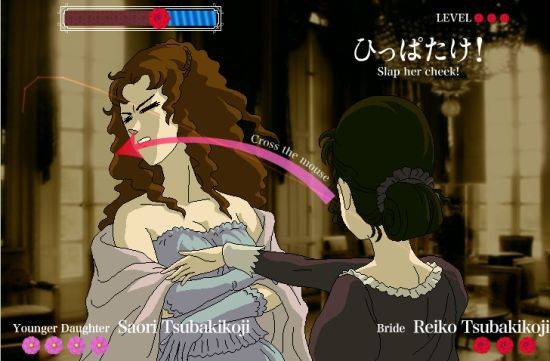 Nigoro, the game’s creator (I dunno if that’s a single person using an alias, or a group) has created some other games, all of them interesting but none as hilariously fun as R&C. Lonely House-Moving is pretty cute even if the controls are pretty loose, Space Capstar II is basically just Lunar Lander with a hilariously-named protagonist, and Death Village is a cool Lemmings-esque puzzle game. None of them give players the ability to mouse-spank an elderly, teleporting hag, however, which makes them comparatively harder to enjoy.

In case you’ve been reading this far just to decide whether or not to play Rose & Camellia, you’ve got no excuse not to: it’s free, it’s online, it’s flash, it’s fun, and it’s funny as hell. Summarized, the game is FOFFFAH. Go play it.

Thanks to Tiff’s girl gamer post, I’m now trying to think of Rose & Camellia in terms of gender roles, just for fun. Does it empower its female characters by giving them strength, determination, and character while still allowing them to keep their clothes on?

Or is it mildly sexist because all the characters fight via the (historically effeminate) act of slapping each other?

I leave the question to you.