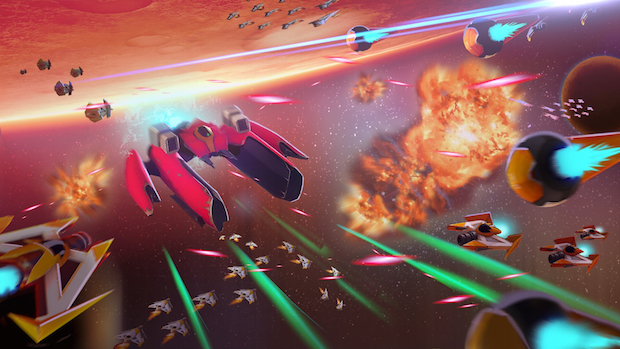 [Update: Kickstarter has sent over an official comment, courtesy of  Director of Communications David Gallagher.

“We work hard to keep Kickstarter a safe and trusted platform. Our Integrity Team actively monitors the system with a range of tools, and acts on reports from our community. We don’t tolerate abuse of our system, and when we identify users who are acting in bad faith, we don’t hesitate to take action. We’ve suspended this user’s account and are canceling any pledges they’ve made.”

In the meantime, 2Awesome Studio is looking for a way to fix things with Kickstarter. According to their Twitter, the team is waiting on an official reply from the crowdfunding service]

In the wake of Kickstarter smash hits like Yooka-Laylee and Bloodstained: Ritual of the Night, a failure hits that much harder. Such is the tale of Dimension Drive, a shoot-’em-up/puzzler being developed by a small team in the Netherlands known as 2Awesome Studio. With mere hours before the end of its campaign, a backer known as Jonathan pledged 7,000 euros, putting the game just over the funding goal of 30,000 euros. The 2Awesome team was understandably ecstatic.

Unfortunately, that feeling of elation didn’t last very long. Kickstarter pulled Jonathan’s pledge 31 minutes before the end of the campaign. Apparently, the sizable donation was “fraudulent.” Alejandro Santiago, lead programmer for 2Awesome Studio, believes the pledge was a cruel joke.

“We were just in the last hours of our Kickstarter campaign, in a live streaming. At some point we got a pledge of 7,000 euros, just the amount that we were missing to reach our goal. We really do not know what exactly happened, it seems to be a troll (we think he was even in our Twitch stream),” Santiago said in an email exchange with Destructoid. “What we know for sure now is that someone made a fraudulent pledge in our campaign, that got removed by the Kickstarter guys 31 min before the end.”

Even on the off chance that Jonathan’s pledge was well-intentioned, Dimension Drive will have to make a second pass through Kickstarter one way or the other. “Honestly speaking it has been a exhausting month for us. We have been working really hard to make our campaign a success, and right now we are speechless, demoralized…(you name it),” Santiago said.

We’ve reached out to Kickstarter for comment and will follow up with the 2Awesome Studio team later in the week on its plans for Dimension Drive.