Sony is rocking the indie scene, helping developers get games on PlayStation systems

Today at GDC there was a panel dedicated to the Vita hosted not by Sony, but veteran Vita developers. Bobby King (The Pinball Arcade), Richard Hogg (Frobisher Says), Brian Provinciano (Retro City Rampage), and Drinkbox’s Chris Harvey (Guacamelee, Tales From Space: Mutant Blob Attacks) all talked about their experience working with Sony and the Vita on a panel moderated by Gaijin Games’ Alex Neuse, whose Runner2 is making its way to Vita.

The overwhelming opinion was that it’s a great idea for smaller scale developers to work with the system, for a variety of reasons, one of which is that the market isn’t as saturated as iOS and Android app stores. Additionally, it’s easy to work with. Provinciano had his port of Retro City Rampage playable in a single day, while Frobisher Says took eight months to make, from receiving development kits to submitting a final build. Hogg noted that “as a programmer, it [developing for the Nintendo DS] was one of the most miserable periods of my life,” while working on the Vita has been the opposite. One helpful inclusion is access to Sony’s developer support team, members of which the team included in Frobisher’s credits because of their tireless, prompt assistance with getting the game made.

When Neuse asked if the developers plan to put their next games on Vita, all four nodded immediately, replying emphatically in the positive. In fact, King confirmed that FarSight Studios is working on an unannounced new IP for the Vita, an action puzzle game. So, more games are coming. That was evident earlier in the week when Sony was showing off both rad ports (Spelunky, Hot Line Miami) and a bunch of great, new stuff like Luftrausers, Dragon Fantasy: Book II, the aforementioned Guacamelee, and more. I pretty much wanted every game they were showing off for the Vita. The common cross buy option makes them even more enticing. 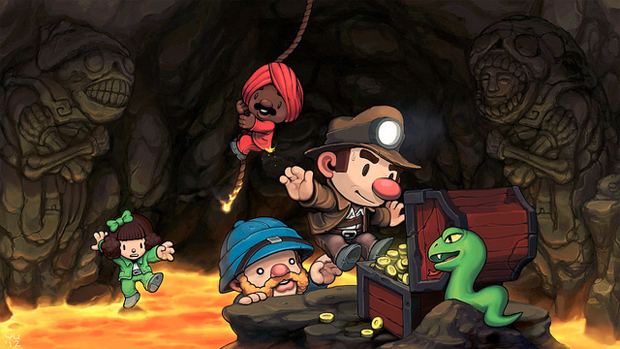 Provinciano likened iOS development to “throwing the dice” — especially for new developers — because of how randomly certain games go viral while other great games toil away under low sales numbers. Hogg added, “At this point, we pretty much gave up working on iOS games.” King, whose Pinball Arcade supports about 20 different Android devices, loved being able to develop for the Vita’s consistent specs and bang out a stalwart 60 frames per second.

A lot of other praise was lavished unto Sony, as well as a suggestion or two for improvement.

Cross buy (buying once to get Vita and PS3 versions of a game) is a huge sales influence. King noted that 67% of Pinball Arcade owners were influenced by cross buy promotion. Meanwhile, Provinciano disclosed that about 85% of Retro City Rampage players crossed the 500k points threshold on Vita, while only around 25% of PC players did so. Speaking of the Vita’s capabilities, Provinciano added “there’s no pressure to add any of these frills if they don’t make sense,” yet displayed an interest in using things like touch screen more in future work.

The overwhelming issue with developing for Sony is one of territories. After testing and certification is finished for the territory you have been working with, another bout of similar operating procedures need to occur in other territories in which releases are planned. It’s a minor issue in light of how good these guys’ experiences seem to have been, but anything to alleviate undue strain is a good thing.

One of the thing’s Hogg said that struck me most is this: “Most of the guys at Sony are pretty well integrated into the indie community. It doesn’t feel like an ‘Ugh, I  have to go sell my game to the publisher’ relationship.” With the aforementioned focus on smaller scale development — Jonathan Blow working on The Witness for PS4 was something Sony chose expressly to highlight in the console’s reveal — Sony just seems to get it. Barriers to entry are lowering and Sony is looking like a real friend to indie developers just as iOS/Android and Steam seem a bit more disinterested (those services only do so much to promote smaller games). And of course few small developers seem to want to work with Microsoft anymore.

For developers interested in working with Sony, check out their cool new self-publishing guide.