I’m sure many of you know that it’s the 20th anniversary of Mega Man. Without this franchise, we would never have “PEW PEW PEW.” Just think about how monumental that would be. It blows your mind.

So, I got to meet up with Leigh “The Kraken Mantis” Alexander, Analog Pidgin, Phist, Pedro “I’m Everywhere” Blandino, EternalDarkWing, and Will from CNET. From some of the photos, you can see that the line wrapped around the block of the 34th street GameStop. Thanks to the ever-handy Destructoid business card, we managed to push our way through the crowd.

What awaited us inside?

There was a great crowd of fans, young and old. Some of them hadn’t even been around for Mega Man 6, but they certainly had a dedication to the franchise. Many clutched every Mega Man game that they had, while others sported copies of Dead Rising. For those that had waited twelve hours to be among the first in line, this was well worth the wait — their hero had arrived.

There he sat — the man who gave us “pew pew pew.” He greeted fans, as well as he could, and autographed whatever they presented him with. If they were daring enough to bring a sketchbook, he would do a drawing of Mega Man for them (oh, those will sell well on eBay, I’m sure).

The staff that was manning the event was the full force of the GameStop’s employees, it seemed, along with a pair of people who represented Capcom, standing in front of Inafune-san’s table, watching like hawks over those who approach the table. While we were there, people were constantly being shuffled through as though this was an assembly line. There was barely any room for breathing for us, as we were clearly interlopers, what with our “press status” and our “cutting the line.” 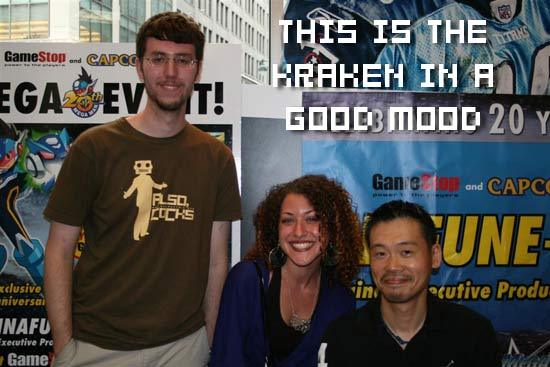 As it was, getting photos with Inafune-san was difficult. In the photos with Leigh, it took three GameStop members to hold down her tentacles from appearing in the picture — that’s why it’s so high up. Me standing up is just a cover for all that.

Pedro managed to squeeze in getting his PSP autographed (the lucky bastard), and we trotted off downstairs, where we encountered the Bioshock statue awaiting us. As you can see from some of the gallery, there was much excitement for this, and we were jeered at by the few people downstairs.

For me, it was nice to finally meet some of the staff who had evaded my presence for so long, and to get random photos with people who are much more important than me in the gaming world. I’ve got to applaud the GameStop staff for not killing themselves while trying to run a store and manage an autograph session at the same time. It certainly must have been hell.

Although, it would have been so much cooler if some zombies broke out.