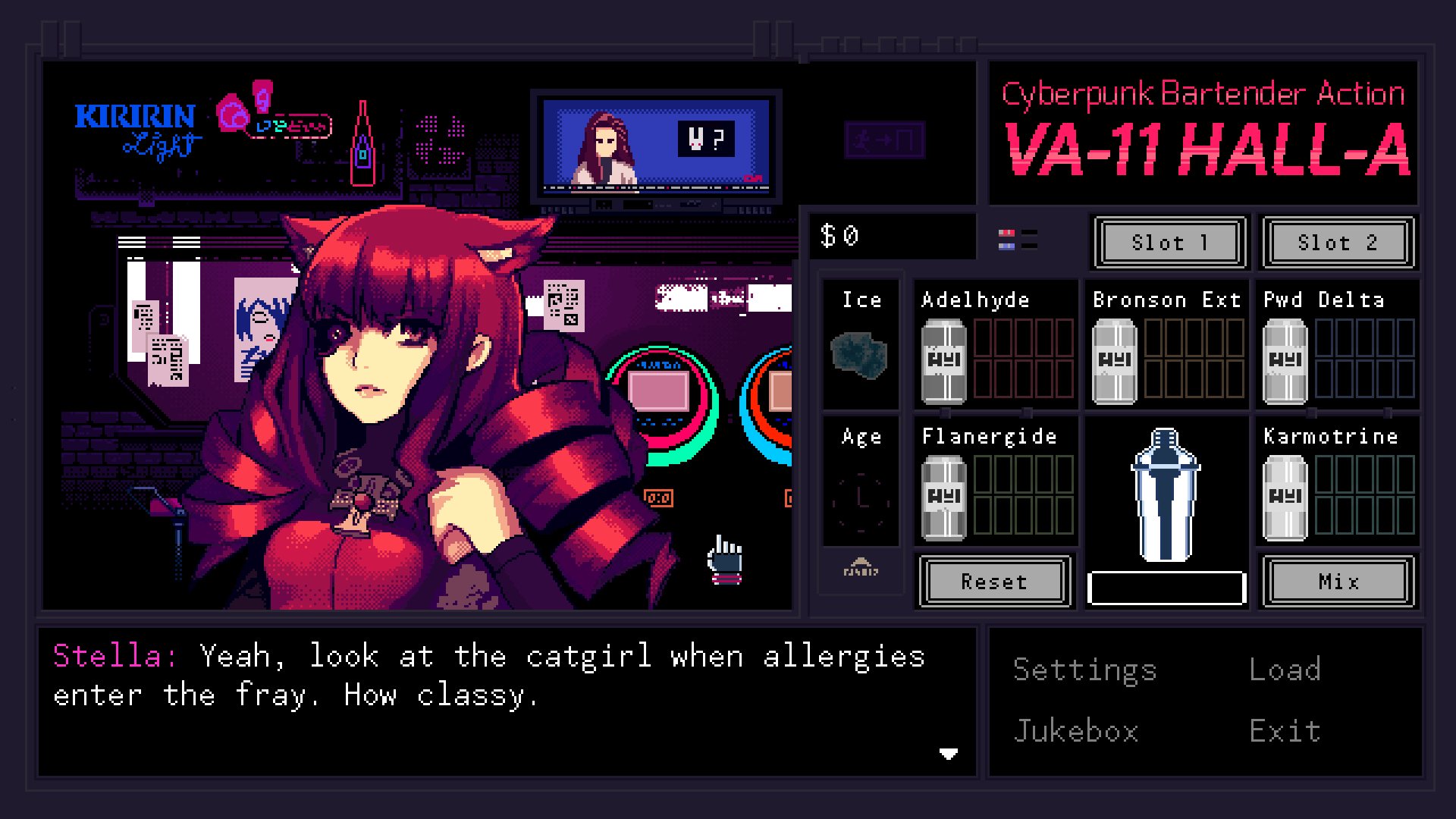 Not the deepest Cheers cut, I know

As someone who doesn’t really gel with alcohol on a physical level — my head aches and then I need to sleep — I’ve never quite experienced the full extent of the bartender/patron relationship. I “understand” it the same way I “understand” why exercise is healthy, you know? There’s an arm and a half’s length between me and this particular reality. Yeah, I’ve watched Cheers (all of it, in order, over the course of a summer) and I can definitely appreciate venting to a sympathetic ear, but it’s not like I get fully turnt on the weekends and chat up the person serving me drinks about, like, my whole deal, man.

Maybe it’s this clinical approach that makes me appreciate “cyberpunk bartending simulator” VA-11 HALL-A all the more. I’ve never been in the role of the drinker, only the person jawing with the drunk. There’s a morose brand of empathy associated with this particular scenario, one ripe for all types of storytelling.

Like, say, a bartending simulator set in the future.

As Destructoid’s foremost Bar Rescue expert, I know way too much about mixology and bar science for someone who doesn’t partake. None of that carried over to VA-11 HALL-A. The game’s cocktail recipes consist entirely of fictitious alcohol brands. None of that really matters, because the gameplay amounts to little more than clicking different colored bottles until you’ve perfectly matched the cookbook. Given enough time, I could absolutely see myself memorizing the respective formulas.

What makes this a “bartending simulator” and not “Cyberpunk, Serve, Delicious” is the character interaction. The demo I was shown at PAX East consisted of a conversation with Streaming-Chan, a young woman who streams her every move to an audience of thousands. (Like the slimmest extension of Periscope, which is why I believe cyberpunk dystopia writers need to step up their game. Real life is beating them to the punch.)

It’s a meaty encounter, for more than one reason. The razor-thin satire doesn’t exactly wear out its welcome (although seeing the in-universe “chat” occasionally pan across the screen does get old) because Streaming-Chan’s gimmick is an extension of her character. Over the course of your short encounter, you come to understand why a person would surrender every ounce of privacy in service of copious money and fame.

However, I found Streaming-Chan’s honesty the most compelling. The way she opens up to the player — in front of her fans, even — confirms my suspicions. VA-11 HALL-A is not a game about serving drinks to people, it’s about bartending. There’s a crucial difference. The ideal bartender is part therapist, part drug dealer, and this game wants to engender sympathy by placing you in that role. You don’t really get to decide what your character says, but whether you listen or not is entirely optional.

VA-11 HALL-A’s character writing, at least based on the 30 or so minutes I spent with the demo, is strong enough to carry the repetitive gameplay. It’s hard to listen to characters you don’t find compelling, but that doesn’t appear to be a problem. Thank God for that. I spend enough time with irritating drunks at college — I don’t need that in my video games too.