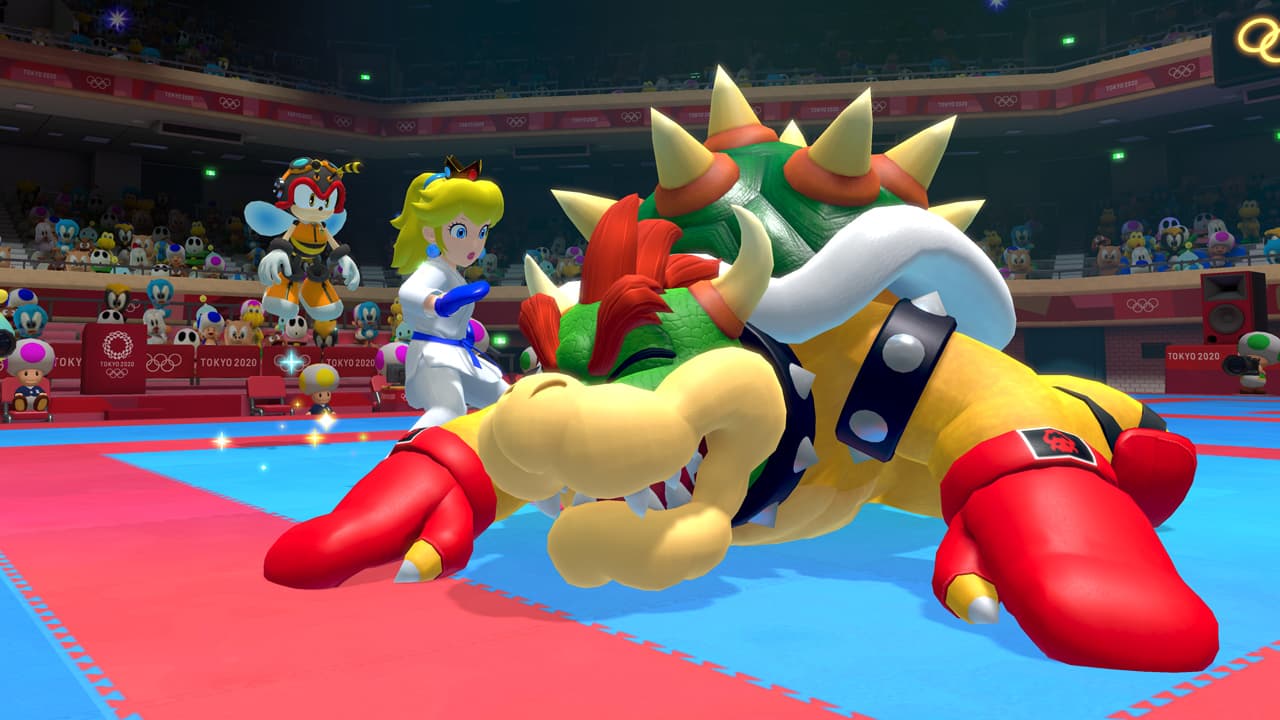 I thought that by this point, I couldn’t be surprised by the Mario and Sonic at the Olympic Games series. Each game has, traditionally, been a mini-game collection that tried too hard to copy the Wii Sports formula with diminishing returns. These titles are very basic, have tons of forced motion controls, and have failed to do anything that plays to the strengths of its titular characters.

Mario and Sonic at the Tokyo 2020 Olympic Games still follows that idea, but it also contains a mini-game based on karate. In it, you can have Mario face-off against Amy Rose, judo throw her to the floor, and chop her throat. The pure spectacle of that moment can’t be understated. As a ’90s child, I’m still a little shocked that these two rivals are in games together, but I never once thought I’d see Nintendo’s plucky plumber don a gui and fiercely flip a lady over his shoulder.

In fact, a lot of dream match-ups can happen here. You can take Peach against Bowser and get revenge for over 30 years of kidnappings. Tails can throw down with Luigi and prove which sidekick is the best. Sonic can square-off with Eggman and get his ass royally beaten. It’s such an odd sight that even after playing multiple rounds in this mode, I still can’t get it out of my head. 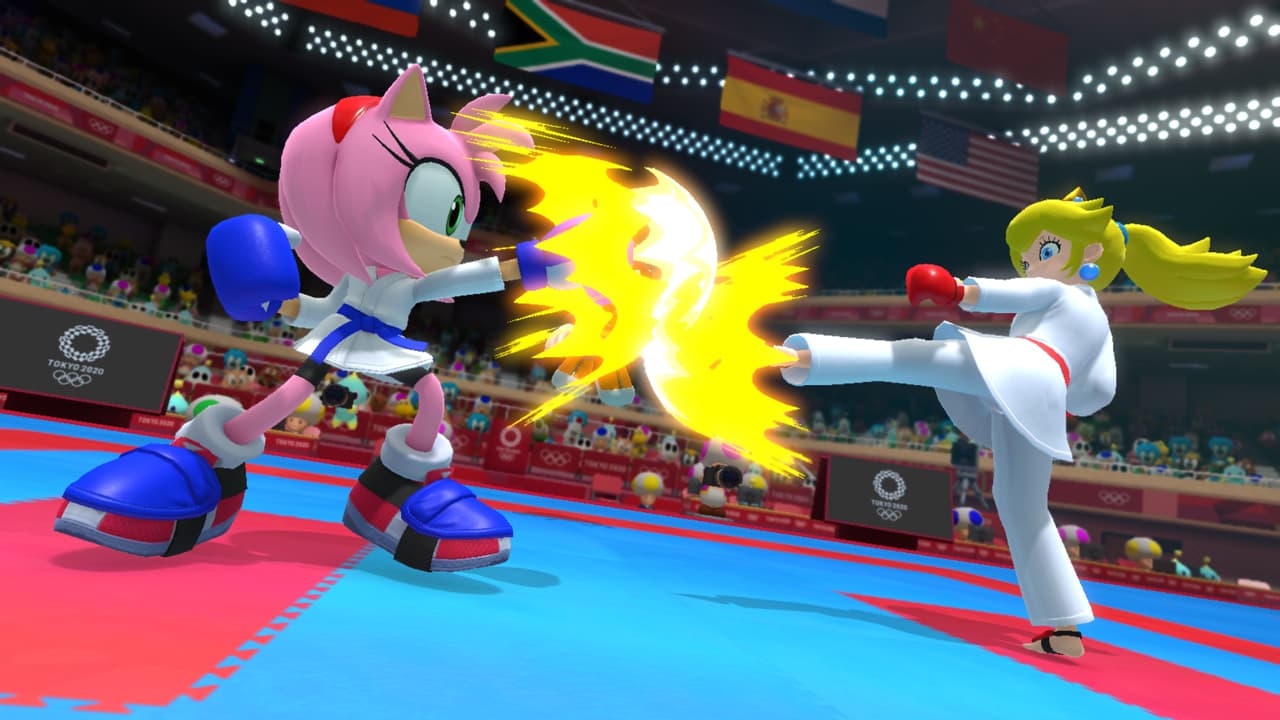 Recovering from the shock of the moment, it turns out Tokyo 2020 is actually not too bad. Instead of forcing players into using gimmicky waggle controls, Sega has smartly taken the Switch’s unique nature into consideration. Since some people prefer to play in handheld mode, there are full button controls available in most titles to accommodate. You don’t need to be playing in portable mode to use them, either, so the motion nonsense of past games is now optional.

The aforementioned Karate played similar to Yie Ar Kung Fu. There are definitely combos you can pull off, but the overall game is simple. You have a punch and kick button, a button for throws, a guard, and you can modify the intensity of your strikes by pushing the stick forward or backward. You won’t be inputting Street Fighter commands for special moves, but you can initiate different strikes based on how you’re maneuvering around the ring.

Skateboarding and surfing were almost exactly the same, minus the setting. Your character seemingly guides themselves and you’ll need to pay attention to visual cues for when to jump or trick. You can grind by jumping on ledges, which then necessitates you keep your balance. A bar familiar to fans of Tony Hawk pops up and it keeps the action flowing without getting too complicated. 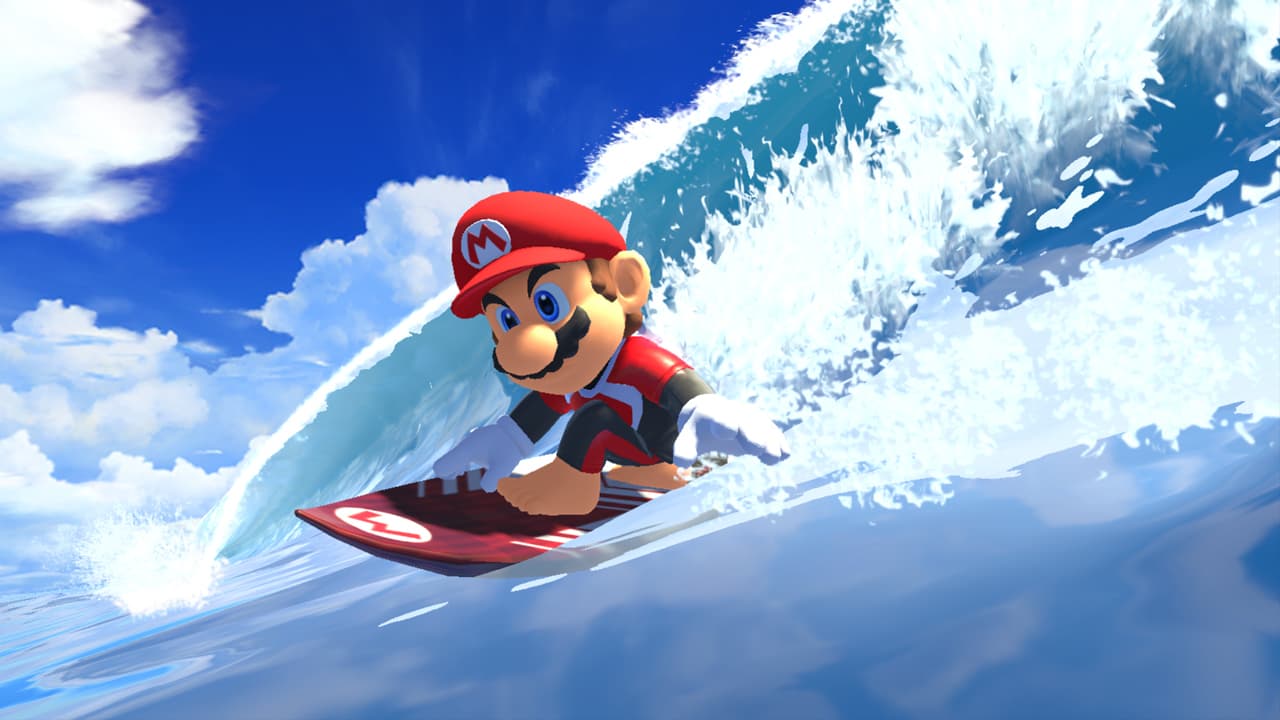 Archery was almost like a third-person shooter with how it felt. The right stick controls your reticle and you make shots by pressing A. You need to compensate for wind, which appears on the screen right underneath your target. It’s very easy to understand and does a decent job simulating what actually holding a bow is about. I have to admit, though, that I kind of preferred the motion controls for Archery.

Gyro-aiming on the joy-con felt very smooth. Pulling back with one controller and pointing with the other comes off as second nature, which is something you can’t really say of most Wii Remote games. It seems like the entire mini-game was built around the shape of Nintendo’s input device, too, because holding the controller improperly would result in reversed controllers.

Still, I can’t fault Sega for including a more traditional control scheme here. Archery becomes trivial when you can just fine tune everything on the joystick, but options really are the best route to go. All of the mini-games in the E3 demo were like this, too. That selection included Archery, Karate, Surfing, Skateboarding, and Hurdle Jumping. A few of the other games may require motion controls, but I can live with that seeing how well they’ve been adapted to each event present in the demo.

Sadly, the tease of 8-bit sprites from the Nintendo Direct conference was not being shown off at E3. I had asked Sega what was going on with that, but they weren’t ready to reveal anything. I’m hoping it amounts to 2D versions of each event, which would be incredible to behold. An 8-bit Mario throwing Amy Rose is something I need in my life, even if the rest of the game doesn’t match that level of insanity.