Worth at least a dozen words

I’m a terrible photographer. Everyone who knows me has come to accept this fact over the years. My hands are too restless. I can’t frame my would-be subjects without getting flustered. Even a simple selfie – my favorite ironic or drunken photographic technique – winds up looking grainier than a Whole Foods. My inability to compose a meaningful picture would be comedic if it weren’t so damn embarrassing. It’s 2017, after all, and people carry powerful cameras in their pockets. I just can’t seem to make anything look cool.

But I still appreciate good photography as much as I dream of snapping quality shots of my own. It’s going to take a long time until I’m confident in my photographic skills, but I’ve found avenues of practice even in the digital world. There’s been an influx of games that include fully working cameras, many of which have surprisingly robust photo modes. For an amateur shutterbug, the games that encourage players to get behind (or in front) of the lens have been a blessing. 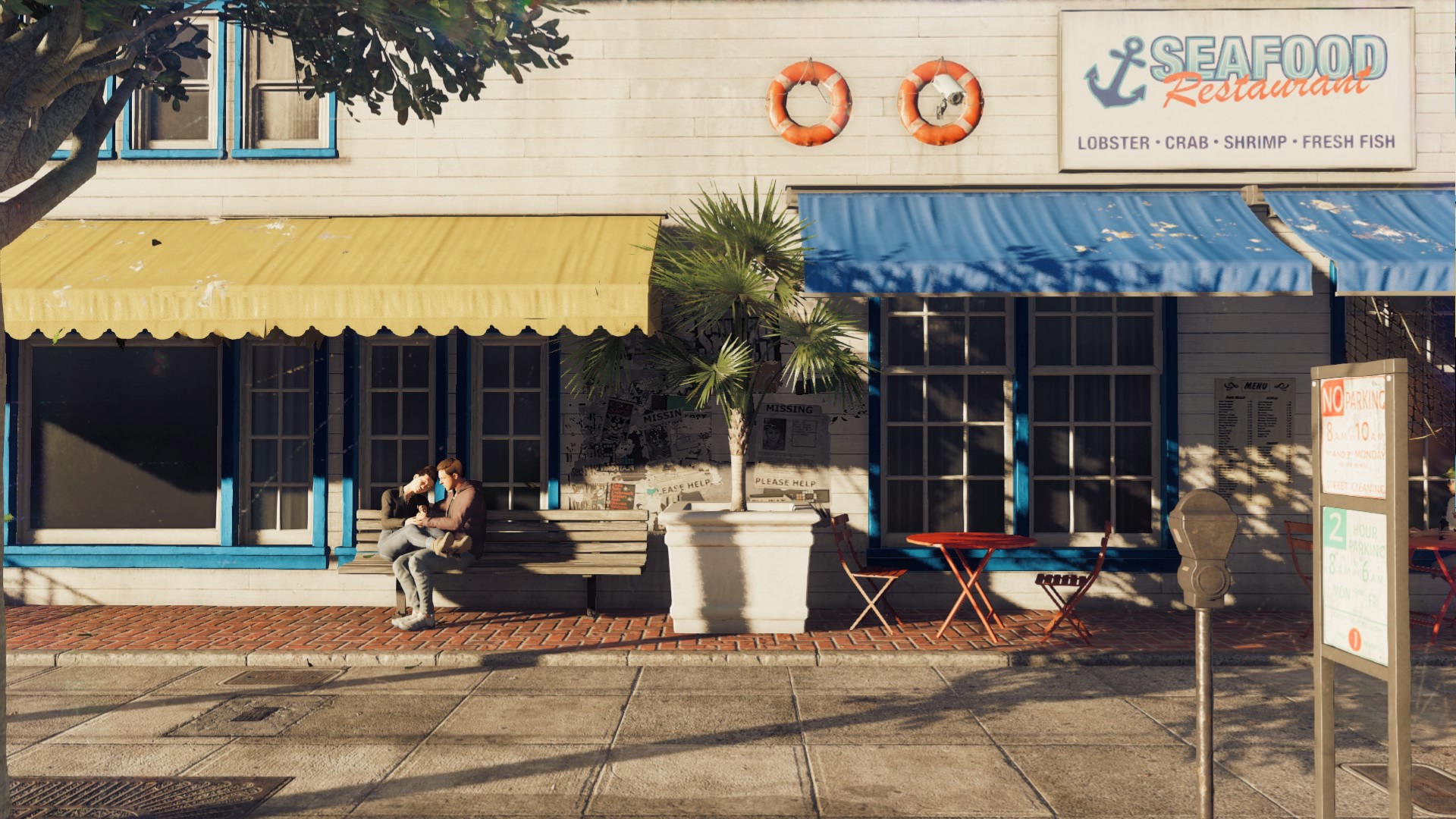 In Watch Dogs 2, hacker protagonist Marcus Holloway is never without his phone. It can trigger a full-on gang war, bring traffic to a halt by overriding traffic lights, and make shit explode, just with the single push of a button. Marcus is also a twenty-something dude, so his phone naturally doubles as a camera and that’s its best feature. My favorite part of Watch Dogs 2 has nothing to do with its story. Hacking’s just not for me, I guess. I do, however, get a kick out of strolling through the game’s digital version of San Francisco as a sort-of wannabe street photographer.

Watch Dogs 2 does an excellent job of making the Bay Area feel alive. Though it’s not the most dense open-world, the NPCs that roam around are a colorful, interesting bunch. There’s a sense of life and movement that punctuates every intersection and neighborhood. People go about their routines, blissfully unaware of the computer algorithm that tracks their motives and desires. As Marcus, cell phone camera in hand, I’m able to follow their movements for a bit. I can capture a single fleeting moment where these digital strangers come to life. 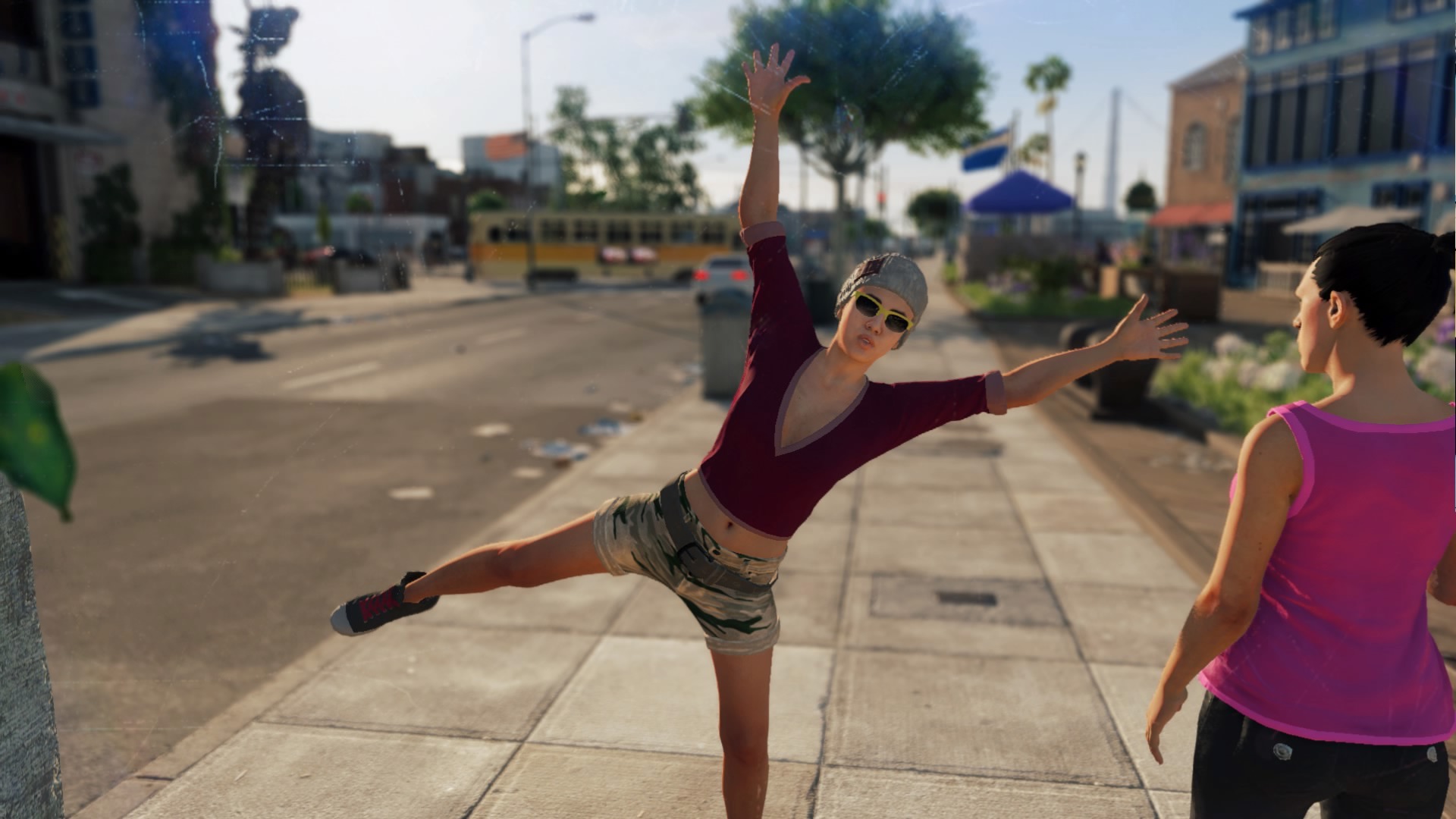 There have been times when I feel like showing off the new bucket hat I bought for Marcus. I’ll stop what I’m doing, whip my phone out, and prepare for a low-angled selfie. Before I can process what’s going on, a random NPC will have stepped into the background, striking a pose. Other times, I’ve wandered down a dark street, only to come across two people arguing. As their heated exchange gives way to a flurry of fists, I solemnly snap a photo, capturing the action in a single, silent frame.

In addition to giving players the ability to take a picture of whatever piques their interest, Watch Dogs 2 rewards moments of photographic self-indulgence. Scattered across the game’s map are specific locations where Marcus can take a picture and upload it to the internet. Like a digital tourist, Marcus’ shots at San Fran [Ray has been swiftly let go for referring to San Francisco as “San Fran” – Ed.] landmarks earn him – and DeadSec, his hacker group – new social media followers. This social currency becomes a form of spendable tokens, granting Marcus new skills and tools for his hacker revolution. 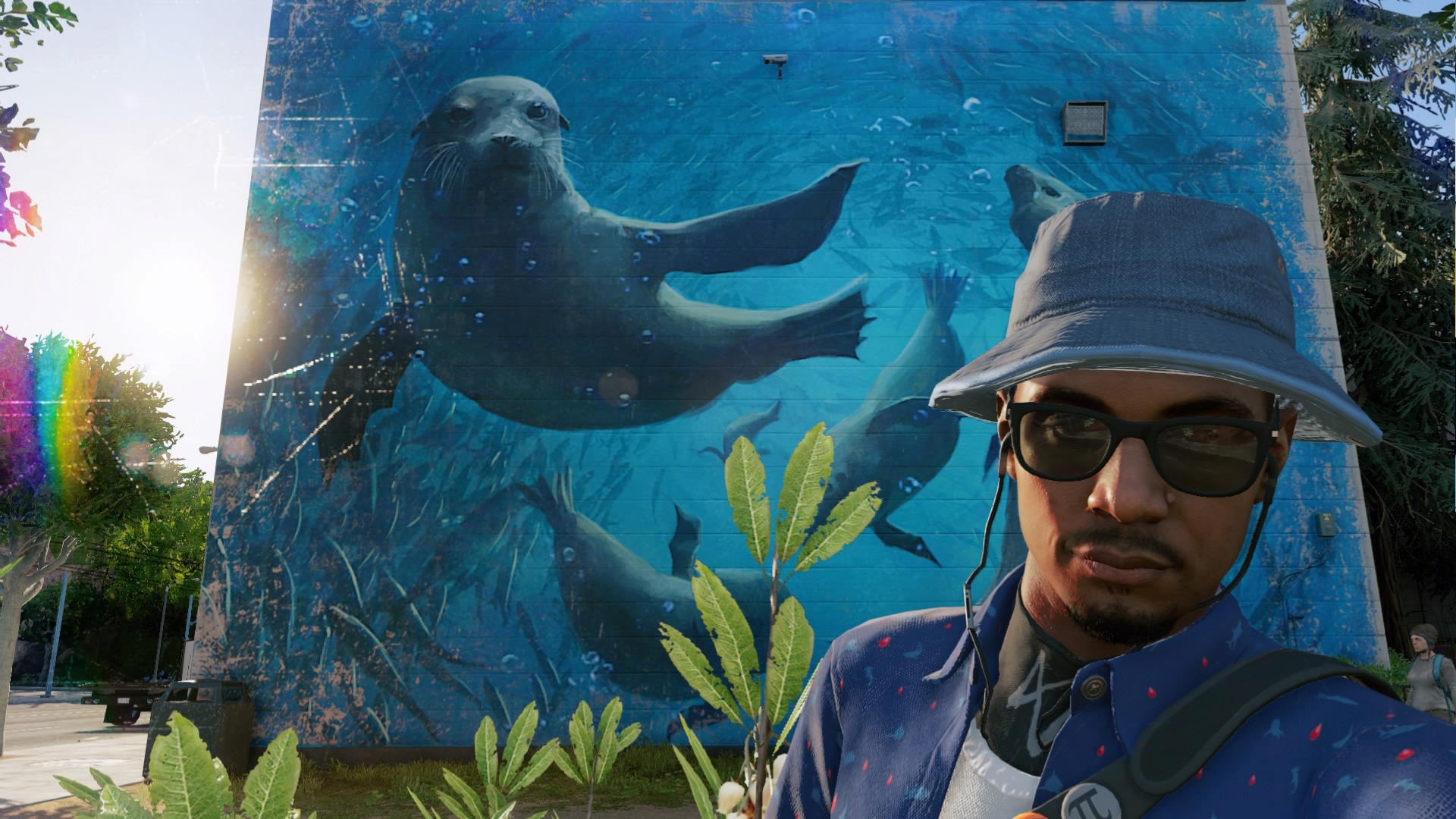 By making Marcus’s cell phone a central part of Watch Dogs 2, the game calls back to our daily lives. It’s damn near impossible to go a single day without seeing someone snapping a quick photo of their food, face, or surroundings. It’s fitting, then, that a game that aspires to be grounded in some semblance of reality would be rife with potential subjects to photograph. The bright colors and upbeat vibes of the Bay Area are full of people idling about, perfect candidates for a quick picture or two.

Final Fantasy XV recently took a different approach by placing a camera in the hands of Prompto. The blond-haired goof is a dedicated photographer committed to documenting his friends’ exploits.

As you play, Final Fantasy XV gives players a steady feed of updates from Prompto’s point of view. It’s a rare glimpse into the “eyes” of a non-playable character that brings Noctis’ journey to life. The random snapshots add emotional weight to events that would otherwise seem innocuous. The constant click of Prompto’s shutter memorializes every long drive, monster hunt, and campfire cookout. 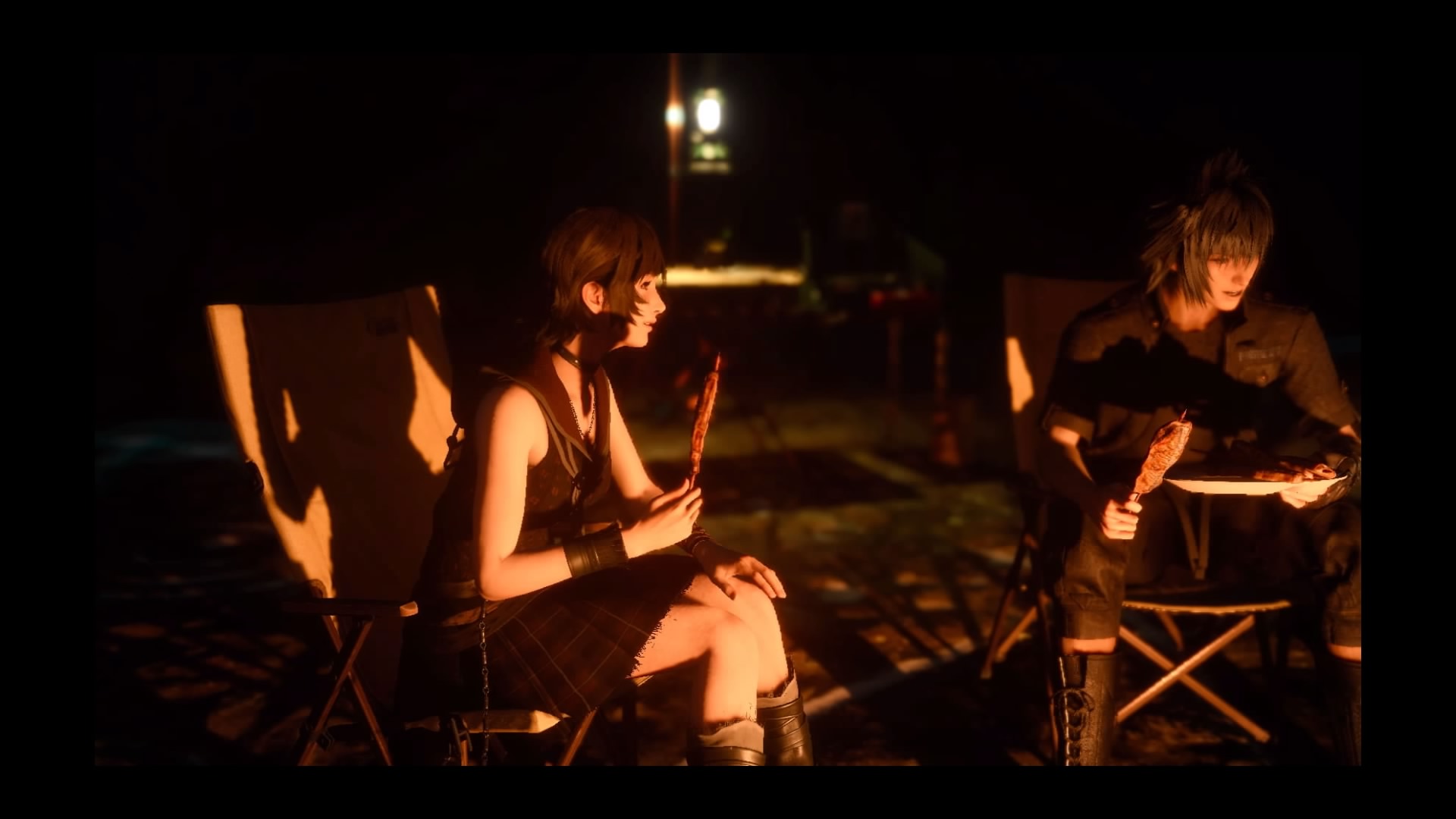 Prompto’s photos are a mix of pre-rendered stills and action shots. There’s an unpredictability to them, which adds to the underlying friendship shared between Noctis and his companions. By capturing the tender moments of their journey, Prompto’s camera becomes an understated, yet undeniably valuable asset in establishing the dynamic of the principal characters’ relationships.

Final Fantasy XV caters to the photographically inclined as well. Its most recent patch gives players autonomy over the camera, allowing for handcrafted shots whenever they please. It’s a welcome addition to a game full of enchanting scenery, fashion-forward characters, and small details. But of all the photo modes I’ve toyed around with recently, Gravity Rush 2 has to be my favorite by far. I can’t think of another game that marries the pure pleasure of a snazzy photoshoot with in-game systems. 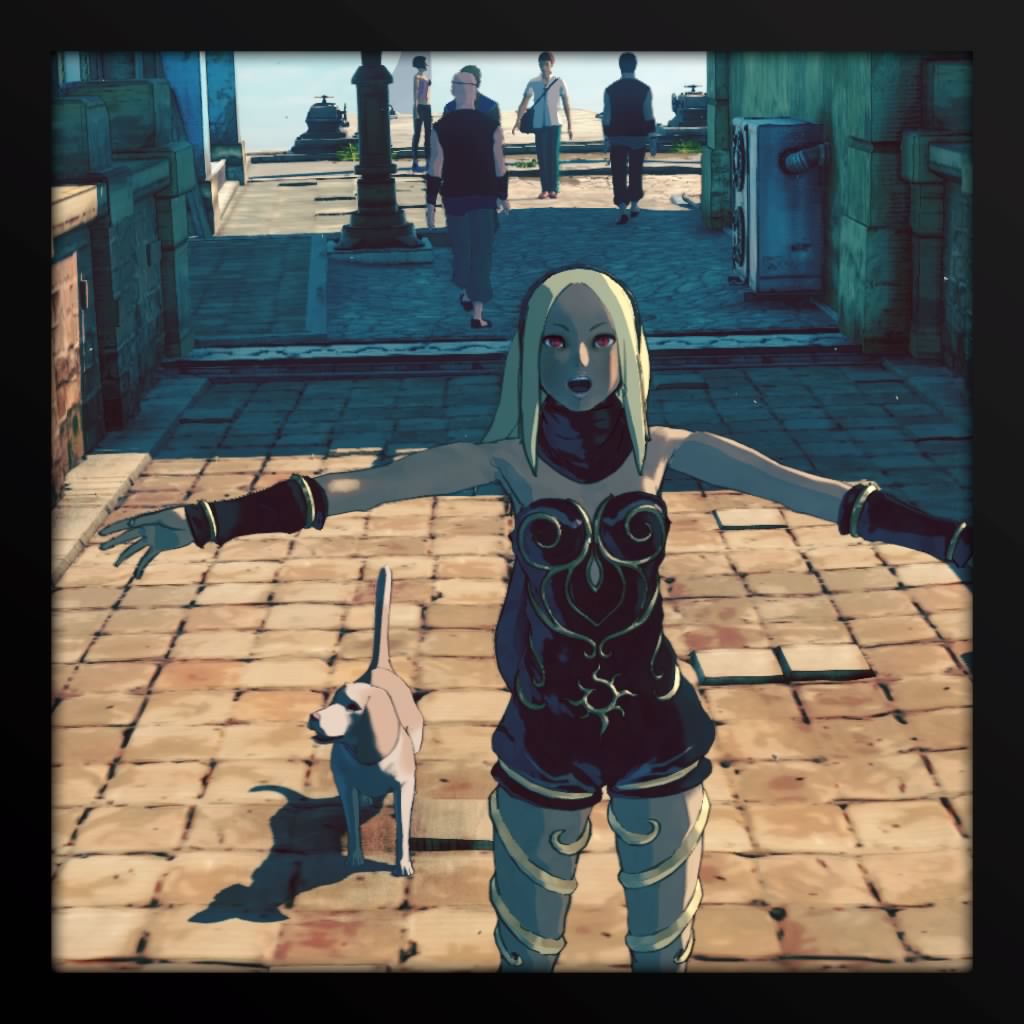 Gravity Rush 2 is a curious game about a girl who can shift gravity whenever she pleases. Kat’s quirky personality and stomach-turning antics translate into a game where players tumble through the atmosphere, walk up walls, and hurl objects through the sky without a second thought. Because of her unique movement abilities, Gravity Rush 2 is awash with floating architecture that facilitates gravity-defying trips from point to point. Islands hover languidly, each one dotted with towers and docks for airships and other vehicles. Islanders mill about bazaars and interact with one another among the clouds, bouncy and upbeat.

With the game’s camera, Kat can pose with the people she meets and document the dazzling scenery. Even the most run of the mill photo (like, say, the kind that an awful photographer like me would take) has a vibrant quality to it thanks to a mix of Kat’s cute animations and appealing scenery that hovers around her.

But there’s more to Gravity Rush 2’s photo mode than pointing a camera at random characters. It’s a core component of the game’s online features. Treasures chests litter each island. They’re hidden on balconies, tucked behind steel girders, and located in other obscure little nooks. Players who happen across them can take a quick picture of Kat and her surroundings before uploading it. Finding one of these pictures works like a map key, pointing players towards one of the apple-shaped treasure chests. Once found, the process repeats itself, guiding the next lucky adventurer to the loot. 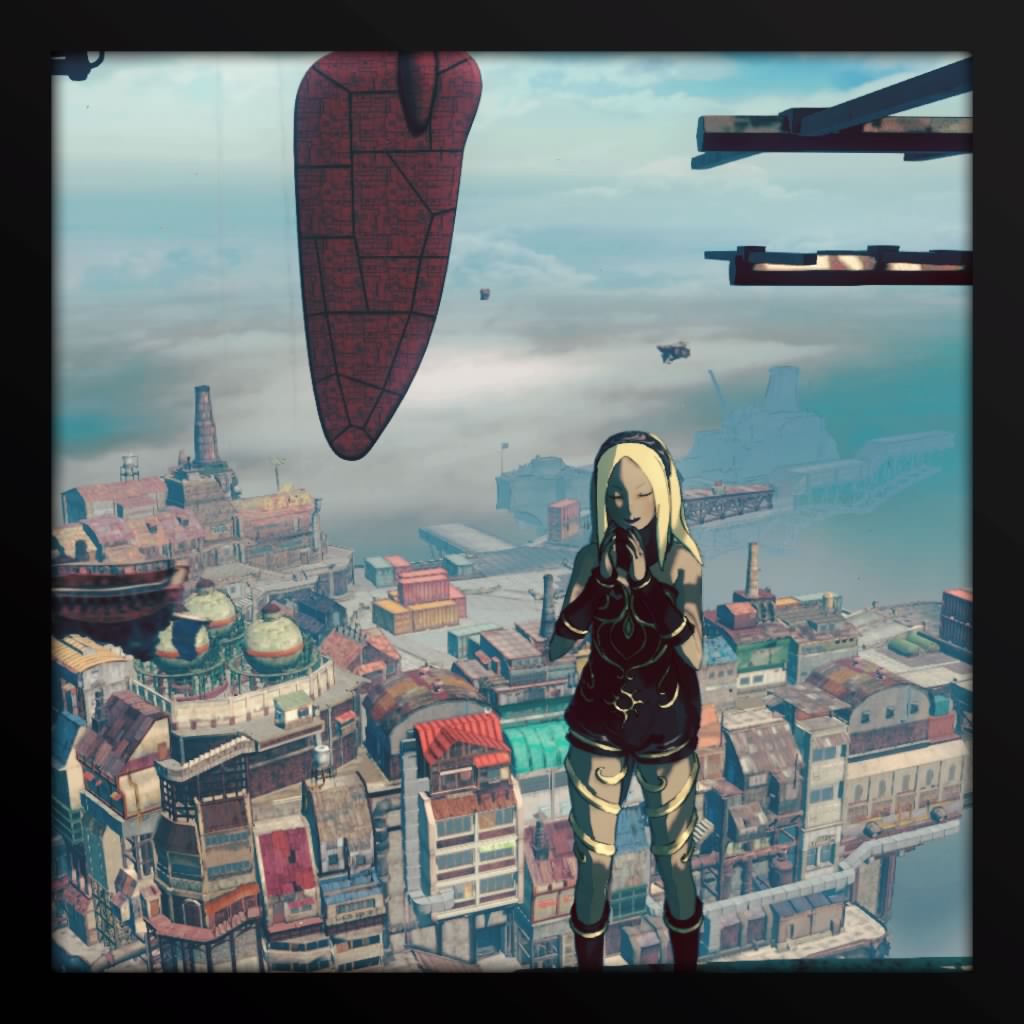 I’ve had a blast scouring islands for treasure chests. Hunting them down encourages you to develop a working knowledge of your surroundings. Learning where a particular building is, or what billboard you can climb to see a slice of the city, lets you – and Kat – hone their navigational skills in an otherwise dizzying collection of floating islands. It’s a subtle touch that benefits players. Just by hunting down treasure and sharing what I found with others, I’ve internalized parts of the city faster than floundering through the sky. 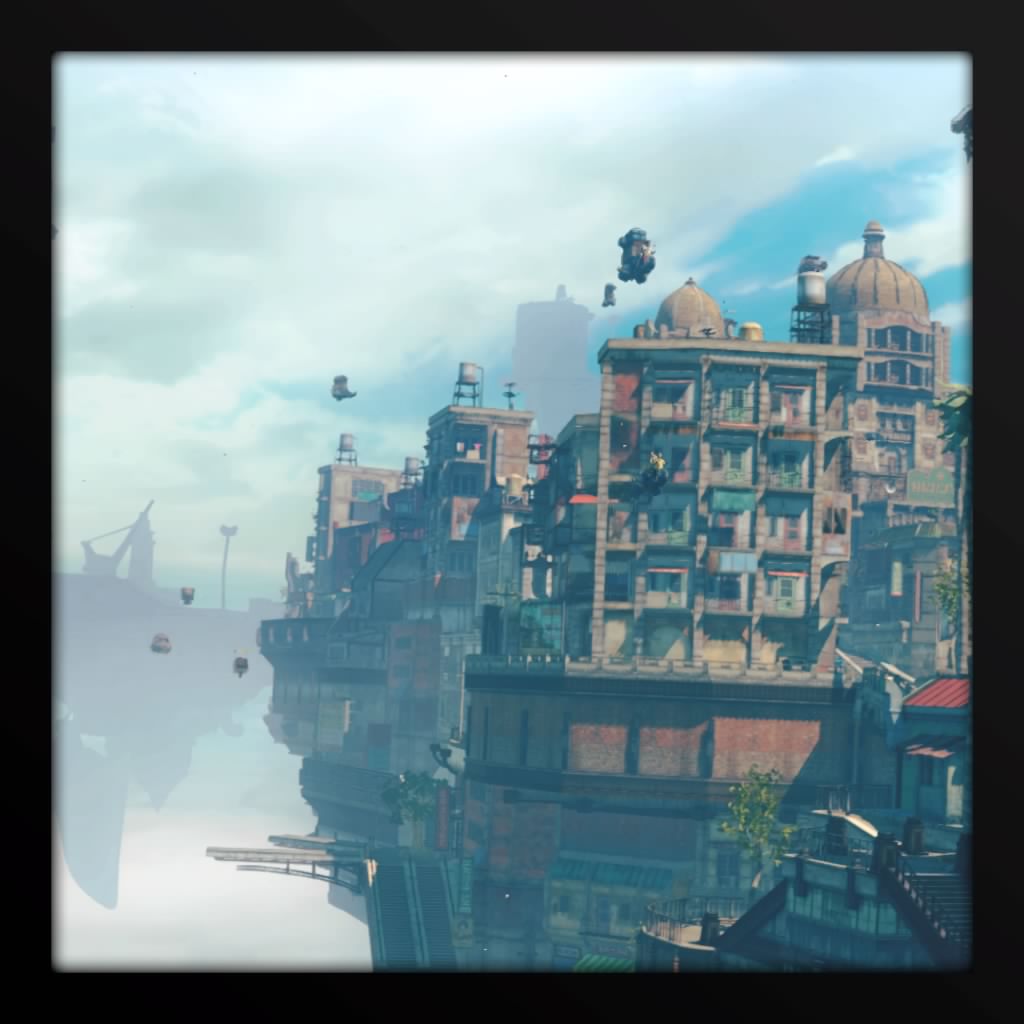 There’s no shortage of photogenic moments in video games. In a sense, virtually every game is designed from the ground up to inspire and be appreciated. The subject matter – from breathtaking architecture to jovial characters – might differ from game to game, but with a working photo mode, even a clueless cameraman like myself can find something worth shooting.