“If I am mad, it is mercy! May the gods pity the man who in his callousness can remain sane to the hideous end!” – Howard Phillips Lovecraft, The Temple

As you might be aware by now, Darkest Dungeon is a visually striking, turn-based role-playing game featuring roguelike elements with a very clever twist. Unlike conventional RPGs, Red Hook’s incorporates a unique system of psychological pressures and their subsequent side effects that run parallel and eventually intertwine with your party’s development, creating an entirely new experience each time that you roll a new game.

As your party gains in experience by adventuring through these darkened and harrowing lands, you’ll follow the familiar routine of periodically upgrading their particular abilities and equipment, making each character a little more effective at what they do as you progress. What makes Darkest Dungeon so singular is that second set of mechanics I mentioned: the Affliction system.

Some side effects of the stresses you’ll endure exhibit themselves as temporary buffs for set periods during the game (such as while in a dungeon, or until you make camp), while others manifest as long-term positive traits, offering helpful stat boosts and situational bonuses. However, most of the time, the changes affected by the horrors you’ll encounter will present themselves as negative personality traits; hindering your party’s performance, and in some instances wrenching your control over your character’s actions, if only temporarily.

It is the wild card, a psychological roll of the dice. This part of your character’s development is mostly out of your control and the results can vary a great deal, ranging from characters that gibber like lunatics in the heat of battle, passing up their turns, to heroes-turned-cowards pushing their way to the back of the ranks, forcing your back-row characters to fight in their place. In some instances I’ve even had members of my party attempt to commit suicide on the battlefield, or self-flagellate in an unsettling display of masochistic ecstasy.

When I say mostly out of your control, I feel I should clarify this by adding that you can remedy some of the afflictions and psychological maladies your party will inevitably suffer, but this treatment will come at a hefty cost. Once unlocked by progressing a bit further in the game, you’ll gain access to some of the different buildings within the village that specialize in offering treatment options and pleasant distractions for your disturbed party members. 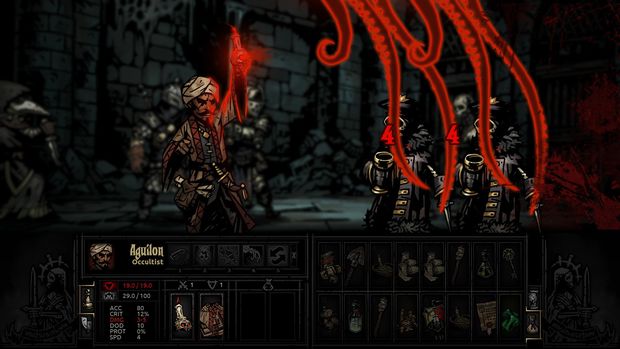 There’s a dingy local tavern where gambling, drink, and prostitution offer a brief respite, and serve to reduce the ever-increasing levels of stress your characters carry. If vice isn’t of interest, there’s also an old abbey you can visit if your characters are so inclined which offers a quiet place for meditation and prayer. Lastly, there is the local sanitarium, offering medieval treatment options which can remove some of the bothersome quirks your party can become afflicted with.

As mentioned before, all of these remedies come with a substantial cost. The treatments and amusements aren’t cheap, and if you do happen to have the gold to spare, those who elect to cure their various ailments will also have to sit out during the next expedition, requiring you to swap them out for an inexperienced adventurer if you don’t have anything better in your roster.

It’s a classic risk-and-reward situation. By investing the money to remove the negative traits that are affecting your party’s performance you may find yourself coming up short on funds when you next need to purchase vital exploration gear such as torches, rations, and medicine. There’s also the maintenance of your character’s personal equipment to keep in mind when budgeting for treatment and stress relief. 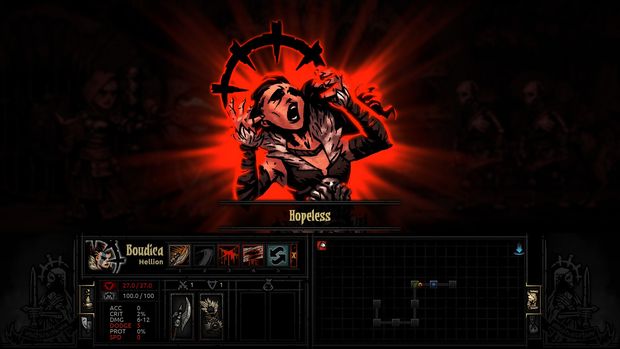 Upgrading armor and weapons as well as the character’s individual skills all cost a good deal of money. Needless to say, Darkest Dungeon will force you to make some very hard choices as you progress; but, that’s all part of fun and challenge the game has to offer.

If you’re feeling concerned that the Affliction system will detract from the experience of what is an incredibly solid turn-based RPG, you can rest easy. On paper it may seem like it may be more than you want to deal with, or that the odds are stacked unfairly against you. But once the game’s in play, Red Hook’s experiment in role-playing game design feels like a natural evolution of the roguelike subgenre, and was never frustrating during my time with it.

Instead of the mechanical RNG-based, slot machine-like feel of other roguelikes, Darkest Dungeon adds a human element to the equation. While still procedurally generated, the game manages to cleverly disguise that fact somewhat by creating unique characters to explore its world with, each one endowed with their own particular flaws and virtues. The tragic heroes almost feel alive in a way that even scripted characters in narrative-driven RPGs can’t manage to recreate.