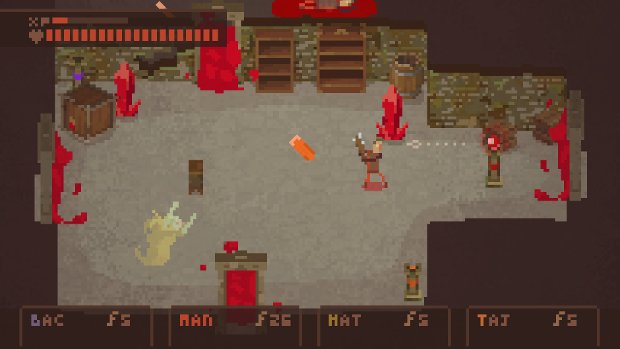 Be a tentacle monster, suction your friends’ faces off

Have you ever been playing a game only to die repeatedly by way of some stupid, annoying trap and thought, “I’d like to be that trap and kill other people?” Well, you miserable sack of bibles, now you can.

Crawl is a four player dungeon crawler coming out this year, and by the (good) looks of it, Adventure Time‘s won’t be the only dungeon I crawl this fall. The twist in Crawl is that your friends play as the assorted monsters and traps in the game. Your homies can play as sword-wielding skeletons, irritating flame traps, and giant tentacle monsters all with the intent of messing you up. When someone kills the hero player, they assume the role and the former hero gets to grief.

The two person team at newly formed Powerhoof has some character behind it, if that well done trailer wasn’t evidence enough.

This is our take on the classic four-player gameplay of Gauntlet, mixed with a Japanese bullet-hell shooter… I guess if you imagined Super Bomberman had sex with The Legend of Zelda you’d have Crawl… and a mental image of some sort.

Sounds good to me. You? Oh, and make sure to peep the adorable Gabe Newell pixel art on their website. Would make for a great boss character.